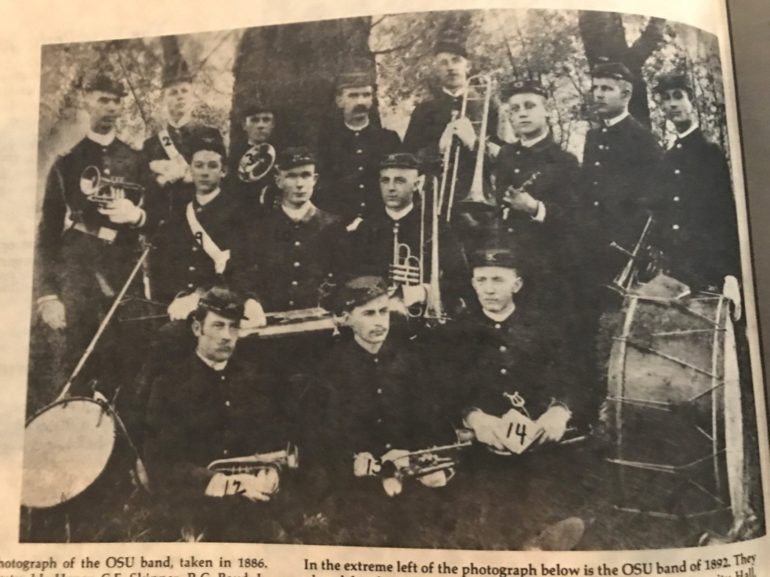 There are few things in Columbus more iconic than The Best Damn Band in the Land, aka The Ohio State University Marching Band.

I couldn’t tell you the first time I heard the Ohio State University Marching Band play. I was probably still in utero. I was in the marching band in high school and although I didn’t attend OSU, I still love seeing TBDBITL perform whenever I can get the chance.

The band seems like something that has just always existed, but all legendary things have a beginning, an origin story if you will.

The history of the OSU Marching Band

The band originally formed in 1878 to assist with military drills at the university and was a student lead organization. In 1896, professional musician Gustav Bruder was hired to lead the band, and its popularity grew exponentially. For the next few decades, the band continued performing both military and athletic functions.

It was during these beginning years that the first known photograph of the marching band was taken. A group of 14 young men in uniforms that are more military than marching band sit gathered around with their instruments, posing for the camera. The members of that group included: W.A. Daugherty, J.L. Haner, C.E. Skinner, R.C. Boyd, L. Bownocker, S.B. Dudley, E.W. Schueller, H. Bell, Nilaere, J.L Norris, Grumon, Fitzgerald, J.D. Dill, and H.C. Bryant.

The beginning of a tradition

In the early 1950s, The military aspect of the band ceased and the program began exploring more artistic and modern musical selections, winding up to the band’s legendary first performance of ‘Hang on Sloopy’ on October 9, 1965.

Over the course of a century, the band evolved, changing with the times, earning its place as one of the most respected college marching bands in the country. Currently, the band is under the direction of Dr. Christopher Hoch, an OSU alum.

If you’ve never had the chance to check out the OSU Marching Band in person, it’s an experience I highly recommend. Of course, snagging tickets to an OSU game isn’t the easiest feat, but don’t worry. You can check out the band for free at one of the most beloved game-day traditions, the Skull Session.

Held at the St. John Arena, the event is basically a giant, pre-game pep rally. The band performs a final run-through of their performance for the day about two hours before kickoff, getting fans hyped before everyone heads over to the stadium.

Just in case you haven’t had enough of TBDBITL, you can take a stroll through the last 7 decades of performances by the Ohio State University Marching band below.