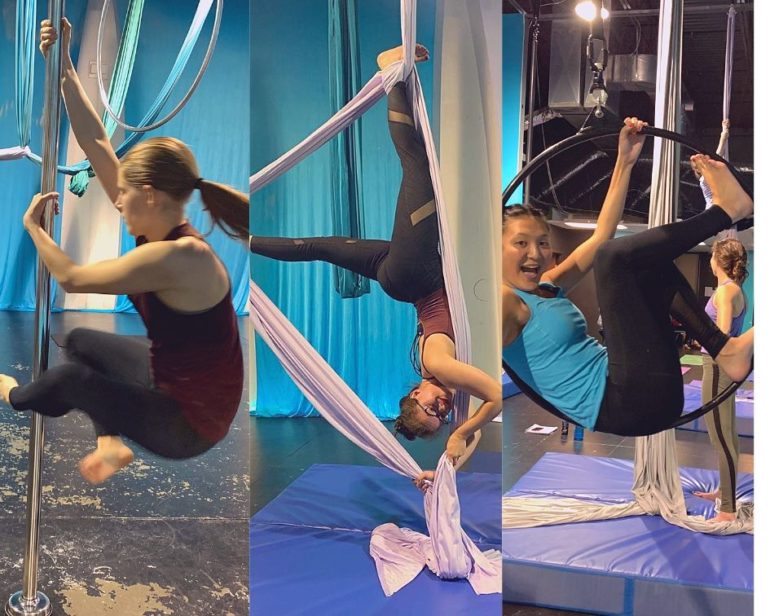 Infinity Aerial Is The Most Empowering Workout Around Town

Infinity Aerial is home to four different types of aerial apparatus’ that let you feel like you’re a superhero.

CEO and Owner Valerie Schrader owned her studio in 2007, going on a mission to bring the liberating exercises and arts to the community. Since her first opening, she has moved locations to accommodate even more apparatus’ since she had so much success at her smaller location.

Our intern, Hannah, and I were both complete newbies, but we headed up to their spot at 9032 Cotter St. in Lewis Center to give it our best shot. I had never done aerial arts before but I was certainly ready to try! I’m so glad I did because it was the most empowering feeling of accomplishment when you did a move correctly. 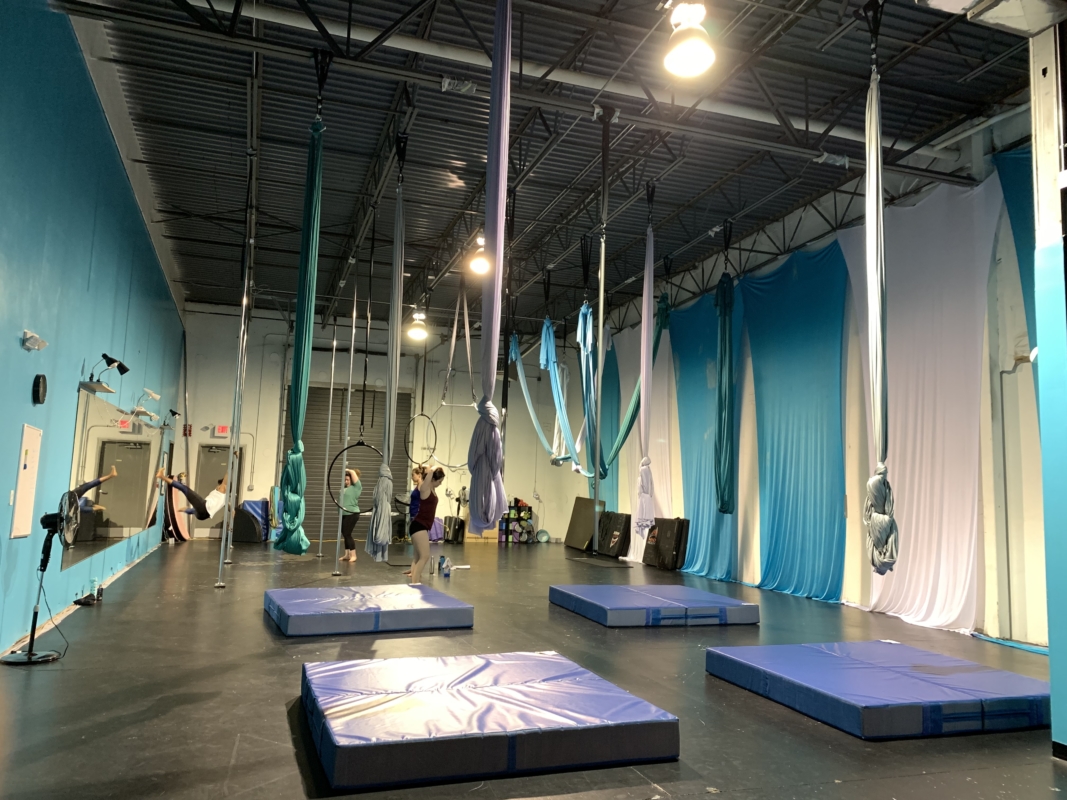 We tried both pole and lyra. What’s Lyra? Aerial Hoop. Think hoola-hoop, suspended from the ceiling. Yeah, I did that. They also offer silks and hammock which I can’t wait to come back to try!

Hannah was a little unsure when I first told her what we’d be doing but she was a trooper!

There are two different types of poles, ones that are static and ones that move. Us newbies were on the static pole until the very end. 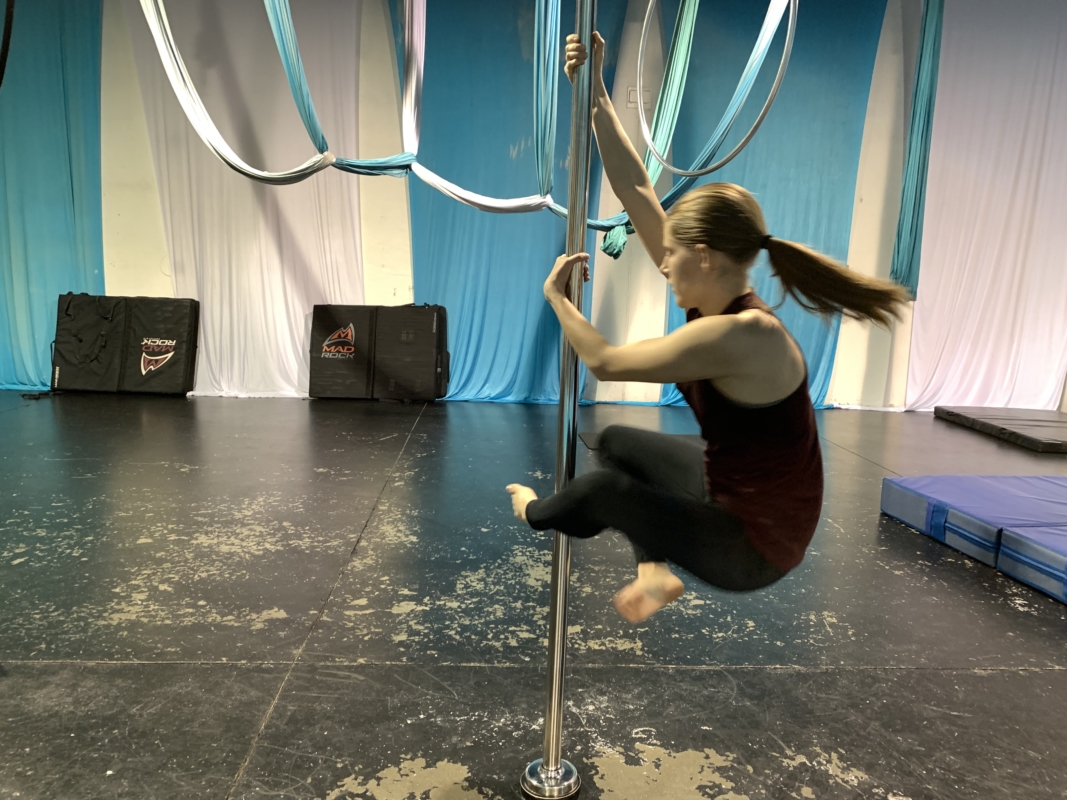 We obviously were in an intro class, but even within the intro classes, there are people of different levels. It was so fun to see the people who had been doing it for a while and how much they could do! 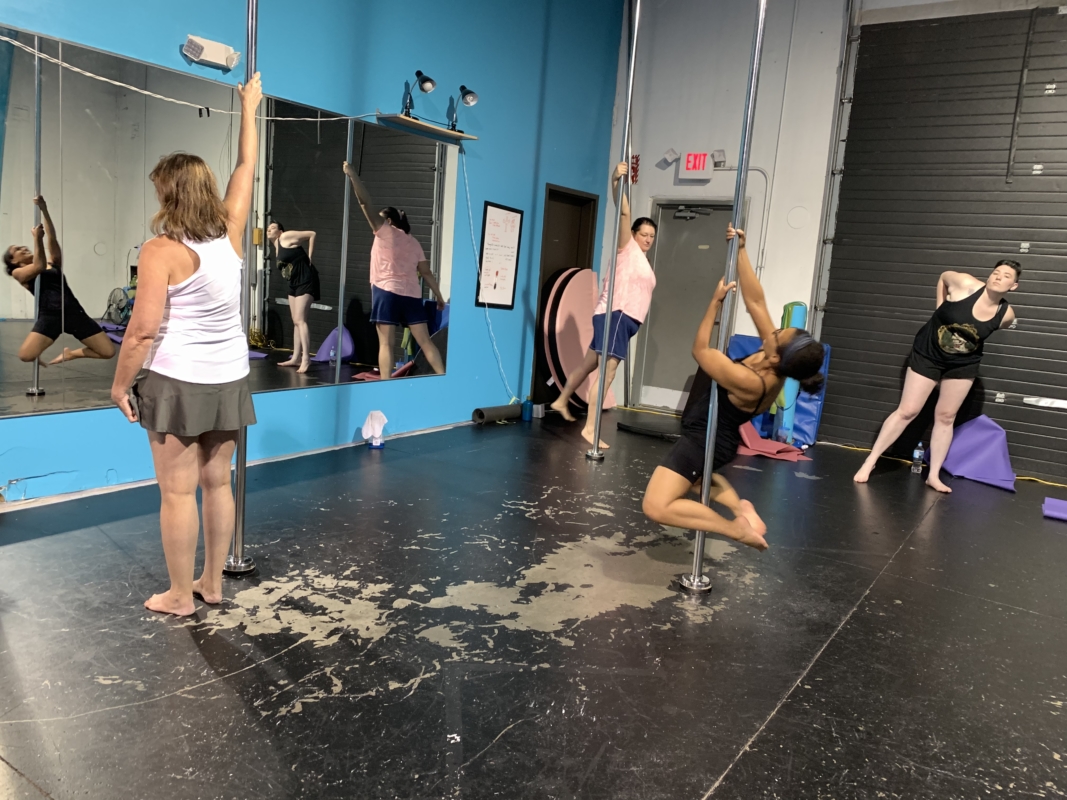 For the aerial hoop class, we were on the lowest-hanging hoop but there were others that flew above my head.

Our instructors were super helpful and talked us through every move. They’re also super encouraging when you do a move right! Doesn’t everybody love for the expert to tell you “nice job”? 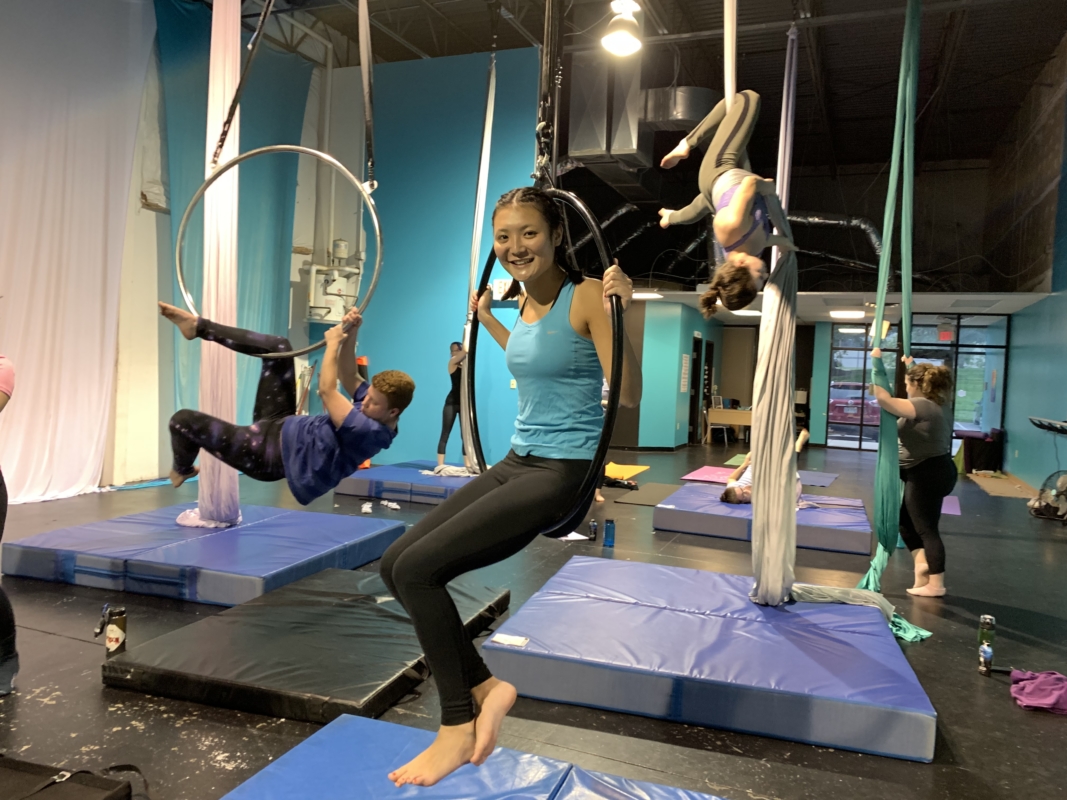 I’d say I did better at pole and Hannah did better at the aerial hoop. Maybe her long legs were getting in her way with the pole? Let’s go with that. 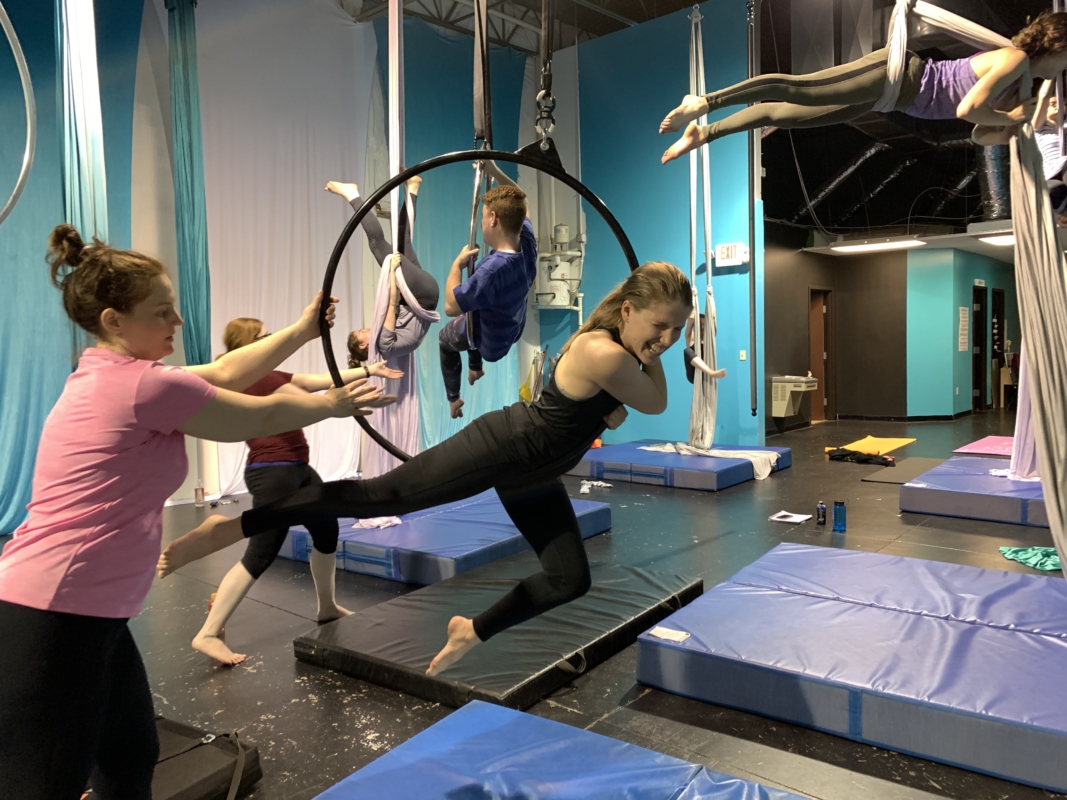 This is me spinning out of control, our instructor had to stop me.

The most satisfying feeling is when you’re trying one move over and over again, and then you finally get it! I was not referring to the move I was attempting in that picture… 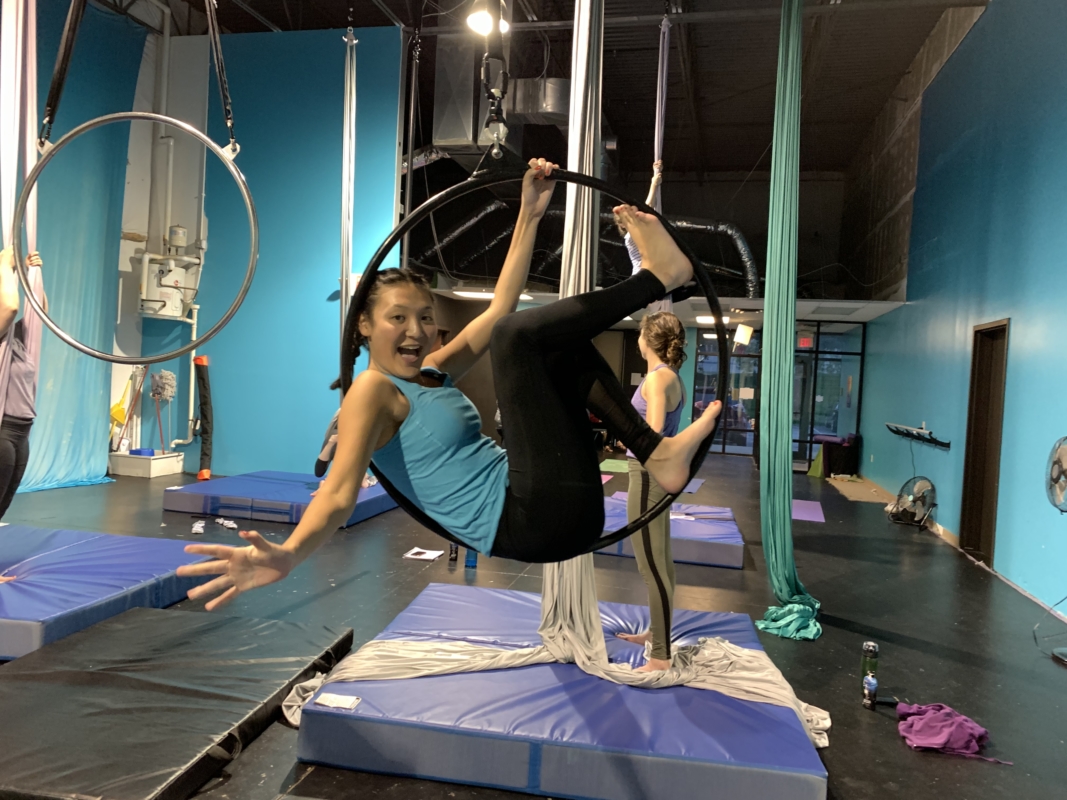 So my final product? The martini (that’s what this fancy move is called) on the spinny pole.

This is certainly a workout to take you out of your comfort zone. It was like nothing I’d ever tried before and I’m so glad I did. Not only did I feel like I was flying, but I felt super empowered to be learning something new and unique.

They offer classes for all ages and all levels. They also have party packages so you can bring your whole crew for the new adventure! For a full list of classes check out their schedule here!