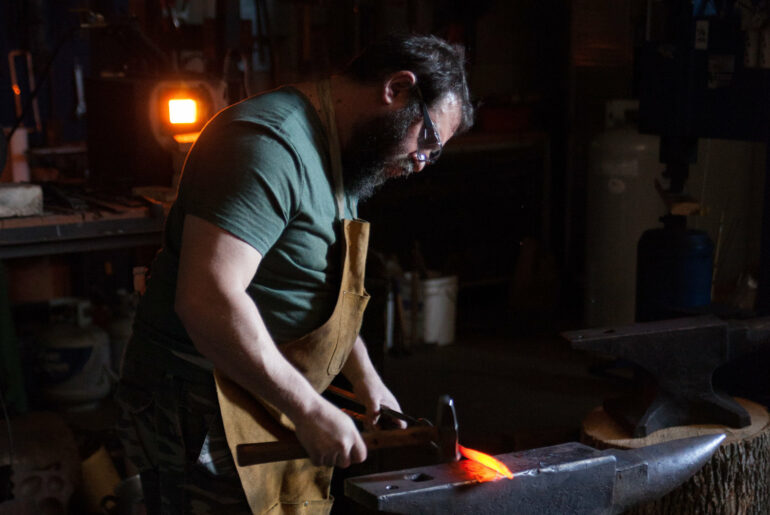 There is a studio tucked away behind Grandview Avenue. It smells like your grandfather’s garage. The clank of metal on metal rings in your ears and the heat hits you like a sauna.

This studio proudly belongs to blacksmith Adlai Stein. Stein is the founder and owner of Macabee Metals and Central Ohio School of Metalwork. Stein was also featured on the History Channel’s popular show ‘Forged in Fire.’ You can watch him in action on season three, episode 15.

After 16 years as a paralegal and hating it for half of that, Stein quit his job. In 2018, he opened Central Ohio School of Metalwork to be a full-time blacksmith and teach the art.

When I first heard “blacksmithing,” I immediately thought of the Renaissance Festival and big swords being hammered out by old guys with large beards and beer bellies. That’s what Stein thought of too.

He got his start working within the reenactment community and a living history blacksmith, Thomas Powers. That is until he met the folks at the Columbus Idea Foundry. They convinced him to try to get a bit more artistic with his craft.

Now he makes sculptures, statues, and unique household items. The most impressive piece I’ve seen is this chandelier made of bronzed steel. It hangs four feet down with bright round bulbs and stained-glass leaves that can all be replaced as the season changes.

Kate Morgan at the Idea Foundry had been encouraging him to give it a try. Finally, after years of brushing it off, he collaborated with stained glass artist Kara O’Dae. She hand-made each leaf, and snowflakes for the winter.

Years of practice have lead Stein to incredible pieces such as this one. In the classes at COSM, you can try your hand at a bottle opener, a coat hook, and of course epic knives and swords.

Each class is roughly three hours long. But to make sure you go home with a finished product, Stein often extends classes. He usually teaches classes twice a week and hosts weekly open studio times. This is a time for those who have already tried a class and want to take a swing at it on their own. You can also come back to finish an incomplete project. Check out the full list of classes here.

Stein and his assistant, Bekah Saika, would sell their work at art shows and festivals around the Midwest. Before the pandemic, they showcased their talents in the Community Tent at the Columbus Festival of Arts.

I popped into one of the coat hook classes to see the novice blacksmiths in action.

To forge their coat hooks, the furnace heats the steel to a temperature of over 2000F.

Columbus residents Becky Luck and Gigi Fried have tried their hands at all kinds of different arts around Columbus; pottery, glass-blowing, upholstery. You name it, they’ve tried it.

“This is definitely the hardest thing I’ve tried,” Becky told me as she wiped a drop of sweat from her brow. “A lot of crafts are very delicate, but not this. This feels like a man’s thing,” Becky said.

Stein was quick to interject, “I wholeheartedly disagree. If you aren’t as strong, you’re just slower.”

When it comes to smoothing out the dents and polishing the final project, the women tend to do better, Stein explained. Because there is less force with each swing of the hammer, the dents are smaller.

The coat hook class is three hours long, but it only takes Stein about 15 minutes to forge one hook.

Stein is very aware of the fact that he’s a walking stereotype. He’s exactly what you think a blacksmith looks like. But he’s working hard to prove that you don’t have to be a white guy with a beard to do this kind of art.

“There’s a lot of amazing women (blacksmiths) and people of color, but they don’t get the spotlight. The main demographic is old, fat white guys,” he said.

Stein welcomes all students ages 16 and up. Younger participants are welcome to take classes with adult supervision. He charges per project. Stein loves his craft, but it’s the interactions with people that drive him.

“My goal is that when someone walks out of here, they’re a better person than when they walked in. They have a new skill; they have a new appreciation for the craft and for art.”

Stein often takes on interns and school groups as part of their community walkabout programs. He tries to find small ways to give back to the Columbus arts community that supported him in his dream.

“You can’t find a better group of people willing to pitch in and help out,” Stein said of the Idea Foundry and the Franklinton arts community.

He gave a Tedx Talk at the Idea Foundry titled “I’m not even supposed to be here.” He talked about his unlikely path from business school drop-out to blacksmith.

Growing up in a traditional Jewish family, his options predetermined. He could be a doctor, lawyer, or accountant, he told me. But working with his hands and being creative was never on the table.

Stein likes to poke fun at the phrase “if you do what you love you’ll never work a day in your life.”

“That’s bullshit,” he said. “I work harder now than I’ve ever worked my entire life. The difference is I like it. And I’m doing it for me and my family and for my clients and customers. It’s because I like doing it that I’m working harder.”