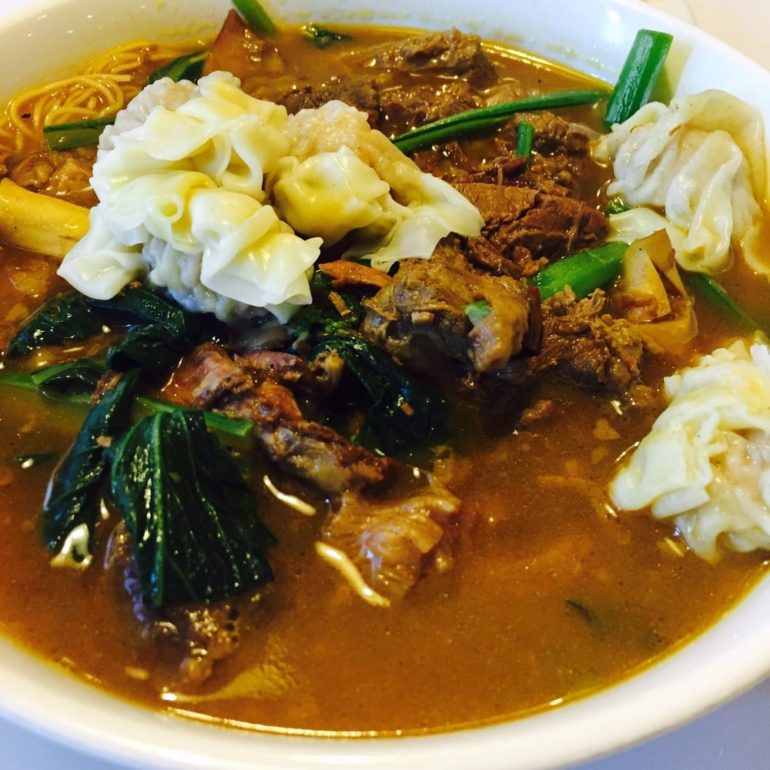 8 Mouthwatering Chinese Restaurants Around Columbus That You Need To Try

I was never one of those picky, “midwestern” eaters as a kid. You know the ones who get chicken nuggets and smile fries at the Chinese buffet instead of actually trying something? I grew up loving Asian food, a love that only intensified while I was living in Hawaii.

When I moved back to Ohio, I felt like there was no possible way I’d find satisfying Asian cuisine, much less a place that could hold a candle to my go-to, family owned, crazy authentic Chinese eatery in Hawaii. I was totally wrong. Sure, Columbus has plenty of “American” Chinese take out places, but we also have some insanely delicious restaurants that are offering both authentic and unique cuisine.

Confusing though its name may be, Jiu Thai actually serves Shaanxi Chinese food, not Thai food. It’s okay, it threw me off the first time too. It’s not every day that you can find authentic tasting biang biang noodles in the middle of Ohio, so if it’s an experience you’re waiting to check off your bucket list, I highly suggest Jui Thai. Oh man, I almost forgot. Don’t forget to try the cold noodles. Trust me, you won’t regret it.

This is your typical, American Chinese takeout. I would never suggest this first, not because the food isn’t good, but just because it won’t be pushing you out of your comfort zone anytime soon. If you aren’t feeling adventurous, you can go with the old stand by’s, the typical American take out options. But there are often specials that are made to order, which improves your chances of them being perfectly cooked and extra delicious.

Don’t give me that look, I know what you’re thinking. Another Americanized takeout place. But I just cannot in good conscience leave Peking Dynasty off this list. Not only are they insanely fast and nearly always the happiest part of my day, they have some delectable food. The Hunan chicken combines two of my all time favorite things, spicy flavor and water chestnuts. But for those of you who don’t like the heat, they have plenty of options you’re used to seeing, like sweet and sour chicken, General Tso’s, etc.

DIM SUM. Enough said. Okay, since you begged, I’ll elaborate.  One time my boyfriend and I just happened into Sunflower, and it was a meal I’ll never forget. There is something so amazing about ordering off of a cart when you basically have no idea what it is that your ordering. So often, we see words in food descriptions that terrify us. But if it looks delicious, and it smells delicious, and it tastes delicious, then who cares what it is called… am I right? So do yourself a favor, just go with it. Enjoy some congee or hot pot rice. You can thank me later.

Confession time. Cantonese style Chinese food is my favorite. I know, so basic, but I don’t care. The flavors are amazing and what can I say? I love garlic. I grew up eating at Ding Ho’s West Broad St. location. Perhaps it’s part nostalgia, but I would venture to say that personally, it’s my favorite Cantonese food joint in the city. There are plenty of options for the picky eaters in your party, but for the daring ones, the ones who came here ready to conquer their plates, please try the Pineapple Duck.

Lucky Dragon is the perfect Chinese restaurant to take a big group of friends. You can order tons of food conveniently, the rotating table top makes for easy sharing. The best-salted pork I’ve had in my entire life was at Lucky Dragon, so I’d be remiss not to suggest it to you. It is on the hot side, after all, it is called Spicy Salted Pork Chop, but it’s worth it. Just order some extra water and some creamy crab rangoon. You’ll be alright.

Tai’s Asian Bistro was introduced to me a few years ago by a friend, and it’s been one of my favorite places to eat ever since. There are two different menus here, Chinese food and Japanese food, and while both have some YUMMY treats to offer, we’re going to focus on the Chinese options. Like every place on this list, there are some Americanized options. Tai’s may not be the most authentic place on this list, but it is affordable and appetizing. As you now know, I’m a fan of all things Cantonese, so my go to at Tai’s is the Cantonese Chicken Chow Fun. I have on occasion ordered the Dan Dan noodle bowl, and on those occasions, I couldn’t have been more satisfied.

If authentic Szechuan is what you’re after, then Fortune is the place for you. I’m going to be honest with you, the first time I went here, I wasn’t sure about this place. I had some weird service and my food was not as amazing as I expected it to be. If I was one of those serial Yelpers, I’d probably have written some passive review, left 2 stars and called it a day. But because I’m a human being who knows that sometimes other human beings have bad days, I gave this place a second chance. And then a third, and a fourth, and now I can’t even remember how many times I’ve eaten at Fortune. First of all, the dim sum here is pretty great. As I mentioned earlier I lived in Hawaii for a while and finding taro dumplings here in Ohio, dumplings that were not only nostalgic but totally delicious… well that pretty much sealed the deal for me.

I think I’ve made it pretty clear that I love Asian food. Which means I would be thrilled for some suggestions. I know there are many, many more Chinese food restaurants that weren’t included here. And I want to know about them. So please, tell me what I’ve missed and what your favorite dishes are! I want to hear all about it.