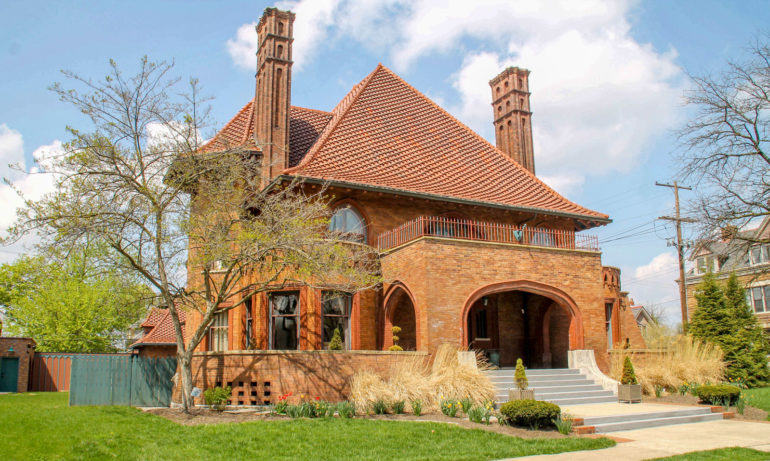 Brush off your history books, friends. We’re going back in time.

The year is 1895. Peter Sells, of the famous Sells Brothers Circus, hires local architect Frank Packard to design an epic house for his wife, Mary. The home becomes a mix of styles, from Gothic to Romanesque, and even includes a few nods to the circus life with brick details that mimic the fringe of a circus tent.

Over the course of the next 100 years, the house would go on to become one of the most iconic mansions in Columbus. Overlooking Goodale Park on Dennison Ave, the 7,414 square foot home has 5 bedrooms, 5 bathrooms, and tons of incredible perks like a beautiful swimming pool and geothermal heating. That’s not to say that the house hasn’t seen better days.

The home had been restored by former owners Dave and Erica Brownstein and remodeled by former owners Fritz and Karina Harding. After the home was purchased by Weston Wolfe who added a pool and made other renovations, it drifted into disrepair.

The home was foreclosed on in January and headed to auction on July 22. The Circus House was purchased at auction for $873,400 by Paige and Jason Henry. Now that the Henry’s have taken over, it’s clear exactly how much damage had been done to the property.

According to a recent report in The Columbus Dispatch, “Electrical boxes were ripped from walls, plumbing smashed, flooring pulled up, mirrors shattered, downspouts removed, and tile, wood trim and mantlepieces torn off. Even the electrical line from the street to the house was severed.

Walls were peppered with holes. Pulleys and weights were stripped out of window frames. The original 1895 banister had been separated from its spindles. Decorative plaster molding around door arches was smashed.”

Paige and Jason have now put together a team of designers and architects, already obtained permission from the Victorian Village Commission for a few changes, and set out to get the home back to its former glory.

I think I speak for most of Columbus when I say, we’re rooting for you Paige and Jason! This iconic house deserves some love.