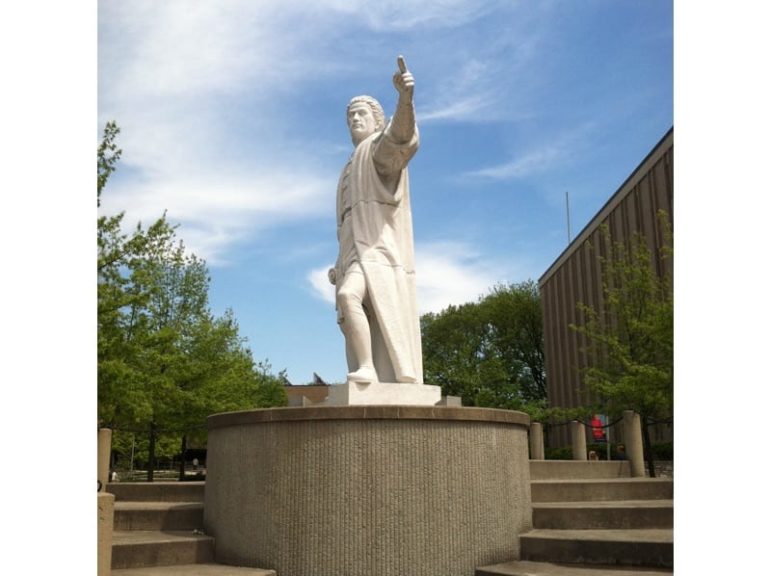 People Are Asking If Christopher Columbus Statues Should Be Removed. The Answer Is Yes. Probably.

After the events in Charlottesville, a standard alt-right talking point concerning removing Confederate statues has been of the slippery slope variety, asking when will it all end?

Conservative dipshit: if we remove confederate statues next we'll have to remo–
Me: yes. however you end that sentence is likely dope.

This argument has even come to our city:

If #RobertELee is to be erased from history, why not erase #ChristopherColumbus whose arrival ignited genocide of Native Americans?

This Columbus statue came to the city in 1986 after spending decades in Barrington, Illinois. It was restored by famous local sculptor Alfred Tibor, which is certainly a point in favor of it’s existence. 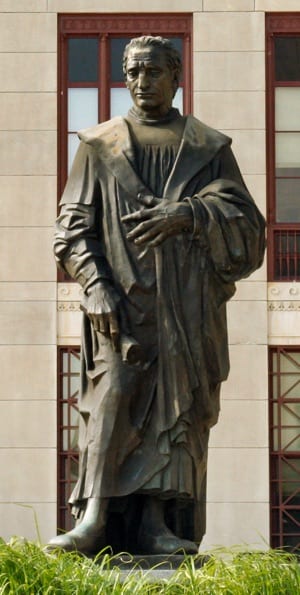 The City Hall statue was given to the city as a gift by the city of his birthplace, Genoa, Italy in 1955.

This Columbus statue was commissioned for the 400th anniversary of his voyage, and made its way to the Statehouse in 1932.

We narrowly dodged a bullet in the early 90’s when a Russian sculptor wanted to gift the city with a 600 ton monument that stands 350 feet tall. 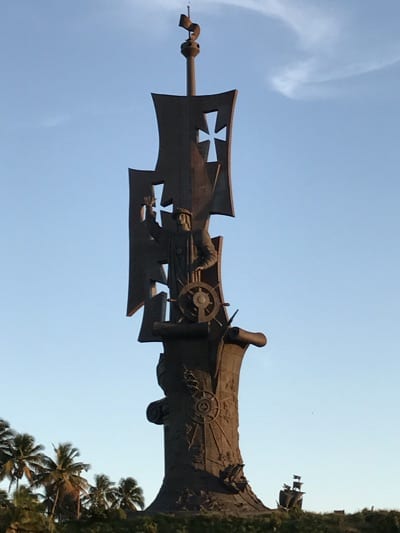 Yikes. This would have been one of the 15 tallest structures in Columbus.

This is problematic with Christopher Columbus.

Let’s get the obvious out of the way first. Christopher Columbus was a perpetrator of genocide. Many people know that fact at this late date, but actually reading about what transpired is more visceral than just hearing the word “genocide.”

In the province of Cicao on Haiti, where he and his men imagined huge gold fields to exist, they ordered all persons fourteen years or older to collect a certain quantity of gold every three months. When they brought it, they were given copper tokens to hang around their necks. Indians found without a copper token had their hands cut off and bled to death.

The Indians had been given an impossible task. The only gold around was bits of dust garnered from the streams. So they fled, were hunted down with dogs, and were killed.

Trying to put together an army of resistance, the Arawaks faced Spaniards who had armor, muskets, swords, horses. When the Spaniards took prisoners they hanged them or burned them to death. Among the Arawaks, mass suicides began, with cassava poison. Infants were killed to save them from the Spaniards. In two years, through murder, mutilation, or suicide, half of the 250,000 Indians on Haiti were dead.

Stop and consider how bad life has to become for a community to think mass suiciding and killing their young is preferable to staying alive.

The other argument against honoring Columbus is that he undertook a journey that had been completed before. Not just by the Vikings, who definitely left settlements in North America, but at many other points in history. Some theories are shakier than others, but it’s likely that many ships sailed to North America before Columbus. In addition, there were millions of people already here, meaning nothing was “discovered” when Christopher Columbus landed in the Caribbean. Humans have been in North America for at least 20,000 years.

What are we honoring when we honor Christopher Columbus with these statues?

I think, in the end, we’re honoring that genocide. Because what was remarkable and noteworthy about Christopher Columbus, probably the main noteworthy thing, was that he was the first to open up the Americas to Europe, the first to bring the murder and disease to the North American continent that would wipe out 90+% of the existing population.

New York City is doing a review of symbols of hate on city property:

After the violent events in Charlottesville, New York City will conduct a 90-day review of all symbols of hate on city property.

It feels like an appropriate moment for other cities to consider doing the same.

How would Columbus residents feel about removing our Christopher Columbus statues?

It would probably be one of the biggest local controversies in quite some time. A difference between Columbus and the Confederate controversy is just how much time has passed. After 500+ years, it’s fair to imagine that many don’t even view Christopher Columbus as a real human being, but as more of a story. This is appropriate given what is taught about him in schools is nearly all fabrications.

Regardless, it’s a time for considering what we collectively want from our public spaces, and to ask ourselves how we feel about honoring a perpetrator of genocide.