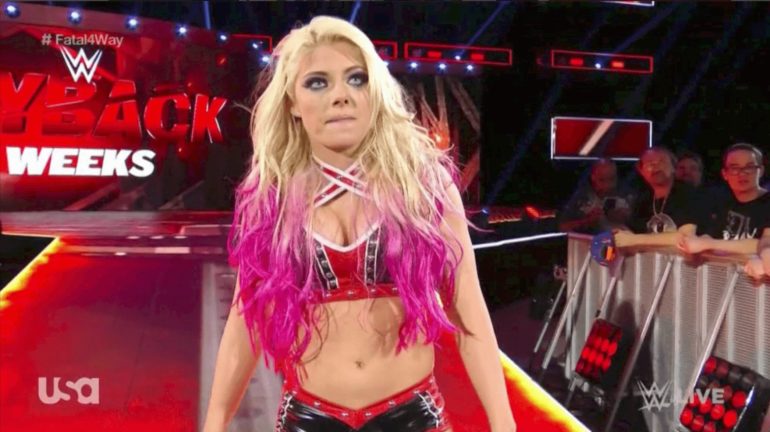 Alexis “Lexi” Kaufman, known in the ring as Alexa Bliss, returned to her hometown last night to duke it out in the Fatal 4 Way at the Schottenstein Center.

The WWE Diva grew up in Columbus, Ohio and has fought her way to the top, fighting not only her opponents in the ring, but her own demons. Fans can catch the title fight on April 30th as Alexa Bliss faces off against Bayley, the current RAW Women’s Champion.

Alexa Bliss made her debut appearance on WWE RAW earlier this month. The feisty up-and-comer was drafted as a “Superstar Shake Up.” Last night Kaufman defeated Nia Jax, Sasha Banks and Mickie James in the fight.

Your new #1Contender for the #RAW Women's Championship is non other than Columbus' own @AlexaBliss_WWE! pic.twitter.com/GfeI5c4ZiM

Kaufman has always been an athlete. Competing in sports like gymnastics, cheerleading, and bodybuilding led her to discover her true calling: the WWE ring. She signed with World Wrestling Entertainment in 2013 and was featured on their television program “NXT.”

The young woman from Central Ohio literally battled her way to the top and was drafted to the WWE SmackDown in 2016. Last night, Alexa Bliss showed that she means business after winning the Fatal 4 Way.

She won the WWE SmackDown Women’s Championship in December of last year, her doubts about joining the sport disappeared.

“Everything that we had gone through—whether it was in gymnastics, cheer, my eating disorder—and my parents saying to me, ‘What are you going to do with your life? Do you want to be a statistic? Or do you want to make something of your life?'” said Kaufman in a YouTube video uploaded by WWE. “The fact that they were able to be here for one of the biggest accomplishments in my career. It all makes up for it now.”

The confidence that Kaufman exudes in the lights of the WWE stage was not always there. The wrestler battled an eating disorder through much of her teenage years. The fight with anorexia landed her in the hospital for a short time. After learning that one in every four people with anorexia will die from the eating disorder, Kaufman decided she did not want her life to “amount to another statistic.”

Despite the rocket to wrestling stardom, Kaufman remembers, and appreciates, where it all began.

So good to be home 🖤 #Columbus #coffee #happyeaster