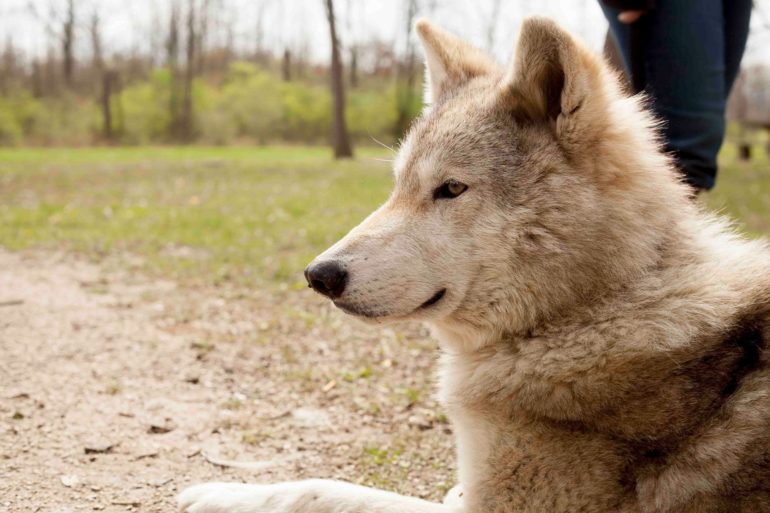 The last wild wolves roamed Ohio in the mid-1800’s.

By the time wolves became protected as an endangered species in 1972, very few ancestors of man’s best friend roamed free in the United States, with the exception of Alaska. Although wolves are not expected to return to Ohio, Columbus has one unique opportunity to learn about these majestic and often misunderstood animals.

Ironwood Wolves is a USDA licensed educational facility, providing invaluable experiences to people of all ages. All of the ambassador animals are trained by Rachel Lauren and Matt Emmelhainz. “When I was a student at CCAD I worked with all kinds of animals. I noticed the positive reaction from the public and saw ambassador work as a way to educate and reach all kinds of people,” said Rachel Lauren, owner of Ironwood Wolves.

“I decided to start my own program so I adopted Lucian in 2012 from a rescue in Texas. The people who had him could no longer keep him, so they did the right thing and gave him to a wolfdog rescue. I searched for a long time because I knew I didn’t have the time to train a pup. That’s a full-time job in itself, training them to get used to people, car rides, and sounds. It’s a lot more work than a puppy. It’s more similar to training a horse, desensitizing them. So I adopted Lucian and trained him for several months, and almost a year later is when I applied for my USDA license.”

“They’re not anywhere near wild,” Rachel explained. ” They don’t miss being in the wild because they don’t understand what it’s like to be wild. They rely on humans to take care of them and they like interacting with people.” All of their animals are from captive-bred lines, including their two ambassador foxes, Obi and Vincent.

Most of the work done by Rachel and Matt’s animals is educational. One of their biggest educational outreach activities is through Columbus Metropolitan Libraries. The ambassadors go with their owners to teach local communities about wolves, aiming to dispel myths and legends that surround the species.

For some, it’s hard to understand the relationship Rachel and Matt have with their animals.

“A lot of people will accuse us of abusing our animals, or say that they hate what they’re doing or that they’re stressed,” said Rachel. But she insists that if people saw for themselves how excited the ambassadors are to meet people, they would change their minds.

“Just come to one of our events and see, they don’t hate it. They like to go out, and they actually get really upset if there are a couple of days when they don’t go anywhere. Today, Logan hadn’t been out in a few days, and he wanted to come out so badly. But I had to tell him that it was Cana’s turn today,” she laughed.

The ambassador wolves at Ironwood are impressive. The most striking of the animals has to be Rachel’s first ambassador wolf, Lucian. “He doesn’t do photoshoots anymore, he’s semi-retired. I still shoot him, but I don’t let clients anymore. It’s the color with Lucian, that people are more struck by.”

Although Matt and Rachel have grown their business since 2012, they’re still looking for new ways to educate the public about wolves and foxes.

Their immediate future may not include adding more wolfdogs, but that doesn’t mean they aren’t looking to expand in other ways.

“We’re good with wolfdogs right now. There may be a surprise coming up, in the next few weeks,” teased Matt.

For more information about Ironwood Wolves, their educational outreach, and other services they provide, please visit their website.