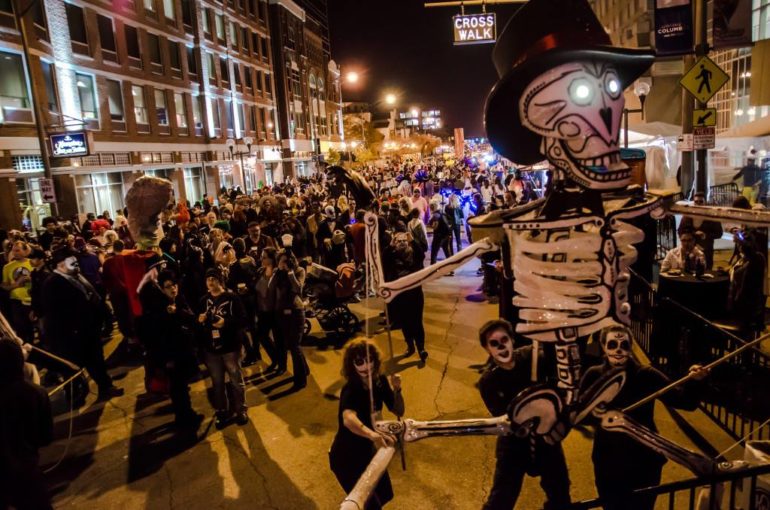 You can be lame and binge watch a bunch of horror flicks by yourself. Or you can put on a costume, go out, and have yourself a time you won’t soon forget.

Look, I know we’re all super stoked for the second season of Stranger Things to drop this Halloween. Who wouldn’t be? But the truth is, that show is going to be waiting in our Netflix watch lists until we decide to watch it. Now’s not the time to hunker down by ourselves and Netflix binge in the loneliness of our living rooms. Halloween is, quite possibly, the best party holiday of the year. It’s time to get weird, costume up, and hit the streets as we howl into the night. Here are some of the best parties going down this week and next. Don’t be lame, go out and paint the town dead. Get it? Dead?

October 27-29 Old North Arcade, 2591 N High St, Columbus, Ohio 43202
Why you want to go: Like I said, we all have Stranger Things on the brain this year. Why not nerd out and put on your best Stranger Things cosplay while you party it up. You know you want to.

October 28 Skully’s Music Diner, 1151 N High St, Columbus, Ohio 43201
Why you want to go: It’s one of the biggest Halloween costume parties in the city, only the tragically unhip would miss it. Besides, Skully’s layout and space make it perfect for any late night shindig.

October 26 Park Street Cantina, 491 N Park St, Columbus, Ohio 43215
Why you want to go: This will be the go-to college party for Halloween. See if your costume has what it takes to go home with the grand prize.

October 26 Pins Mechanical Co., 141 N. 4th St., Columbus, Ohio 43215
Why you want to go: Not only do you get to carve your very own pumpkin, but if you come in costume you get a free round of bowling.

October 28 Inked and Screened, 4720 North High Street, Columbus, Ohio 43214
Why you want to go: There’s cool stuff for both kids and adults. Screen print your own coloring book, laser engrave your name on a custom wooden magnet, or, if you’re an adult, get some ink done by Riot Ink Custom Tattoo.

October 25 The Big Room Bar, 1036 S Front St, Columbus, Ohio 43206
Why you want to go: Dig on swing music? Ever wanted to learn how to dance? Come in costume and get the low down on the whole swingin’ craze.

October 27-29 Spacebar, 2590 N High St, Columbus, Ohio 43202
Why you want to go: You get to see your favorite local bands dressed as famous acts while performing covers of their music. We’re talking Nine Inch Nails, Brand New, NOFX, and The Rolling Stones.

October 27 Park Street Tavern, 501 Park Street, Columbus, Ohio 43215
Why you want to go: You’ll get to hear all those 90s classic rock acts played by costumed performers. It’s not every day you get to see Lenny Kravitz, Alannis Morissette, Pearl Jam, Depeche Mode, and Oasis all share one crowded stage.