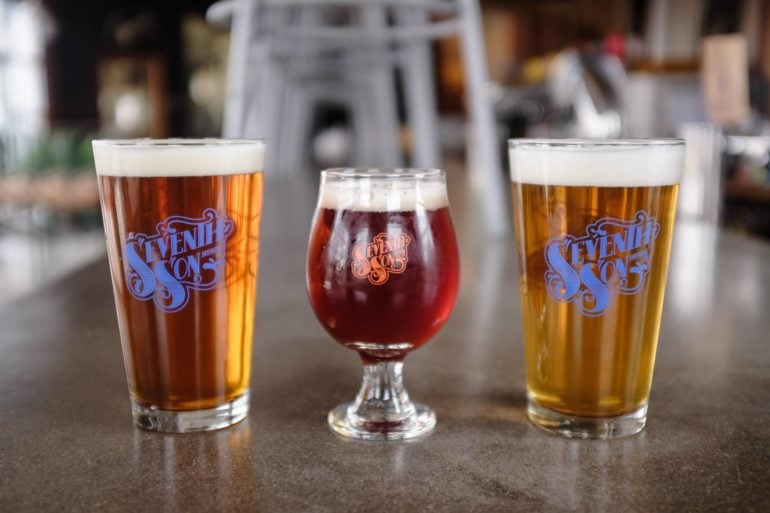 Alright Columbus, we get it, you like IPAs. You just have to have your friggin IPAs and your stupid layered hops. So after getting yelled at by my friends, family, and generally harassed by the majority of the city, it appears I’ve actually found some local IPAs that I like. I guess. So after a torturous amount of testing and exactly 38 sticks of gum later, I can present to you guys 10 local IPAs that I can actually get behind. And wipe that stupid grin off your face, I just admitted they were good, don’t rub it in.

Despite the hoppiness, the malts come through strong, bringing citrusy notes along with it. Also, if you’re one of those people who are unimaginably obsessed with locally sourced whatnots, you’ll love the fact that this brew is made with locally grown hops in Franklin and Pickaway County.

This beer wants to borrow your car and it has no plans on giving it back. It spent 3 years in juvie and bench presses cinderblocks in the garage whenever it’s not bumming smokes from the kids down the street. That’s right. This beer is totally your cousin Ricky. And even though it still owes you good money from that dog breeding business that never got off the ground, you love the son of a gun anyway. So cheers to all the Ricky’s out there in the world.

Not only is this beer pretty good, it also has a pretty cool history behind it. The brewery is located up in Westerville, the seat of prohibition, and in 1875 the town had a pretty radicalized temperance movement. By radicalized, of course, I pretty much mean psychotic. So much so that bar owner, Henry Corbin, greeted an angry mob in front of his bar with two pistols in each hand. Straight up gangster. Pretty cool right? I should mention though, they totally blew up the entire bar with dynamite. Twice.

At first, the idea of a constantly evolving IPA with each batch slightly different from the last kinda threw me off. A pretty weird concept but one that seems to be working. The concept itself keeps the avid beer fan on their toes and excited to try the next batch. At 7 percent alcohol by volume though, you should make sure you’re experimenting safely with this one.

This is the one that everyone kept friggin telling me to try. I’d get these dubious looks every time I told someone I just couldn’t dig on IPAs and they’d go “Yeah, but did you try the Bodhi?” I gotta admit though, it is pretty good. This bad boy weighs in at 8.5 ABV though. Is it just me, or were these things specifically designed to get you as messed up as physically possible real quick.

Oh my god, how adorable is this label?! With the dancing lady and the confused looking yak thing. Wait, is that a yak? Guys, I’m not going to lie, I’m not entirely sure what that thing is but I’m in love with this label and the beer is pretty good too. I haven’t had a lot of winter IPAs but if they taste like this, keep ’em coming.

I’m not gonna lie to you guys, this one’s a little intense for me. Nevertheless, it’s still pretty good. A triple hopped IPA that smacks you with the bitter buds and doesn’t apologize for it, this is gonna be a favorite of any IPA fan.

A beer appropriately named, the initial flavor knocks you on your back. Though initially strong, the finish doesn’t overpower you, making it a lot easier to down in rapid succession than most IPAs. The Stiff Arm is gonna have you striking that Heisman pose at the party all night. Yeah, you’re gonna be that guy.

Even I have to admit that this one is dang delicious. Citrusy, malty, and layered, this one kept me eager for the next sip. See? This is what I’m saying. Complexity in beers is awesome. Just because you’re an IPA doesn’t mean you can’t have dimensions. Some IPAs are so basic they’re practically wearing a pair of Uggs.

Both bitter and sweet, this beer is the perfect balance of both worlds. Mirror Lake is proof that you can have your cake and eat it too, which has always really confused me. Who’s gonna get cake and not eat it? It sounds mildly tortuous and strangely dark now that I think about it.

Well, look at me, trying new things and whatnot. I bet you’re pretty proud of yourself Columbus. Pulling one over on ‘ol Zoey and making him drink some IPAs. I think we’ve all learned a thing or two here. You guys learned that there are some pretty dope beers out there outside the wheelhouse of IPAs, and I’ve learned that most IPAs still taste like someone doused a perfectly good steak fillet with way too much hops flavored Frank’s Red Hot. Hah! That’s right! Did you think I’d buckle that easily?! You fools! I will not be swayed by your cult-like obedience to your bitter holy flower. With your ridiculous Doubles or Imperials or whatever the third Pokemon evolution of an IPA is. Now if you’ll all excuse me, I do believe I have some stouts to indulge in. *Skateboards away in a tophat* Cheerio!