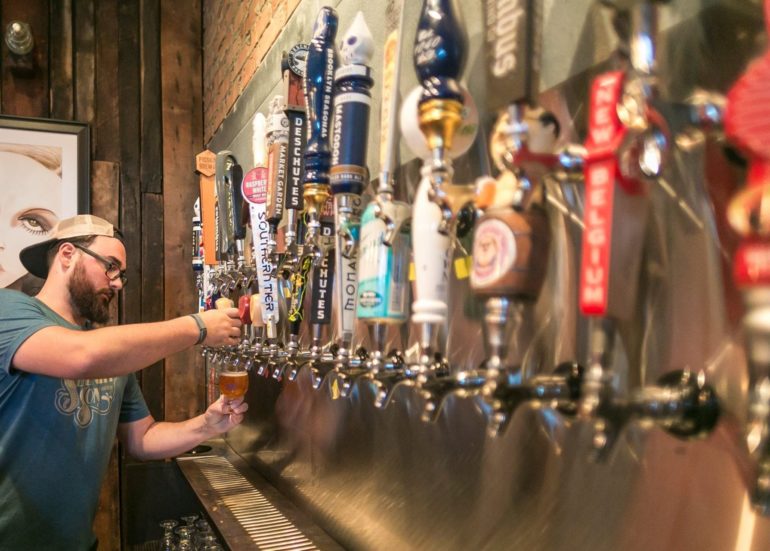 Sure, there’s a lot of good beer out there, but then there’s the beer that’s better than good.

There are a lot of things I love about you Columbus. You’re a relatively clean city and you don’t give me any gruff when I roll up my jeans in the summer, and for that I thank you. But my favorite thing by far are your pubs and microbrews. I mean, yeah your people are cool and your architecture is blah, blah, blah. Look, call me vain and shallow if you need to, people are people, but a good stout can get you through the apocalypse (or as I like to call it “election season”), you just got to sip long and deep and believe.

The fact of the matter is you have some really cool breweries, Columbus. All of their beers are pretty stellar, but each brewery has one that stands out a little bit from the rest. Each one has that super star draft or that cold brew that makes you wanna swear and swoon all at the same time. So drink deep Columbus, here’s a list of must try beers from each local brewery. Next time you’re out and about, staring dumbfounded at a jungle of tap handles, you’ll have a pretty good idea of what you’ll want to try first.

You got to love a beer that delivers on tasting like an elephant. It comes on coarse and thick, with dark and full bodied flavors. Don’t let the elephant gimmick scare you away from trying this one, it’s a pretty friendly tasting pachyderm.
Where:  655 N James Rd, Columbus, OH 43219

This one was pretty tough. Wolf’s Ridge puts out a lot of amazing beers including their Day Break, which stands out quite a bit considering it’s a Cream Ale. But the Driftwood breaks apart from the pack by leaps and bounds. It uses a layered flavor of wheat and hops to generate a taste that just keeps going long after the first sip.
Where:  215 N 4th St, Columbus, OH 43215

If you’re one that enjoys IPAs (I’ve got my own opinions on the subject) Elevator’s Three Frog is the triple hopped punch you’ve been dreaming of. But it isn’t your normal meat head IPA, it offers quite a bit of complexity in addition to its lip smacking flavor.
Where: 161 N High St, Columbus, OH 43215

A lot of people keep a negative opinion of wheat beers, some of it not unfounded. They have a tendency to sit idly by as potential flavors simply whiz right by them. Not with the Glory though, you get a crisp drinkability you’d normally find in your wheat beer, capped off wonderfully with a refreshing, hoppy, finish. The Columbus Crew colors on the can look none too shabby either.
Where:  424 W Town St, Columbus, OH 43215

Don’t be misled by the name, the North high Wildcard doesn’t just drop you off in the middle of flavor country without a map to get back, it leads you there. It’s got a smooth, welcoming flavor that sits you down in flavored pastures nice and easy. But then, yeah, it totally leaves you there and wanting more.
Where: 1288 N High St, Columbus, OH 43201

Now, this is definitely a beer that hits like a Mack truck and makes no apologies about it. From start to finish the Undefeated makes its presence known, with plenty of citrusy hops in the middle to carry it the whole game. The wallop of flavor is enough to make anyone want to scream in the middle of an end zone and drop a hot victory dance.
Where:  81 Mill St #150, Columbus, OH 43230

This beer comes on crisp and frisky, with a whole mess of grapefruit-like hops for you to savor. The finish is crisp and decisive however, giving you a moment to reflect on how gnarly that last sip was. It’s a very satisfying beer for those who appreciate a dry but bountiful taste.
Where:  985 W 6th Ave, Columbus, OH 43212

Just about anyone can be a sucker for a blonde with this charming stout by Lineage Brewing. We’re talking notes of coffee, vanilla beans, and cocoa, all tangled in smooth, frothy, roasted wonderful goodness. This beer has a lot of subtle complexities wrapped in a creamy nitro texture. The Obscura will have you humming ‘yums’ under your breath the whole time you drink it.
Where:  2971 N High St, Columbus, OH 43202

The Bodhi might be the IPA of IPAs here in the Capital City. So great is this titan of hop flavor that it won the bronze medal for an American Style IPA in the 2014 Great American Beer Festival. Bodhi comes across as well balanced and smooth for an IPA. But that doesn’t mean it doesn’t also have a load of flavor just waiting to be tapped into. It expresses its power fluently, deciding at the last minute to reign it in for approachability.
Where:  2555 Harrison Rd, Columbus, OH 43204

A heavily citrus IPA, this Knotty Pine beer plunges you deep into the memory of Mirror Lake. The pour is golden amber with plenty of foam head if done correctly. The malt aroma backs the play of the hops, giving it the crisp IPA flavor that you want with plenty of body to go with it.
Where:  1765 W 3rd Ave, Columbus, OH 43212

It’s always nice to see a brown ale make a list like this. The originally English style of beer tends to fly pretty far under the radar, with many pubs and breweries neglecting to make or even serve them. The Stone Fort argues a hard case against that, with deep, smokey tones of oat and chocolate. It gives the drinker a very earthy, very satisfying look at one of the most underrepresented beers out there.
Where:  1101 N 4th St, Columbus, OH 43201

This hilariously titled stout is 100% pure yum in your mouth. It’s got a hearty and deep flavor, sweetened with milk sugars and coated with toasted oat. You don’t just experience it in one sip, you keep tasting it long after the last little drop. This beer definitely has a very pleasant (dare I say the word) mouthfeel.
Where:  850 N 4th St, Columbus, OH 43215

This German wheat brew muscles its way onto the list with a distinctive and pungent banana flavor, layered over a crisp and clean wheat finish. The flavor overrides any of the stereotypically bland flavors you get from a hefeweizen without overdoing it. Not only is it distinctly well balanced but also highly drinkable.
Where:  80 W Church St #101, Pickerington, OH 43147

This thick, malty stout makes its presence known even before the first sip, spouting rich, earthy aromas that waft effortlessly from the glass. It’s a dark and bold stout that dares you to indulge in every taste. It’s carried by thick, smokey, malts, and an incredibly satisfying texture that only adds to the body.
Where:  41 N State St, Westerville, OH 43081

A subtle but dark orangish flavor gives quite a bit of personality to this wheat beer. The Blood Thirst Wheat incorporates Bavarian wheat yeast and Sicilian blood thirst zest to give it its spiciness and depth of flavor. Incredibly balanced with a hint of sweetness, this dark amber brew carries a light body that is sure to be welcomed by any palate.
Where:  467 N High St, Columbus, OH 43215

The Most Unique Houses In Ohio

Did I Find The Best Pizza In Columbus?

Blackhand Gorge State Nature Preserve Is An Amazing, Ancient Place Worth A Visit

Where To Have A Perfect Picnic In Columbus