Stadium Is Serving Up Good Food And Good Times, With A Side Of Sports

Farmers Markets, Restaurants, And CSAs Are The Grocery Store Alternative You’ve Been Searching For

COVID-19 has a lot of us reaching for food that tastes good, calories are damned. If the world is falling apart, the least we can do is enjoy what goes into our bodies, right?

When I saw that STADIUM Columbus was started by the same person who started Superchefs, I had to take a gander. Before the pandemic, Superchef’s breakfast had always been one of my go-to morning places when I craved red velvet pancakes and an unapologetically black atmosphere.

STADIUM owner Darnell Fergurson is no longer affiliated with Superchefs, but he did start them. The seasoned, black chef has had much success — first with starting the several Superchefs locations in Louisville, then later reopening and expanding in downtown Columbus and Gahanna after the Louisville location burned down. After he relinquished control of the Superchefs restaurants, Fergurson went on to appear in several Food Network challenges, even winning Guy Fieri’s “Tournament of Champions” this year.

https://www.instagram.com/p/CD6NRvKBzOJ/
STADIUM is located in the Creekside part of Gahanna, at 101 Mill Street. Inside, the restaurant is adorned with stylish graffiti-style artwork on many of the walls, several pinball or cabinet-style video games, surrounding a large bar that has seating for many. Several walls are adorned with the restaurant’s S-shaped logo. The place’s theme skews more towards the sports bar part of the spectrum — and this is intentional.

As Fergurson told Columbus Alive this year Stadium is “a sports bar for foodies.” An entire side of the bar opens out to the Creekside plaza, and it adds ambiance to the whole restaurant, even if you’re not sitting outside on the patio.

STADIUM also appeared to be taking COVID-19 seriously — each table was pretty far apart from the next, and all of the staff were wearing masks and pretty diligent about wiping and sanitizing. Also, an entire side of the restaurant was open, no doubt aiding airflow.

The Menu itself is sports-themed, with each “quarter” being a different type of meal, and many of the dishes and drinks being references to some sort of sports theme. Even if you’re like me, and never played sports in High School or college, you’ll still probably get a kick out of some of the names.

I brought a friend with me to give a bit more variety of food. Also, usually, I can’t finish all the food if I go by myself. 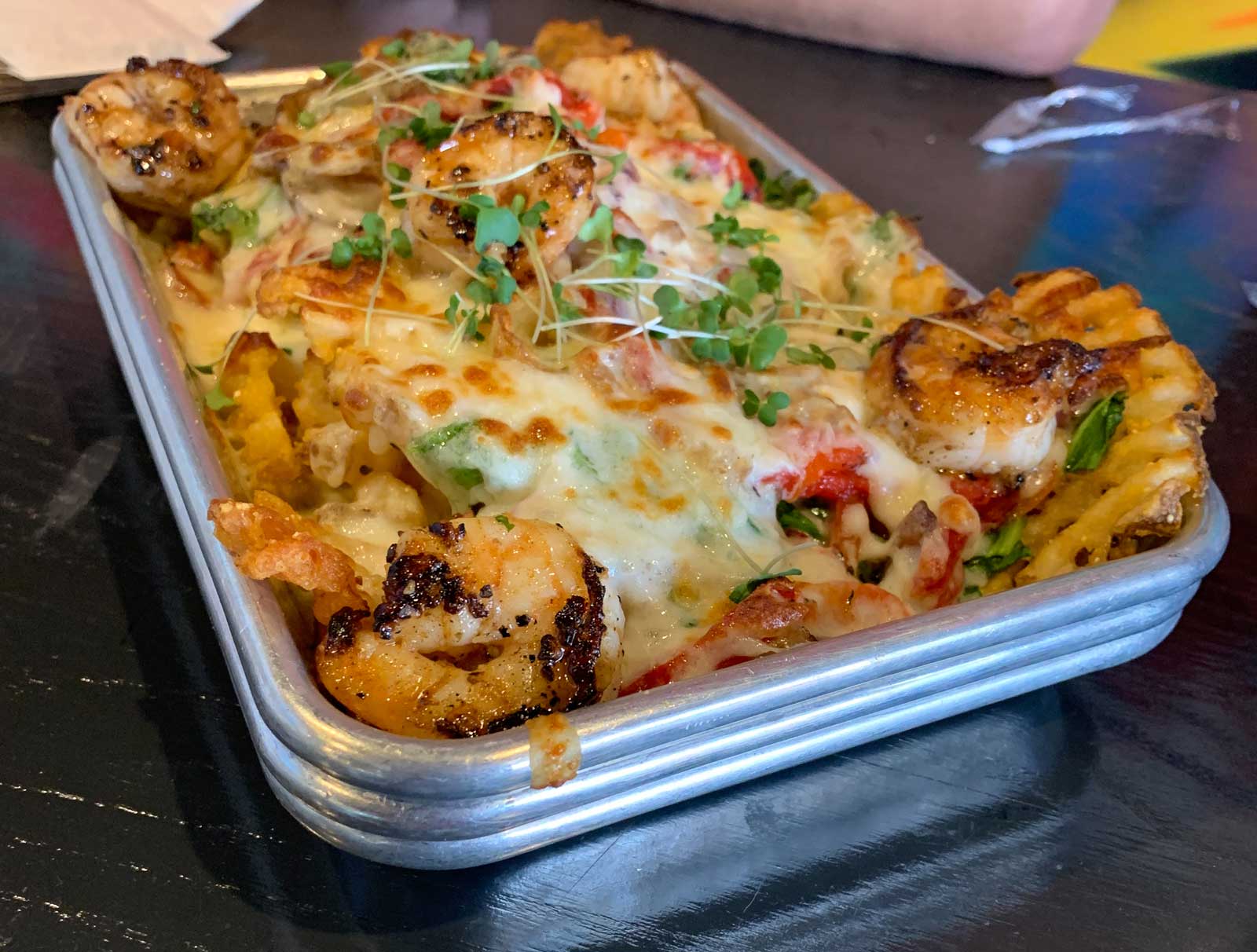 To start, we got the Creekside Fries ($10) — which are waffle fries, topped with shrimp, alfredo sauce, caramelized onions, spinach, and roasted red peppers.

“Well, those shrimp DEFINITELY are not frozen”, said my friend, as the waitress brought our appetizer to the table.

The shrimp are plump and juicy — and had just the right amount of char and seasoning from the grill they were cooked on. Also, there was a generous amount of food as well. The whole dish was well seasoned, with the waffle fries unique blend of crispness with a fluffy inside — a real treat. The slight sweetness from the roasted red pepper is a great compliment to the creamy and salty alfredo sauce.

For our entrees, I ordered the Hometown Hero ($15) — a burger topped with Collard Greens, Mac n Cheese, and sweet potato spread. My friend ordered the NBA Jam ($13), also a burger, topped with a Garlic Aioli, Smoked Gouda, Arugula, and a Bacon Jam.

Yet, it was still delicious. Mac n Cheese, collard greens, and sweet potatoes are such a quintessential black family cookout combination, that tasting it on a burger felt incredibly familiar. The combination works; the mac n cheese is creamy and perfectly done — and compliments the burger’s flavor, from its marinade. The bun is soft with the perfect amount of give — holding the burger together without being in the way or being overly heavy.

The NBA Jam was similar — my friend enjoyed his burger, praising the flavor of the meat, as well as the slight sweetness from the bacon jam that paired well against the sharpness of the gouda cheese.

Both burgers come with a side of the seasoned fries — and like in the appetizer, they’re just as good by themselves without any of the extras.

My friend and I talked a bit about what we had tasted. We agreed that it was nice to see a menu that was so thoroughly considered; the dishes we had had so much consideration as to what would work together. Even the plates they served us on were cute and added to the experience.

With the food we tasted, I do not doubt that the rest of the menu is just as flavorful and well seasoned.

I have plans on coming back and trying other dishes on the menu.

Kevin Williams is a freelance writer and a northeast Ohio native.

View all posts by Kevin Williams