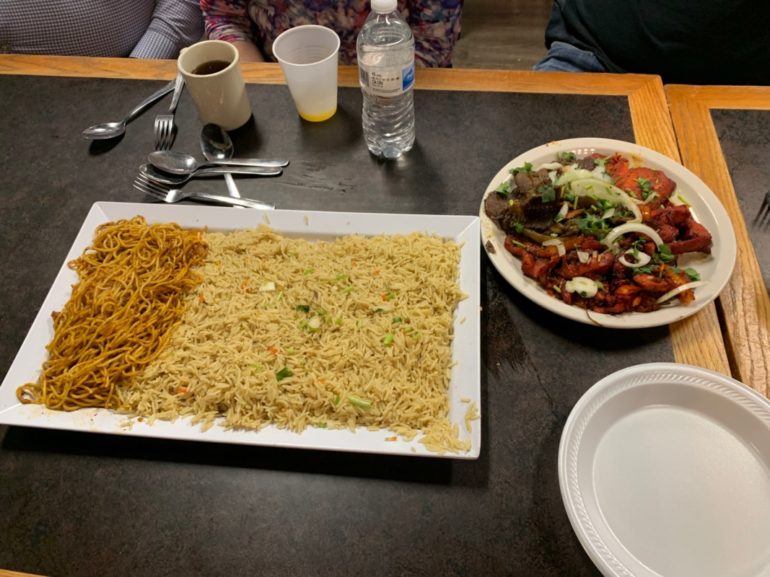 African Paradise Restaurant was the perfect cultural experience to step out of our comfort zone in our own home town.

Columbus has the second largest Somali population in the United States, yet I’ve lived in Columbus my entire life and had never been to a Somali restaurant. But I knew that had to change. In my desire to try something new, I enlisted my whole family for a food adventure and headed to African Paradise Restaurant. Let me tell you, it was quite the trip.

Like so many hidden gems, from the outside this authentic Somali restaurant really doesn’t look like much. Inside is something way more interesting. When you first walk in you’ll notice there are red walls inside dividing the room into sections. I’m not going to lie, this was a bit of a culture shock. There’s a section for just men and a section for women and families, which is where we were sat. It’s traditional in Somali culture for there to be a men’s “get-together” section in a restaurant. 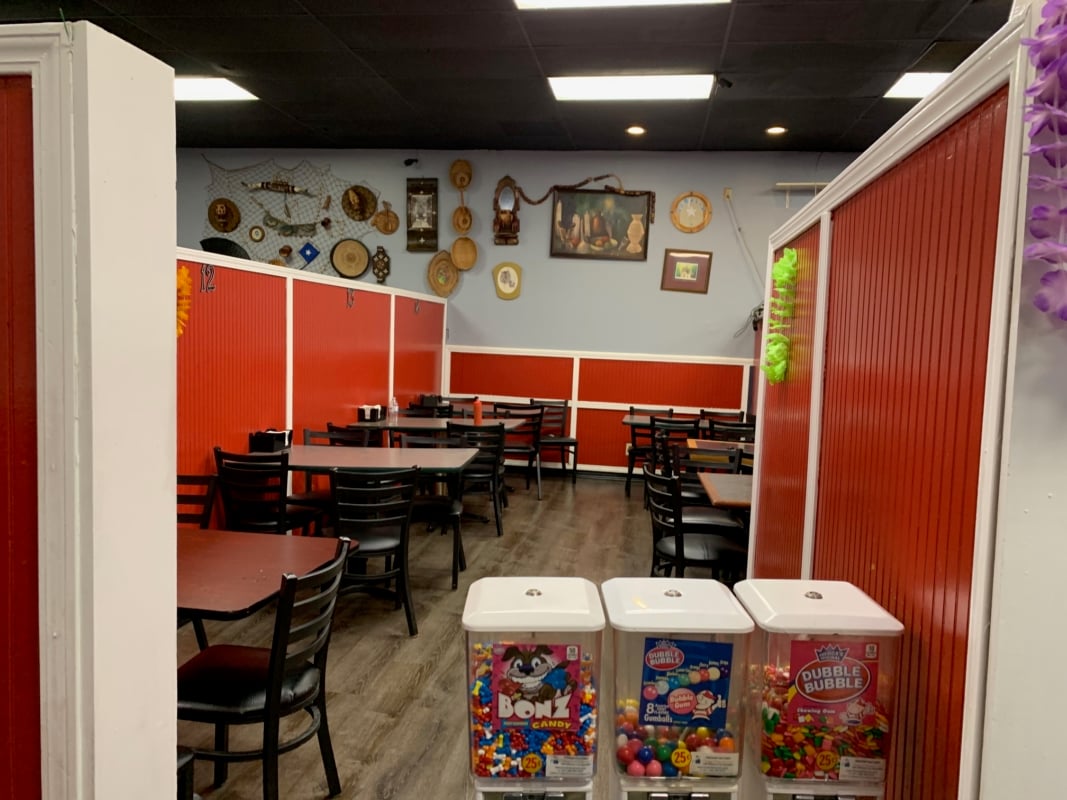 We were offered Somali tea and mango juice when we sat down and we said yes to both. I went into this to try something new so we pretty much said yes to everything.

This tea is not just any tea. When the waiter offered it to us he said “Somali sweet tea”, and he really meant sweet tea. I like Southern sweet tea so I thought “cool, this will be like that but hot.” No.

What came out was a complex blend of spices and sweetness in a hot black tea. It was like nothing I’d ever tasted before. There were mixed reviews around my table. I liked the flavors but it was a little intense for me to drink a whole cup. My stepdad, on the other hand, thought it was great and finished his. “I can really feel the spices,” my mom said. She was right. You really could feel it as you were drinking it.

My sister preferred the mango juice. Which was also delicious, and also quite sweet. 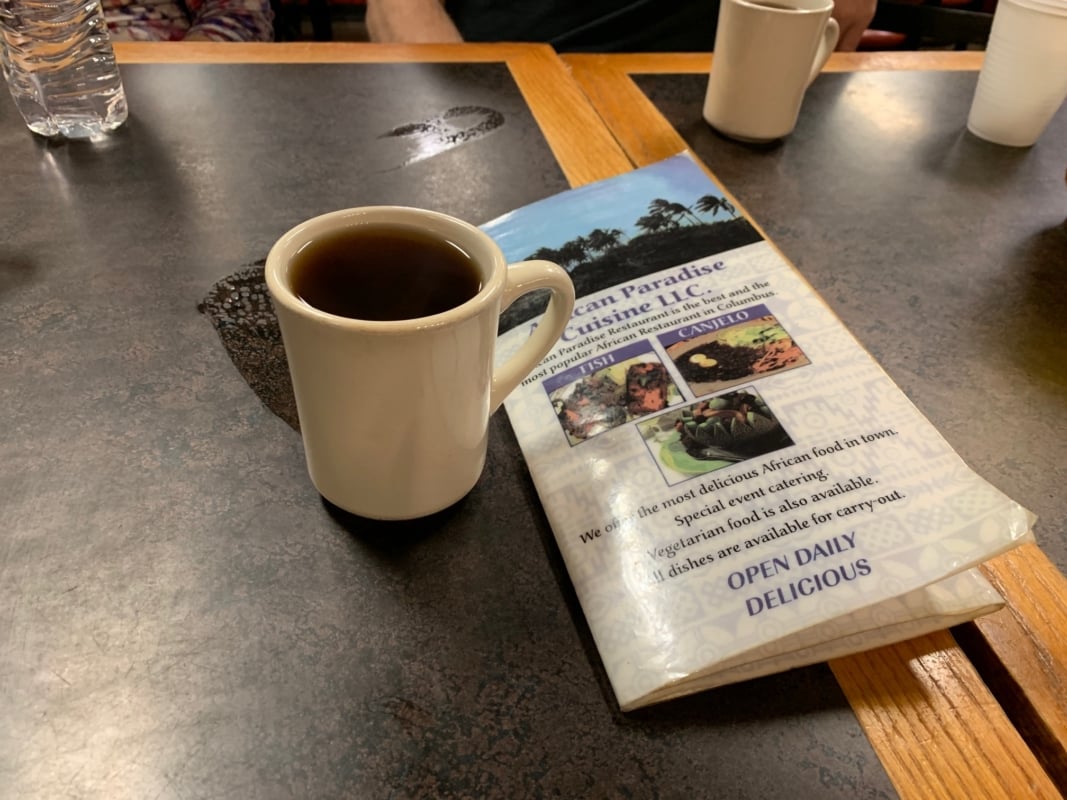 We were ignorant when it came to looking at the menu so we asked what they would recommend. He said the chicken steak, the beef steak, and the fish. These dishes come with rice or spaghetti or both. Yeah, both the menu and the waiter really said spaghetti. I really didn’t know what to expect there, but again, we said yes. Turns out, it’s spaghetti noodles with a spice blend. I wish I had more details to offer you besides “spice blend” but I wouldn’t know where to begin. All that matters is that it was super yummy! 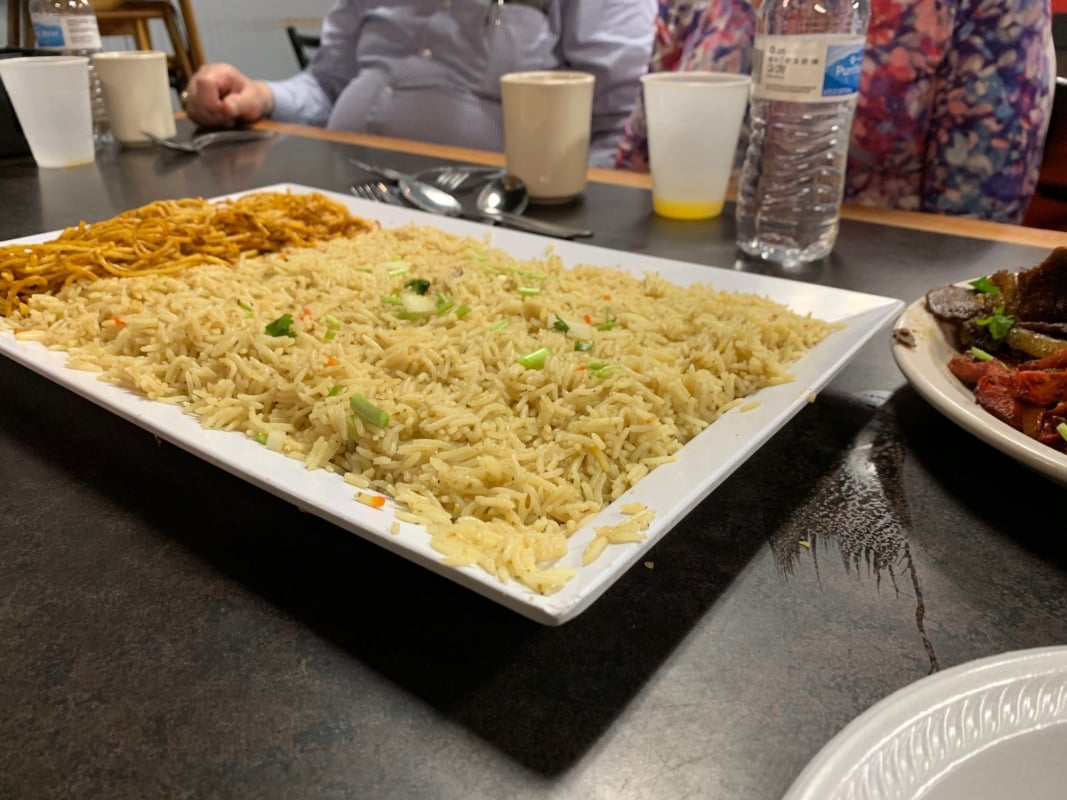 The wait for our food wasn’t long at all and before we knew it, out came a massive plate of rice and spaghetti. The proteins came on a separate plate with onions and peppers. It was served family-style, so we asked for plates assuming they just forgot to give them to us. That was before we saw other people just enjoying it with their hands as it was clearly meant to be eaten. The waiter had been prepared for our confusion because he had given us forks and spoons, which the others did not have.

My 8-year-old sister thought the rice was fantastic, and it was really good. The chicken was my favorite though, mostly because it was flavored in a way I had never tasted before. The lack of knives made it a little challenging, but we were there to experience something new so we didn’t ask.

The fish was flavored similarly to the chicken so I enjoyed that too. The beef was different and really flavorful, but it was all really mild. I came in with some preconceived notions that all African food was going to be hot but I was wrong. It was all quite mild. This was different than the Ethiopian food I had tried before and now I’d definitely like to try food from other regions in Africa to see how they all differ.

I will say that the vegetarian options are a little limited. They had a beans option but we opted for the fish since my mom isn’t a full vegetarian. 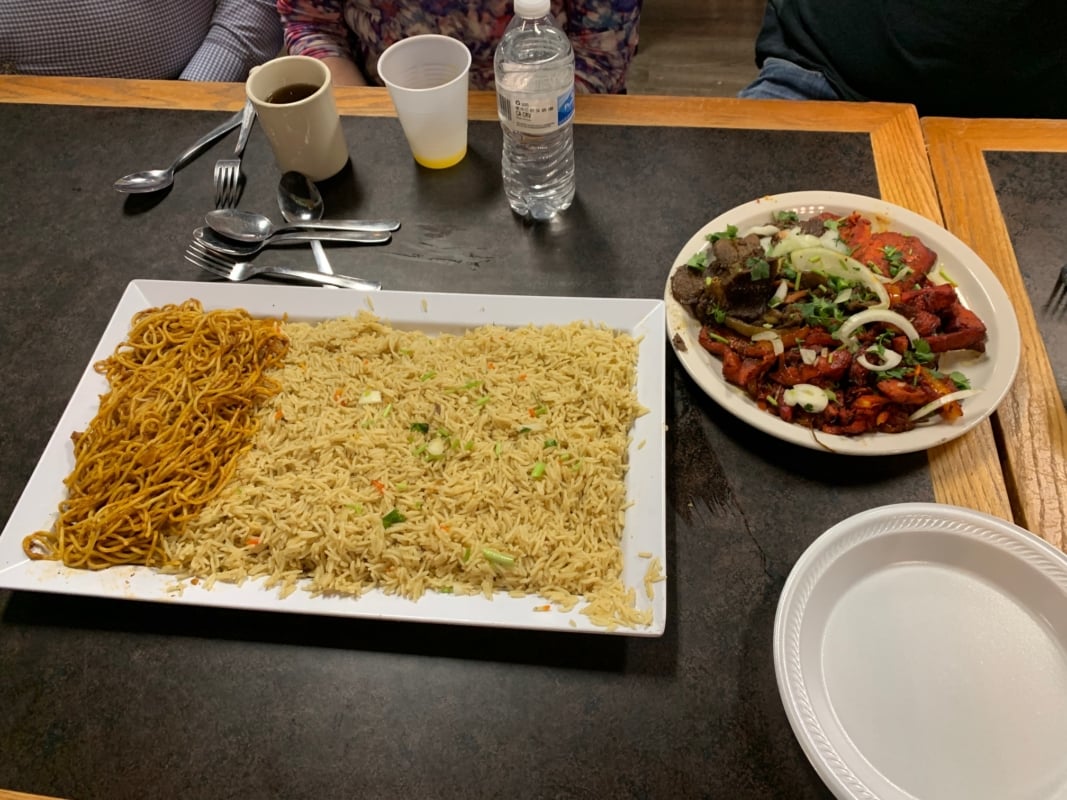 One of the best things about was this meal was that it was super cheap! We fed all six of us for under $10 per person, including tip. Totally insane.

Trying something new is always an enjoyable experience, whether it becomes your new favorite cuisine or not. I had a lot of my perceptions shattered when I tried this place and I look forward to doing it again. Columbus has an incredibly diverse food scene when you really start looking. It’s more than just tacos, burgers, and brunch and I’ve barely dipped my toes in. I wonder what I’ll try next… I’m thinking maybe Tibetan or Salvadoran. Any suggestions?