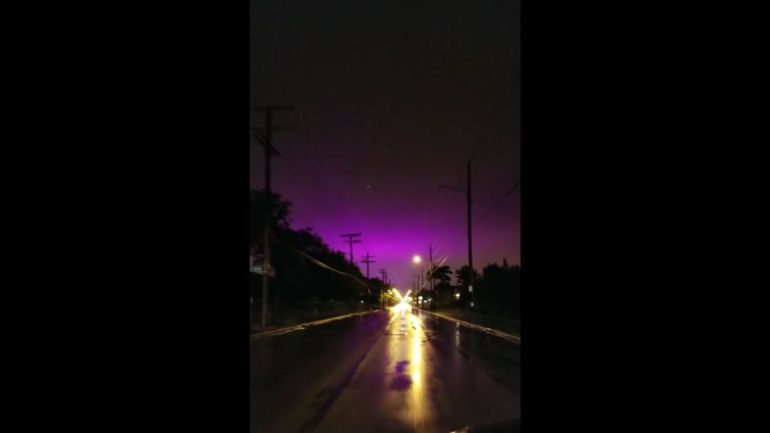 What Caused This Eerie Purple Sky Over Northern Ohio ?

Last week, a strange but beautiful phenomenon was captured over northern Ohio.

As he was driving near Cleveland, Jbreez216 noticed that the sky had turned a vibrant purple. It was so eerie and jarring that he even held his phone out the window just so viewers could be sure there wasn’t a strange filter on his windshield.

“Look at the sky, why is it purple like that?” he says in the video. “That’s crazy. I thought it was my [window] tint for a second but… that’s out the window. That’s crazy.”

And it is totally crazy, right? There’s no way there’s a rational weather explanation for something like that.

While the purple sky may have been eerie or ominous at the moment, it turns out it’s nothing sinister. Let’s channel our inner Mark Watney and “science the shit out of this” for a moment.

The color of the sky is determined by the way particles interact with our atmosphere. For instance, we see the sky as blue because of the way the light from the sun interacts with the nitrogen in our atmosphere. But light is scattered when it reaches earth, and the way it scatters can change the way we see it.

In fact, according to astrophysicist Brian Koberlein, the sky is actually always a bluish violet, but because of scattering and the way the human eye works, we perceive it as a pale blue. If you really want to go down a rabbit hole, you can read more about scattering here.

But long story short? A red sunset combined with the last scattered blue light of the day causes us to see a violet sky. And that’s what we are seeing in the video aboev.