Life As We Know It: Here’s What It’s Like Being An Inmate In Ohio During A Pandemic

By Piet van Lier
The COVID-19 pandemic has shown that every Ohioan – whether they live at home or are being held behind bars – must be protected and cared for. Not only is it the right thing to do, it’s the best way to keep everyone safe.

Take A Peek At Lower.com Field Before The Crew’s First Match This Weekend

Policy Matters Ohio released a statement two weeks ago urging state officials to include incarcerated Ohioans in their response to COVID-19. Not long after that, I received a letter from a man being held in a state prison.

We verified that this person – whose identity we are protecting at his request – is incarcerated at North Central Correctional Institute in Marion. We have not been able to confirm other details, such as his health condition and the condition of his father-in-law.

In his press conference today, Gov. Mike DeWine indicated he would issue a new order for the prison system. It is critical that the order quickly begin to reduce the number of people being held in Ohio prisons, both to keep them safe and to open up space to help protect those who remain incarcerated.

Last week, Policy Matters joined the ACLU of Ohio and other groups to urge Gov. DeWine to immediately order the reduction of state and local incarcerated populations, noting specific legal methods that could be used. We called for the safe reduction of Ohio’s incarcerated population focused on releasing those with a lower risk of recidivism and those with a higher risk of infection.

We have edited the letter from North Central for clarity, but included an image of the original below. I called the Ohio Department of Rehabilitation and Corrections asking for comment, but did not hear back on time for our deadline.

To the Governor of Ohio:

My name is [redacted]. I am at North Central prison in Marion Ohio. I have like 4 months left. I have asthma. This virus that is going around can kill people like me. I have 2 kids and a wife and I know there are other guys in here that have not done things that bad that we all could be put on house arrest or probation for the remainder of our time. My father-in-law is dying because of this virus and that is not good. We are in groups of 210 could be more and we sleep next to one and other. We eat off the same plates and forks. All it will take is one of us to get this and the whole prison will have it. Like I said I only have 4 months left. I am just asking you to think about us and our well-being. If one person gits this then there will be hundreds to git it and may even die.

Thank you for your time

Please make your voice heard. Tell Gov. DeWine that protecting Ohio means keeping all of us safe – including those who are paying their debt to society in prison.

You can view the full letter below. 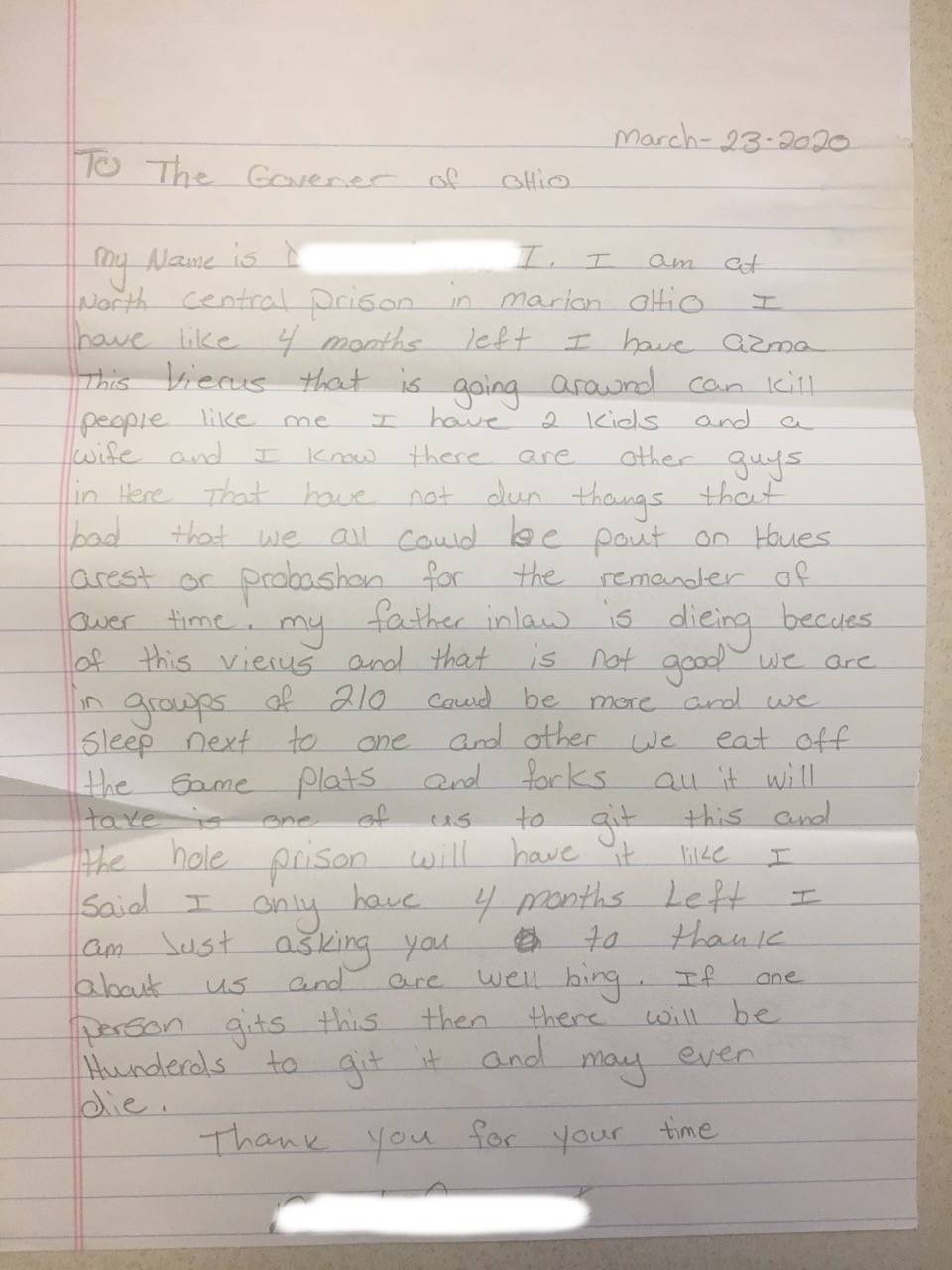 This story was originally published by Police Matters Ohio on March 31, 2020 under the headline, Voices of COVID-19: A letter from the inside.