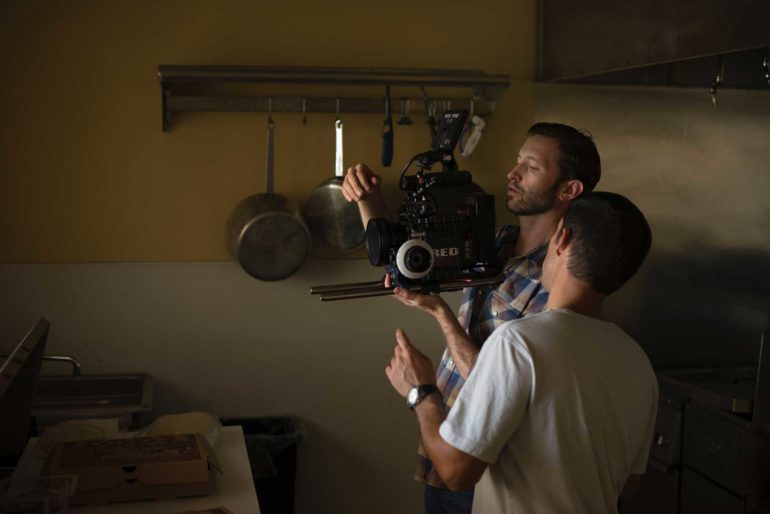 Does This Scene Look Familiar? A Look At Films Made In Ohio

Have you ever been watching a movie when all of a sudden, a familiar location pops up on the screen?

Ohio isn’t historically known for being a filmmaking hub, but it is becoming more and more common. But as tax credits increase, more and more production companies are seeing the allure of the Buckeye state.

Part of that draw is Ohio’s many landscapes. For crowded, city scenes, Cleveland, Columbus, and Cincinnati can stand in for the world’s largest metropolises. Just a short drive from any of them, you’ll find rural landscapes. It’s convenient, and with the tax credit, it’s becoming more affordable.

Ohio isn’t just about the locale. There are also creative people who want to build up the industry in Columbus, and the rest of the state.

“There’s just so many outlets now for original content, and that creates an opportunity for people in Columbus — people who want to come back to Columbus,” John Daugherty, executive director of Film Columbus, recently told The Dispatch. “There are some really talented people here.”

Of course, even before the financial incentives, Ohio had been the setting for many films. From Academy award-winning dramas to comedies and action flicks, here are just some of the movies that have filmed in the state.

Because it is, perhaps, the most iconic film ever made here in Ohio, I just had to start this list with The Shawshank Redemption. Nominated for 7 Academy Awards, the film was directed by Frank Darabont and brought an all-star cast, including Morgan Freeman and Tim Robbins, to film in Mansfield.

The Ohio Reformatory serves as Shawshank Prison, and nearly all principal photography took place there. Areas of the prison still remain exactly as they were for filming, including the Warden’s Office and Brooks’ hotel room.

This critically acclaimed coming-of-age drama may have been set at The Ohio State University, but most of the filming took place in Sandusky. The film focuses on adolescence, teenage angst, and explores the emotional aspects of coming out of the closet.

In addition to Sandusky, viewers also see Oberlin College (as it stands in for OSU) and world-renowned theme park, Cedar Point.

At this point, there’s just something so familiar about Harrison Ford being in a flying craft of some kind. In the opening scene of Air Force One, Cleveland stood in for Moscow and if you look closely, you’ll see Case Western University.

The Avengers was the first Marvel movie to film in Cleveland. Directed by Ohio natives, the Russo brothers, the film basically took the city over in the summer of 2011. Pretty cool. There are so many sites you can see while watching the movie, so check out this list, including timestamps.

Starring Nick Jonas and Ben Schnetzer, the film takes a dark look at university hazing rituals. The film wasn’t a box office hit, but it did earn positive critical reviews, earning a 77% on Rotten Tomatoes. Filming took place in Finneytown, Ohio, a small suburb north of Cincinnati in 2014.

If crime dramas are your cup of tea, then Traffic is definitely worth a watch. The explores the illegal drug trade through three storylines, all of which are interconnected but not showcased at the same time. Part of the story follows a Conservative, Ohio Judge, played by Michael Douglas.

In Traffic, several notable Columbus locations were used for filming including the Ohio Judicial Center and the Ohio Statehouse.

Standing in for Washington D.C., Cleveland hosted part of the filming for Capitan America: The Winter Soldier. The movie only shot from May-June in 2013, but it showcased several locations around the city.

The Federal Reserve Bank of Cleveland, the Cleveland Public Library, Cleveland State University, the Cleveland Arcade, and Tower City Center were all locations for the film, but the most notable was the Cleveland Museum of Art, which acted as the headquarters of S.H.I.E.L.D.

The Ides of March may have been partially filmed in that state up north, but most of the production took place in the Queen City. Cincinnati and the surrounding area served as a backdrop for this film, starring and directed by George Clooney.

Although initially the city was left off of the theatrical credits, that didn’t stop any Ohioans with a good eye from recognizing the familiar sites of Fountain Square, Over-the-Rhine, Mount Lookout, and Xavier University. Some filming also took place at Miami University in Oxford.

During the filming of Aftermath, I had an up-close look at the movie industry, since scenes from the Arnold Schwarzenegger film were shot just one street over from my house. The film tells the story of a distraught husband and father, looking for vengeance after an airplane accident claimes the lives of his wife and daughter.

Although this isn’t the first time Arnold has pushed filmmakers into exploring Central Ohio, it was the most recognizable. On the screen, viewers will see various parts of the city, including Merion Village and John Glen International Airport.

Here’s a not-so-fun fact: Jeffrey Dahmer, the notorious serial killer, went to high school right here in Ohio. That’s why it made the perfect setting for My Friend Dahmer, a film released last year.

Shot in Akron and Middleburg Heights, the movie follows Dahmer during his senior year of high school.

Perhaps one of the most iconic filming destinations, Cleveland subbed in for small-town Alabama in A Christmas Story. The house used as the home of Ralphie Parker and his family has become quite the tourist attraction in West Cleveland and is even available to rent for special occasions.

Other familiar sites in the film include the Higbee Department store building. That’s where the infamous Christmas slide scene takes place. Although Higbee’s kept the slide for a few years after the production, the store has since closed.

I Am Wrath was one of the few films that didn’t choose Columbus as a stand-in for another city, but rather filmed in the city the movie was actually set in. That being said, the film does depict Columbus in a much more negative light than residents probably prefer.

The film was primarily shot around Cincinnati but in the trailer, you’ll catch a glimpse of the Scioto River in downtown Columbus.

With film groups now operating in major cities around the state, Ohio is ramping up the effort to become a film and television destination. To learn more about filming in Ohio, including information on permits, procedures, incentives, and more, please visit the Ohio Film Office website.