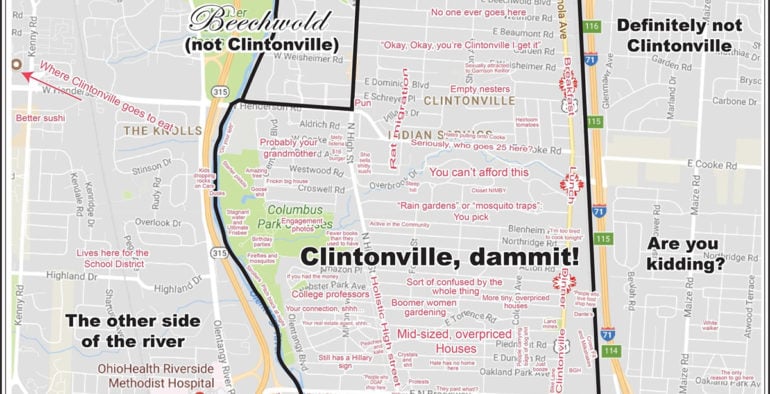 The Longer You Look At This Map Of Clintonville, The Funnier It Gets

Brad Hoehne, a man from Clintonville, created a map of his neighborhood and it’s downright hilarious.

If you’re from Clintonville, you’ve got to see it. It might drop a few truth bombs, but I think it’s pretty darn accurate.

Full disclosure, the map does contain a bit of adult language.

“The Authoritative Clintonville” by Brad Hoehne from Columbus

Hoehne’s map ended up on the Columbus Subreddit after Reddit user OldHob posted it, and everyone’s loving it.

I grew up in this neighborhood full of “feral cats,” “mini yard libraries,” and “luminaries.” The longer I look at the map, the more I crack up. Some of these labels are so accurate it’s uncanny. There are certain areas of the neighborhood that I never knew what to call, but now I know that the area is full of “druids”.

Mr. Brad Hoehne is a genius.

C’mon, Clintonvillians. We all know that we’ve said “They paid what?” about the homes on E. North Broadway, seen babyboomer women gardening, and thought, “that’s a frickin’ big house!” about the totally out of place mansion at the bottom of Croswell Road. How often are you one of the “people carrying bags of dog sh*t”?

Hoehne even addresses some neighborhood hot topics by labeling Indianola Avenue “Bike Lane” and this little tidbit I just had to take a screenshot of: