My husband and I found ourselves free on a Sunday afternoon, so we decided to check out the newest addition to Easton Town Center – Ivan Kane’s Forty Deuce.

This whimsical cafe and speakeasy is a welcome addition to the Columbus scene – there’s just nothing else like it.

Located at 3959 Brighton Rose Way, the space resembles an old warehouse from the outside. When I walked in, I felt like I was transported to New York City. It definitely gave off NYC diner vibes, with brightly colored tile, murals depicting the city and artwork featuring Manhattan’s 42nd Street. It also warmed my heart to see a few nods to Columbus and to the OSU Buckeyes scattered throughout. 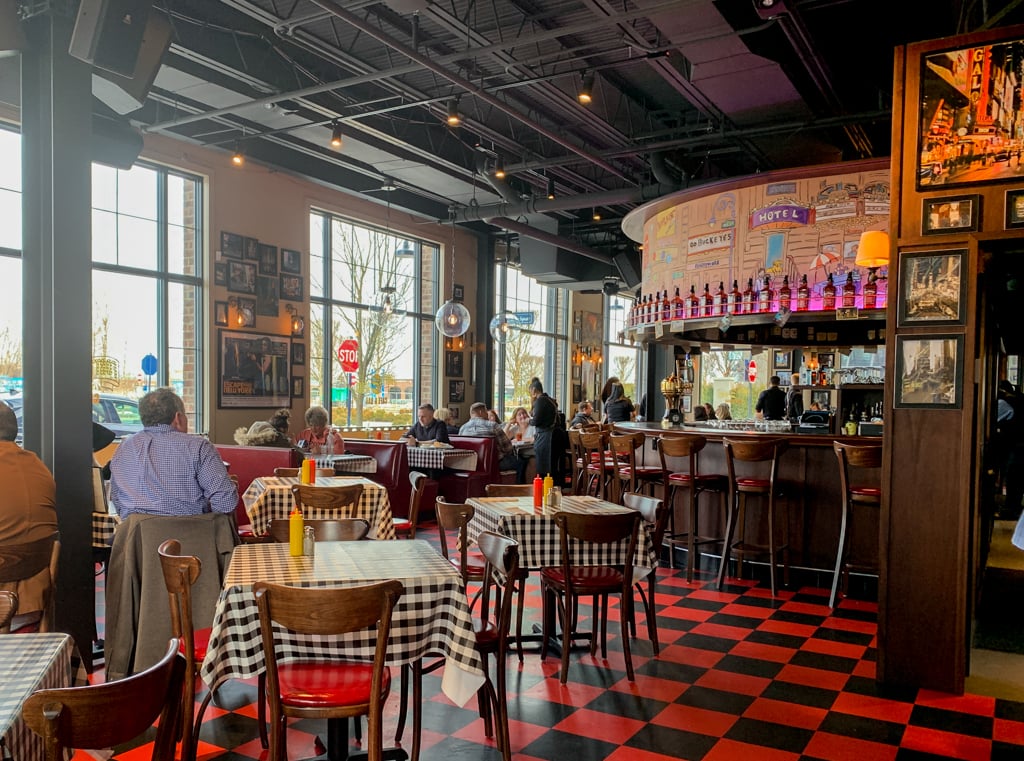 Ivan Kane, a native New Yorker, grew up hanging around Times Square, specifically 42nd street, with his friends. They used to refer to 42nd Street as “Forty Deuce” and when he opened the concept, he wanted to pay homage to his beloved town.

The cafe is open daily, from 11am-11pm Monday thru Wednesday, and stays open until 2:30am Thursday thru Sunday.

The cafe is first come – first served, so you’re unable to make any reservations.

We arrived for a late lunch, around 2pm, and I expected it to be pretty dead. I was pleasantly surprised to see that it was more than half full and the energy was buzzing. We were seated near a piano and I learned that they have live music on Friday and Saturday evenings.

Our server, Domenica, was awesome. She was super friendly and answered all of my questions with a smile.

There were lots of fun cocktails available, along with beer and wine. I loved seeing some local Columbus favorites like Wolf’s Ridge and CBC on tap. I also spied some Mad Moon cider and Brew Dog on their bottle list! 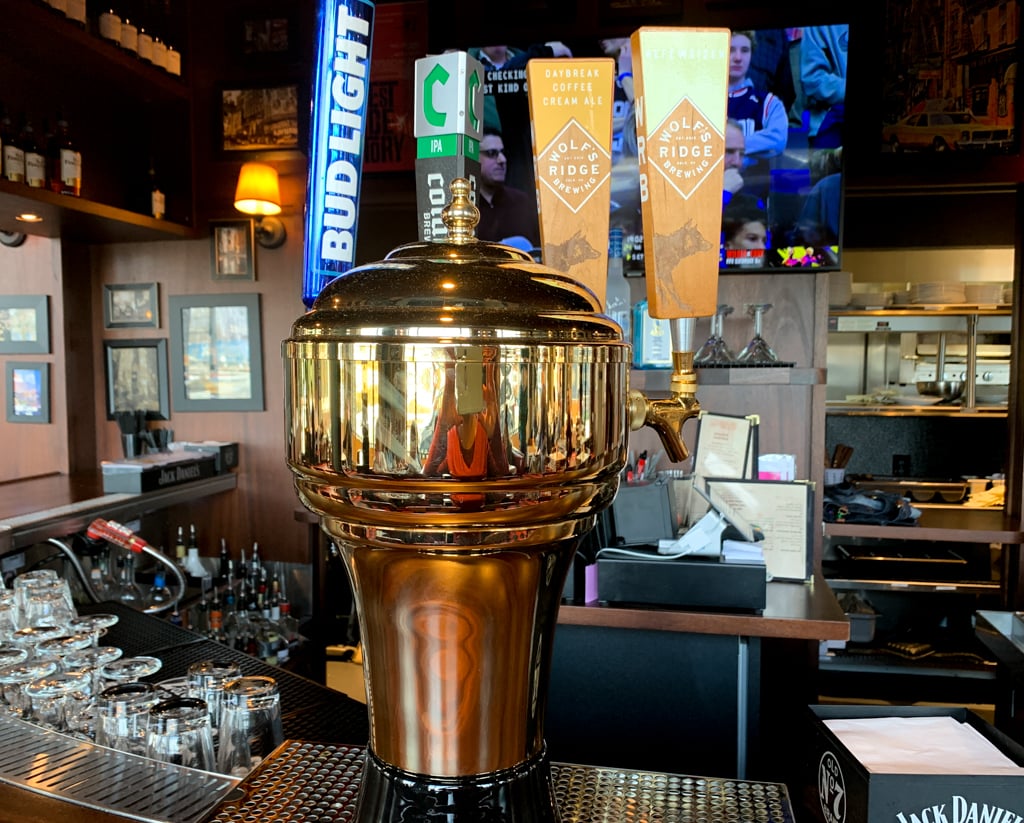 It was a little too early for a cocktail, but my husband loves CBC’s IPA so he opted to get one and I’ll be honest, I couldn’t stop laughing hysterically when he got carded. 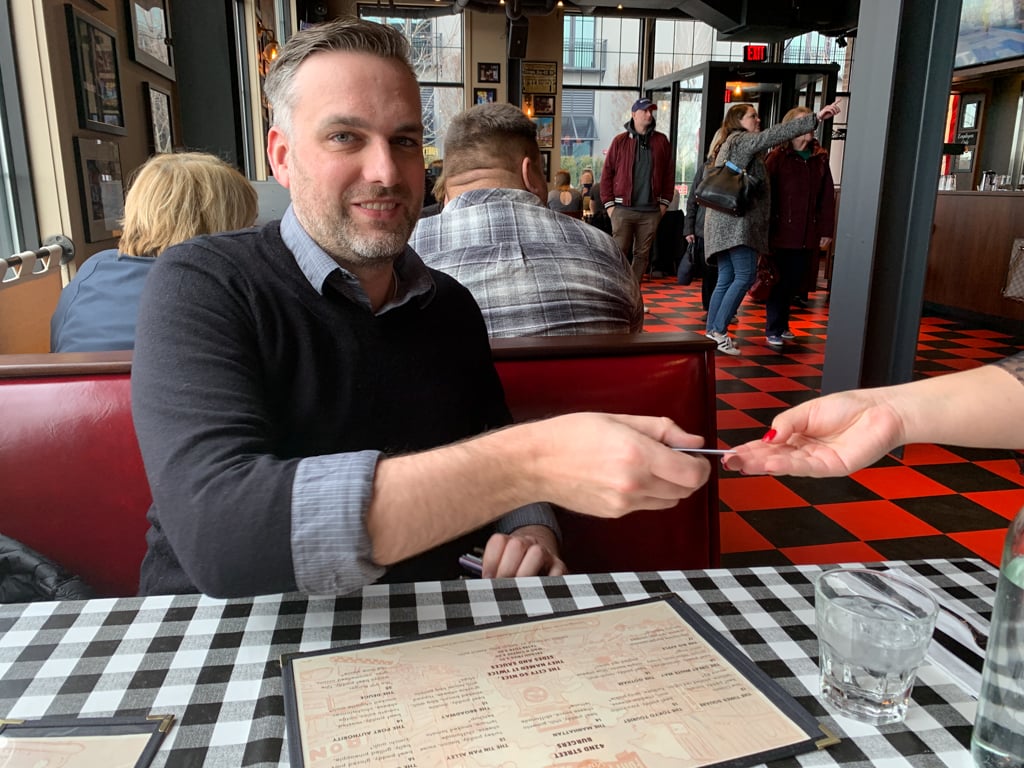 As we were looking over the menu, I saw Ivan Kane walk in!

Besides owning Forty Deuce, Ivan Kane is well known for his acting in movies like Platoon, Gettysburg, and Born on the 4th of July.

I was pretty excited when he stopped by to say hi because I was dying to ask him the question I always have to ask restauranteurs and chefs – “What’s your favorite dish on the menu?” 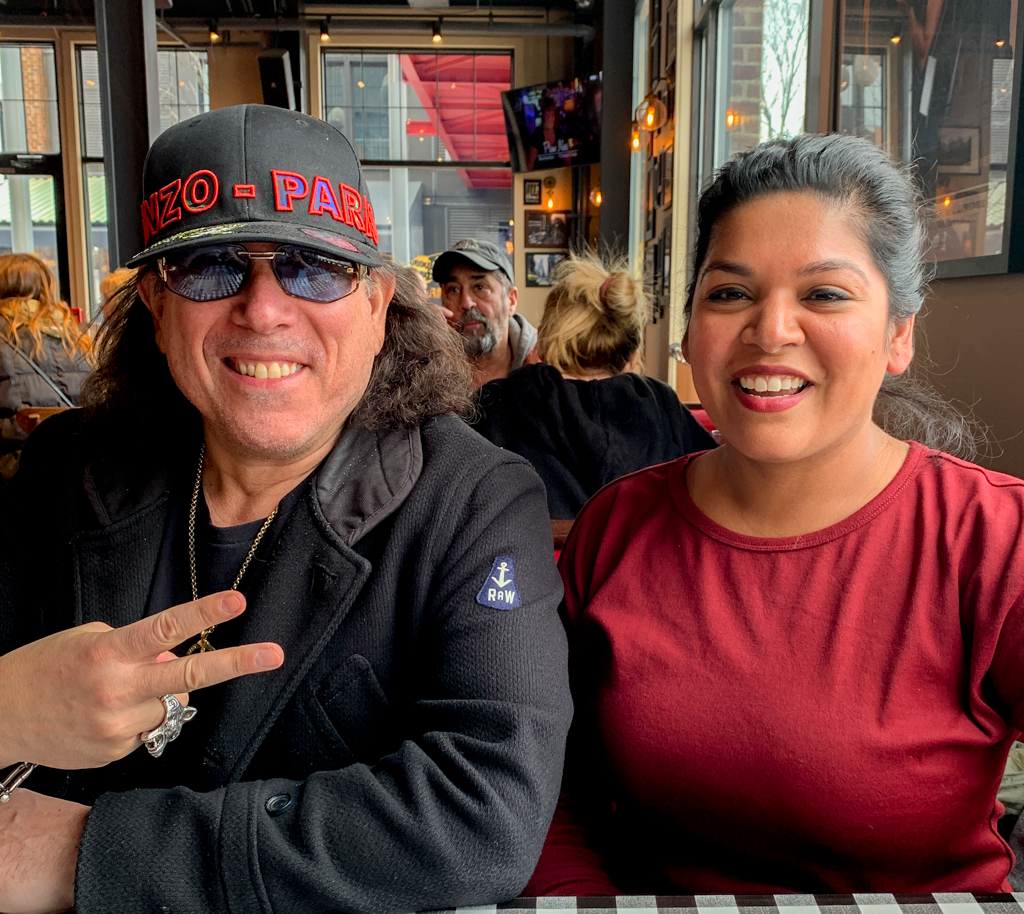 Ok, and I also asked him for a picture. I’m so #basic.

The menu is fairly small, and centers around burgers. The food was designed by award-winning chef, Neal Fraser, an Iron Chef who started his career as a line cook under Wolfgang Puck.

Burgers are served a la carte, and range in price from $13 (The Times Square – classic beef patty, tomato, lettuce, pickled red onion and sauce 42) to $35 (The Deuce – a VIP burger consisting of wagyu beef, foie gras, caramelized onion, and a red wine sauce.)

My husband and I had watched a few burgers come out and decided to split one as they are simply massive. Ok, and also because we wanted to save room for one of their epic milkshakes.

Ivan told me that his favorite burger was The Gotham – a beef patty with maple bacon, blue cheese, pickled red onion, and a ranch aioli sauce ($16) or The Checker Cab – a beef patty with glazed pork belly, grilled pineapple and a kimchi aioli ($16).

While both of those sounded amazing, we settled on the Tokyo Tourist – beef patty, cheddar cheese, spicy pickles, furikake and a yuzu kosho aioli ($15), mainly because we had no idea what “yuzu kosho” was. (Update: It’s a spicy fermented Japanese style chili paste with delightful notes of citrus.) 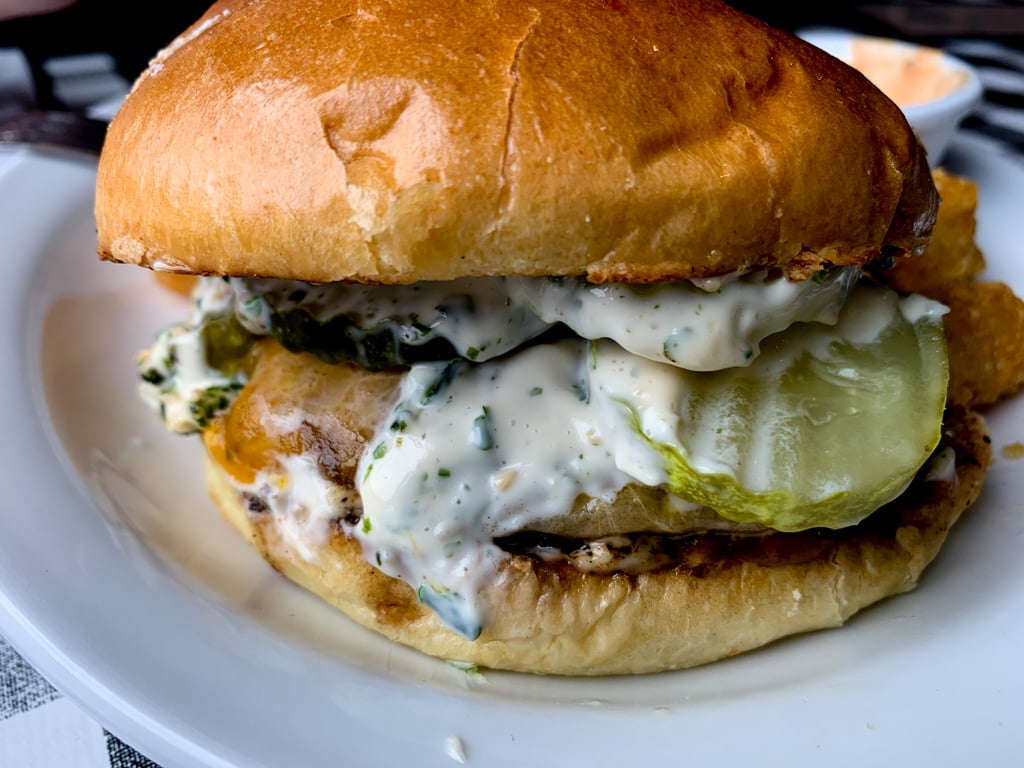 And we opted to try the tater tots and mac and cheese. 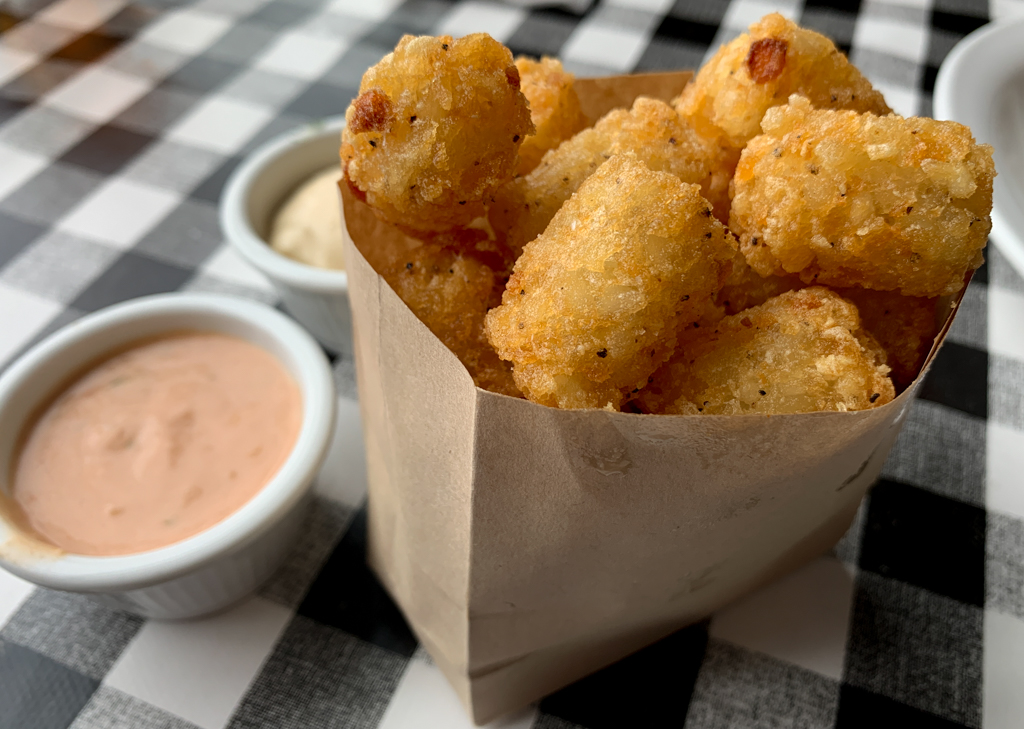 The tater tots were so dang good! They come with your choice of dipping sauce, and you can choose from sauce 42, garlic aioli, or a ranch aioli. 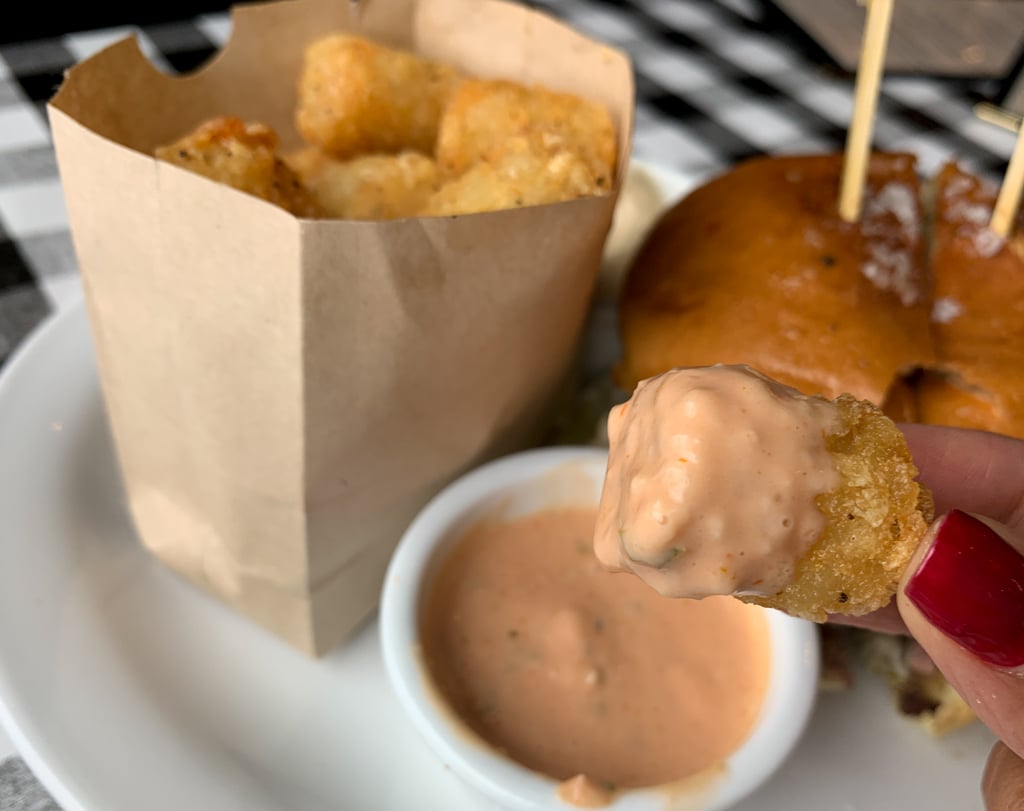 And I was a huge fan of the sauce 42. It reminded me of a cross between tartar sauce and Thousand Island dressing. 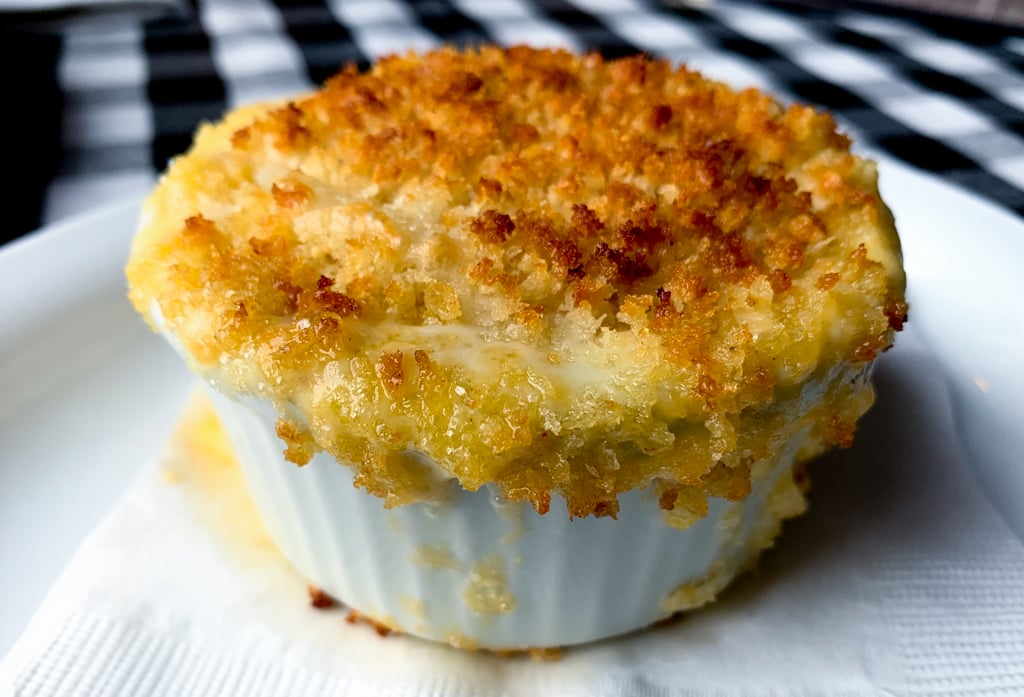 The mac and cheese was excellent. It had been dusted with panko and was nice and crunchy on top, and ooey-gooey inside. At $4, I thought this was a steal, and would also make a great kid-friendly option. 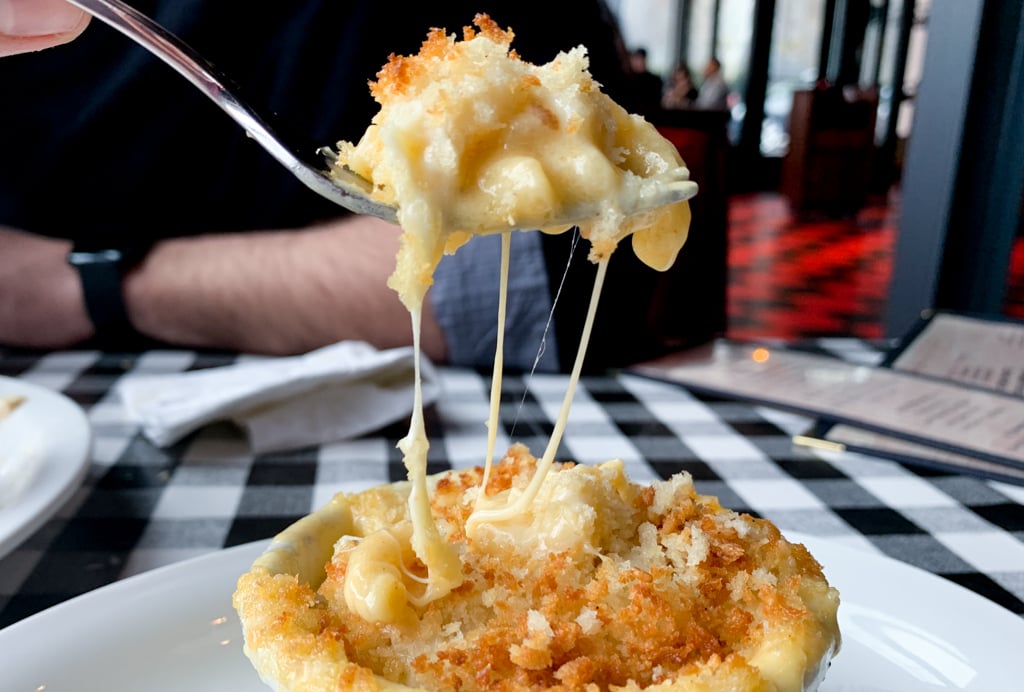 Look at that cheese!

I’m glad we opted to split a burger and two sides, because the burgers are massive. Side note: according to our server, the kitchen is more than happy to split your burger so you can share easily. 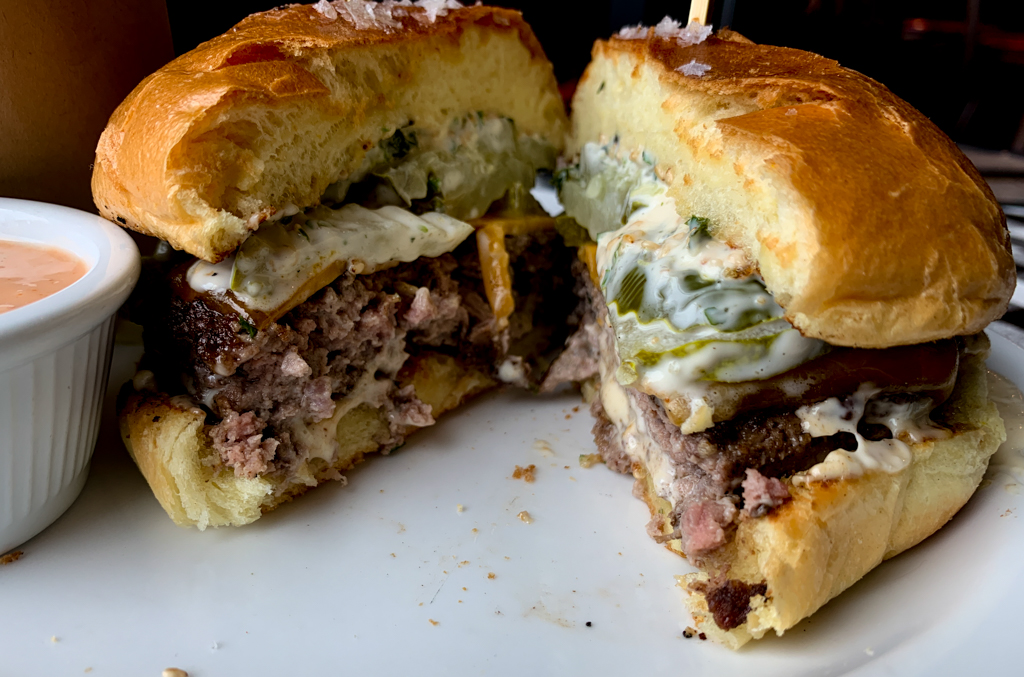 Try really hard to save some room for dessert, because the milkshakes at Forty Deuce are insane. 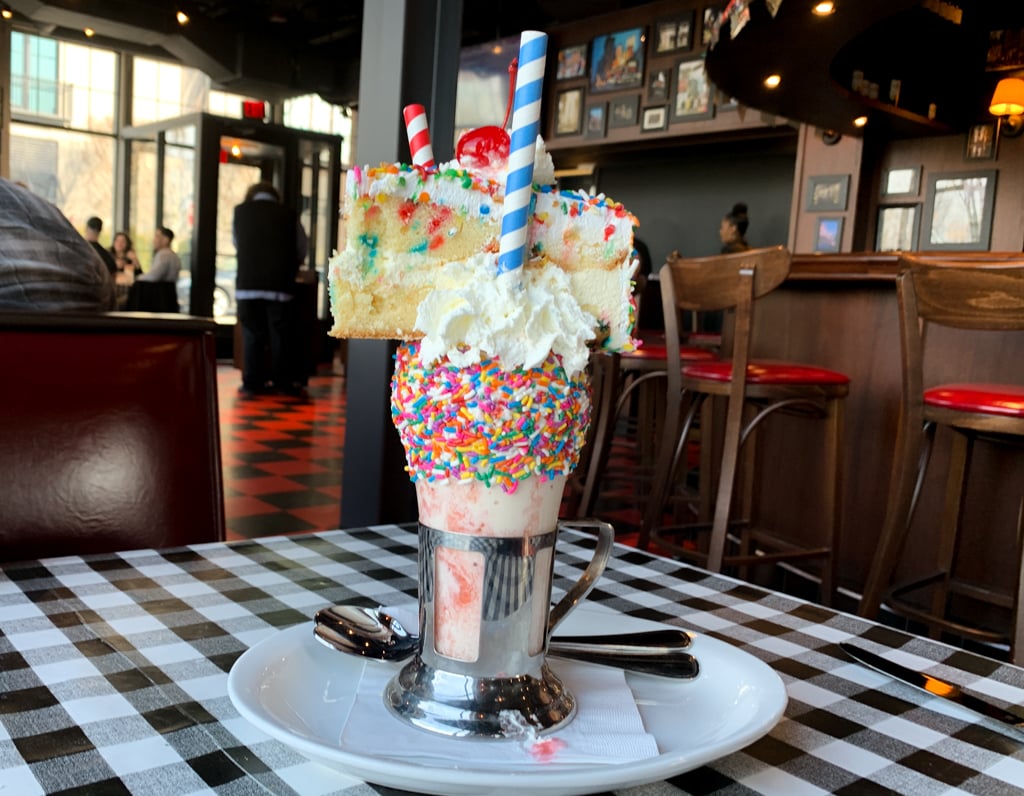 You guys – your eyes are NOT deceiving you. There is ACTUALLY a (large) slice of birthday cake on top of my milkshake.

Also, I’m not so good at taking pictures, so you’ll just have to trust me – this milkshake can easily feed 3+ people.

I mean the slice of cake on top of the milkshake alone could feed my family of three. Also, heads up, the prices on the milkshakes are a bit steep ($15) and you also have the option to make the milkshake boozy for an additional cost. 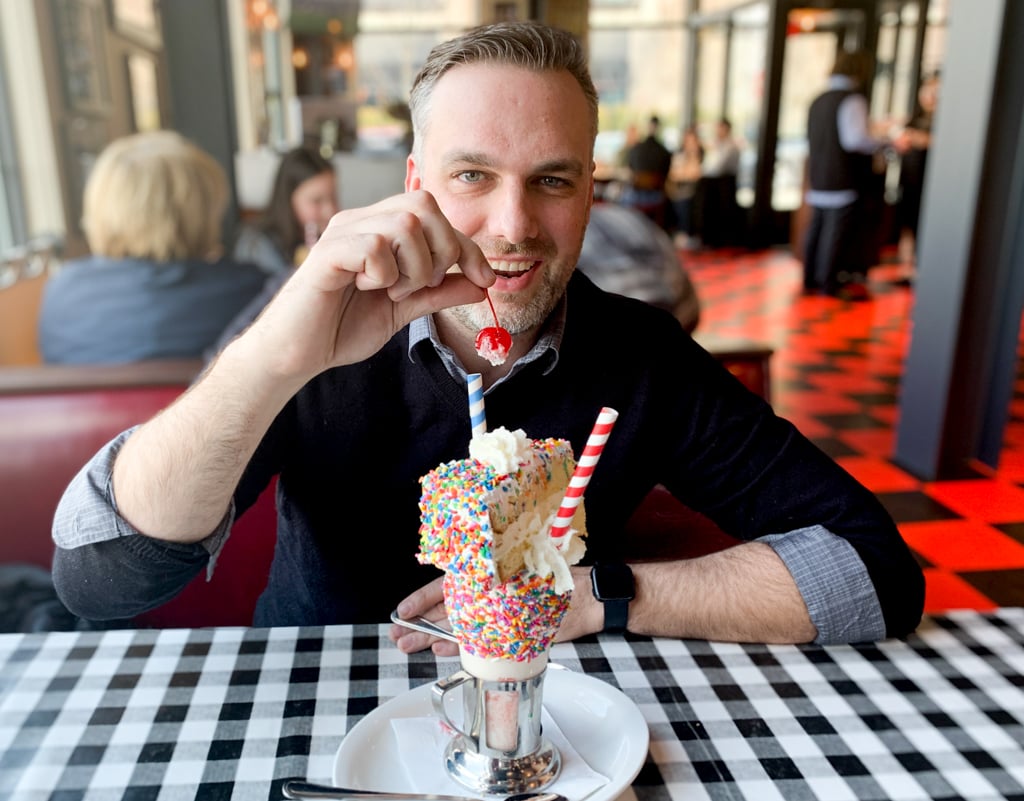 Ivan mentioned that they are adding to the menu and we’ll soon see 2 new burgers, 2 new shakes, and chicken and waffles on the menu.

Also because I am so nosy, I asked him if maybe, I could take a peek at the speakeasy and club area even though it was closed? And he graciously said yes!

Here’s how it works: 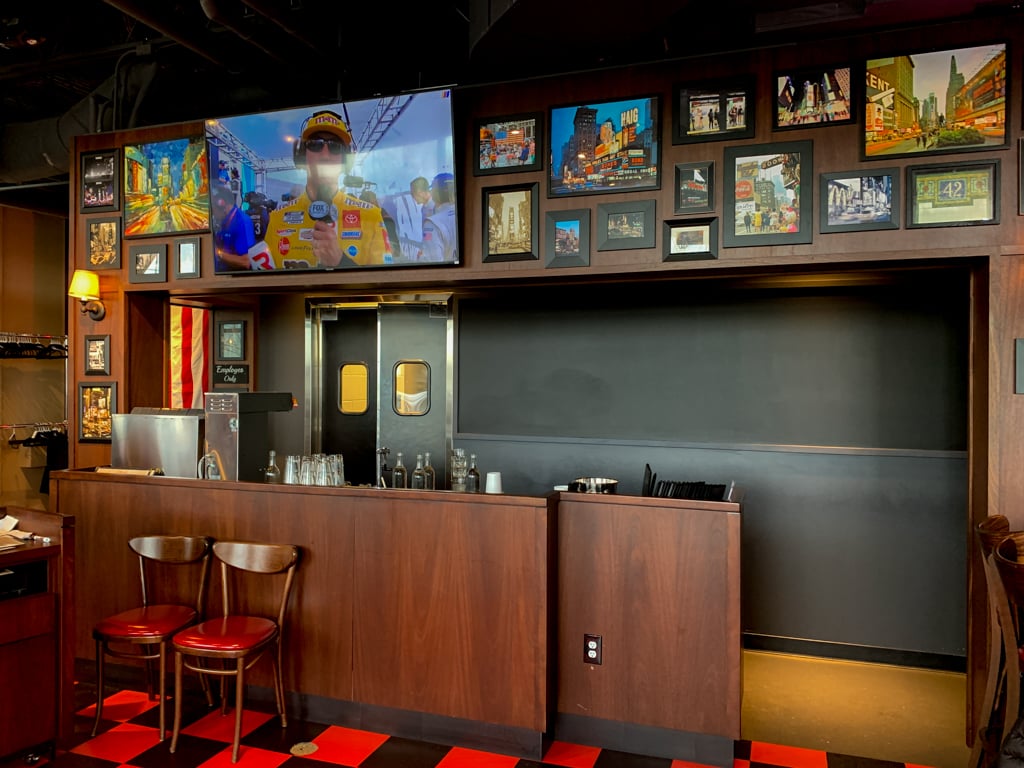 See the swinging kitchen doors in the photo? You walk through there – into the walk-in refrigerator, and up the stairs. 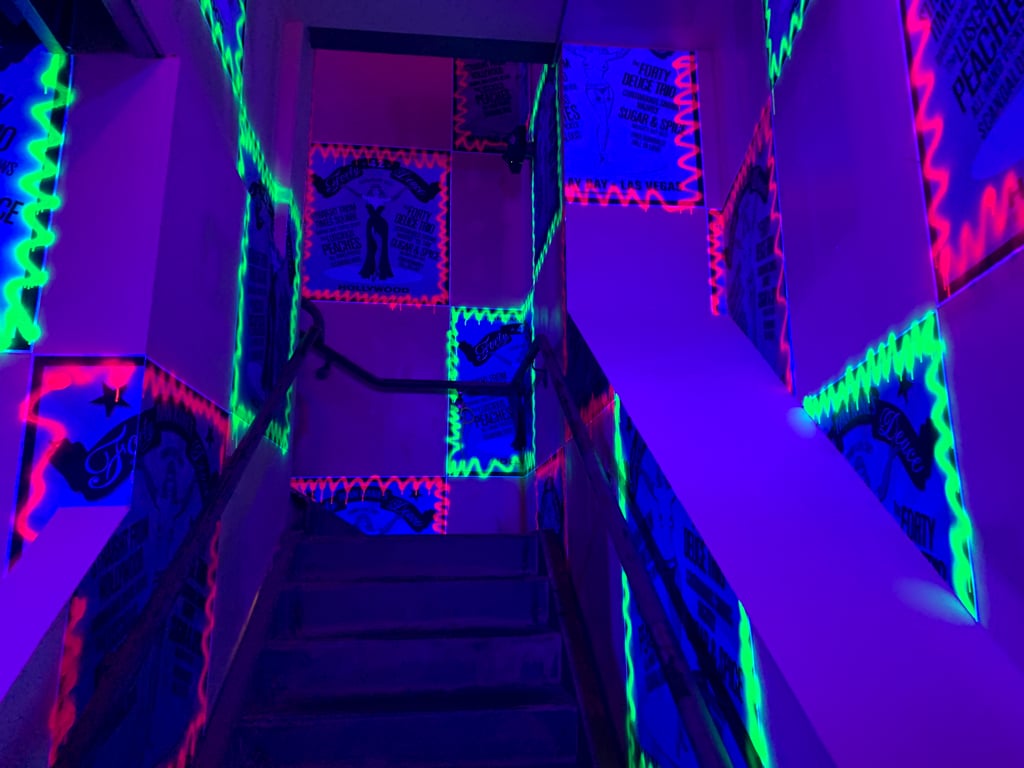 The stairwell leading up to the lounge/club area is super retro. 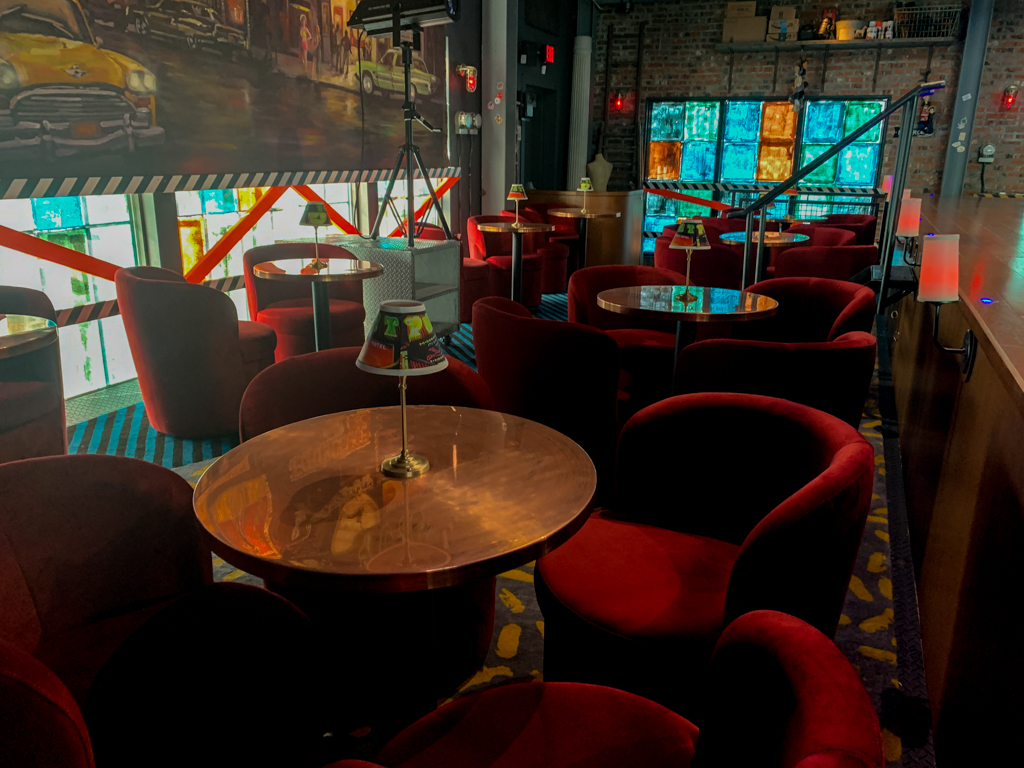 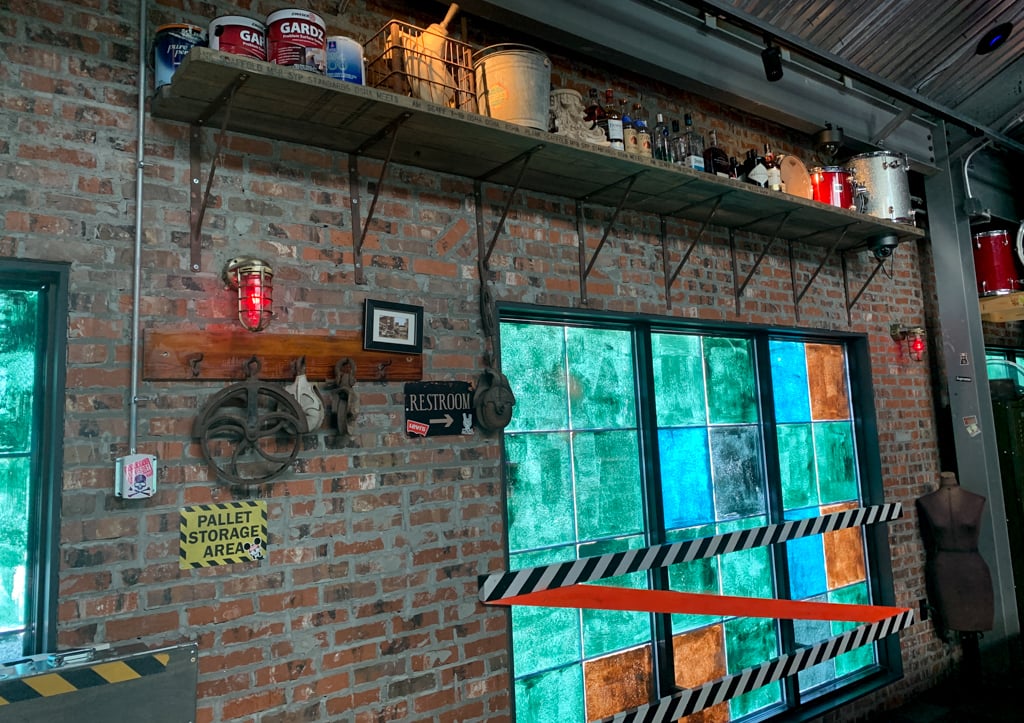 The walls are exposed brick and covered in kitschy artwork. The space totally gave off “theatrical warehouse” vibes. 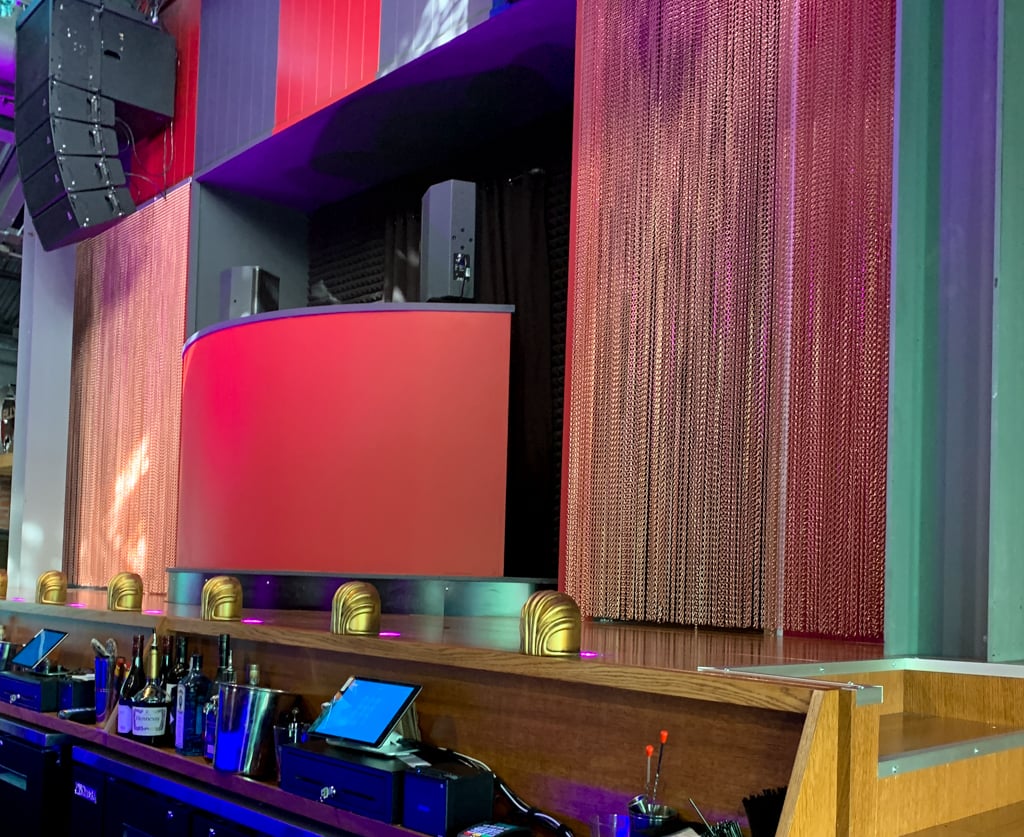 There’s also a large bar and behind it, the stage where all the magic happens.

Since I visited during the day when the club was closed, I wasn’t able to see it in all its glory. But check out their Instagram:

While the shows aren’t ticketed events, there is a $15 cover (per person) to gain access, plus a mandatory $2 coat check fee. This cover gives you access to the nightly shows – consisting of live music, dancing, burlesque and more.

You can also opt to book a VIP table (per person minimums apply).

Have you checked out Forty Deuce?