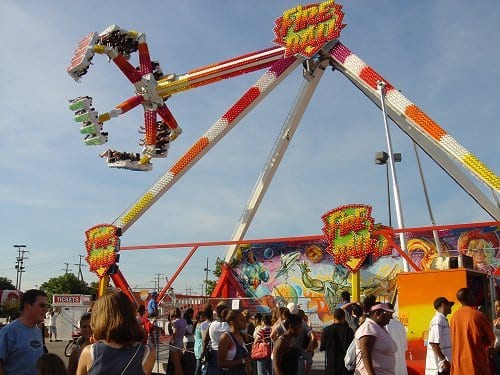 Fireball Ride Model At Fair Was Built In 1998, Manufacturer Had Major Safety Update in 2010

Details from the tragedy at the Ohio State Fair are beginning to emerge, detailing what went wrong on The Fireball.

The death of 18-year-old Tyler Jarrell sent shockwaves through the state. The incident, which injured 7 others, has hung over the Ohio State Fair since last week.

Amusements of America, the company that operates the rides for the fair reopened rides over the weekend, and issued a statement, blaming the ride itself, not operator or inspector error for the accident.

“The decision to shut down similar rides around the world and reopen the Ohio midway indicates that this is an issue with a specific ride and not the ride operator or inspectors. There is no evidence that operator error played a role in the accident. We continue to keep those affected by this tragic accident in our prayers and work cooperatively with the ongoing investigation.”

ABC6 On Your Side interviewed a former employee of Amusements of America, who shared a much different story. According to the report, the former worker, who wished to remain anonymous, said that there have been issues with the Fireball before.

“I do know they’ve had issues with that Fireball in the past. I have seen it rock in the past,” the former worker told ABC6.

The individual also explained that the ride rests on wooden blocks and is weighted down with water. They also claim that the rides are not inspected properly.

“I would not put my own children on these rides after what I’ve seen with the years of being there and neglect on some of the rides,” said the former worker.

According to State Inspection documents, the Fireball passed all inspections leading up to the event, both by the Ohio Department of Agriculture and Amusements of America. Most checks are visual, checking for proper installation, structural components, electrical components and more.

In October of 2016, the ride had its annual inspection in Ladson, SC at the Coastal Carolina Fair. This inspection consisted of an ultrasonic inspection of the Fireball’s gondola pins for defects. None were found defective.

When the Fireball was inspected on July 26, the date of the accident, it passed the standard inspection, including the visual structural inspection. It also received an NDT Certified inspection. That inspection was required after the 2007 service bulletin sent out by manufacturer KMG.

The ride at the Ohio State Fair was built in 1998. In 2010, KMG made updates to the Fireball (called Afterburner by the manufacturer) including a newly designed arm that connects the gondola with a steel plate and bolts and a lap bar instead of shoulder harnesses.

The Associated Press has reported that Tyler Jarrell’s family has hired an attorney to possibly pursue a wrongful death lawsuit. The Ohio State Highway Patrol is investigating the incident.