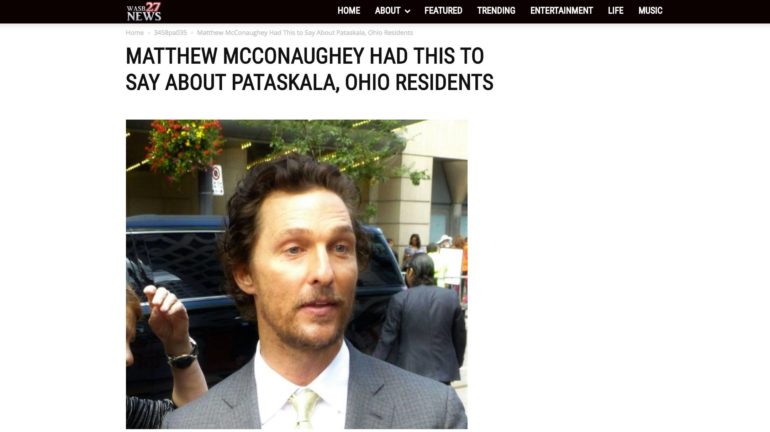 Matthew McConaughey Didn’t Break Down In Pataskala, And Neither Did Samuel L. Jackson In Sandusky

Although Matthew McConaughey was filming recently in Ohio, his car didn’t breakdown on the side of the road in Pataskala, and he didn’t share any thoughts on the Ohio town. The same goes for Samuel L. Jackson.

Of course, the Buckeye State loves when people have nice things to say about us, I mean, who wouldn’t? But it’s not always true.

Fake news has become a catch-all phrase in today’s society, most often applied to news people don’t agree with. But these viral articles shared by WASB27.com and other sites like it, are legitimately fake.

A disclaimer on the site’s “About” page reads,

DISCLAIMER:
wasb27.com is an entertainment website composed mostly of articles containing satire. None of the articles on wasb27.com should be considered true and are simply works of satire meant for entertainment purposes. You can contact us at: [email protected]

Articles such as these are often shared thousands of times, demonstrating the power of fake news, and its ability to trick people into believing demonstrable falsehoods.

In the Matthew McConaughey piece, the website describes McConnaughy as having car trouble. He’s met by a few people who offer to buy him lunch while they fix up his car. He grabs a bite to eat off of a generic road at a great diner and ends the conversation by stating he’d like to retire in Pataskala.

“So basically one of them has a cousin who owns a tow truck or whatever so they tow it in to get fixed and then they ask me if I want to get something to eat while I’m waiting on it and at this point I’m thinking, ‘Sure, what the hell’. I swear they had no clue who I was which just made it all even better.

“We had a great lunch at this fantastic place off of – I think it was Broad Street – and then they dropped me off at my car and I was on my way. Nicest people in the world. There just aren’t that many places like this anymore. I told them, ‘Someday I’m going to retire and I’m moving to Pataskala, Ohio!’” McConaughey said with a laugh.”

In the Samuel L. Jackson story, the location has changed, but the details remain the same.

“Then one of them says that he has a brother who owns a tow truck and a few minutes later it showed up and they towed it in to get fixed.

“So now we’re talking and I’m telling them that I’m just passing through the area and they offer to take me in to get lunch while my car is getting fixed and I’m thinking, ‘Sure, what the hell.’ So we drove to what is probably the finest dining spot in all of Sandusky – some place on Cleveland Road, I think it was – and had one hell of a great sandwich.

“And these guys had no idea who I was which, honestly, just made my day. I’m telling you, these people in Sandusky are the real deal. If I ever retire, I’m moving there!” Jackson said with a laugh.”

These aren’t the only two examples of fake celebrities news impacting smaller, local markets. Buzzfeed compiled a list of more than 750 fake news websites dedicated to publishing stories just like these.

From “[Celebrity] Moving To [Small Town]” to “[Celebrity] walked into [Town or city] Restaurant”, these fake news articles target the high shareability of big celebs paired with people’s hometowns.

These sites are designed for one reason: profit. With a viral headline, more shares mean more clicks. Which translates to money through programs like Google Adsense. With some articles being shared tens of thousands of times, the rewards can be high.

Although a lot of the blame can be placed on the manufacturers of fake news, there is a certain factor of personal responsibility. There are plenty of ways to check if the news you’re reading is real or fake before you share with your friends on social media.

The International Federation of Library Associations and Institutions made a simple infographic designed to help readers get to the bottom of articles they’re reading. 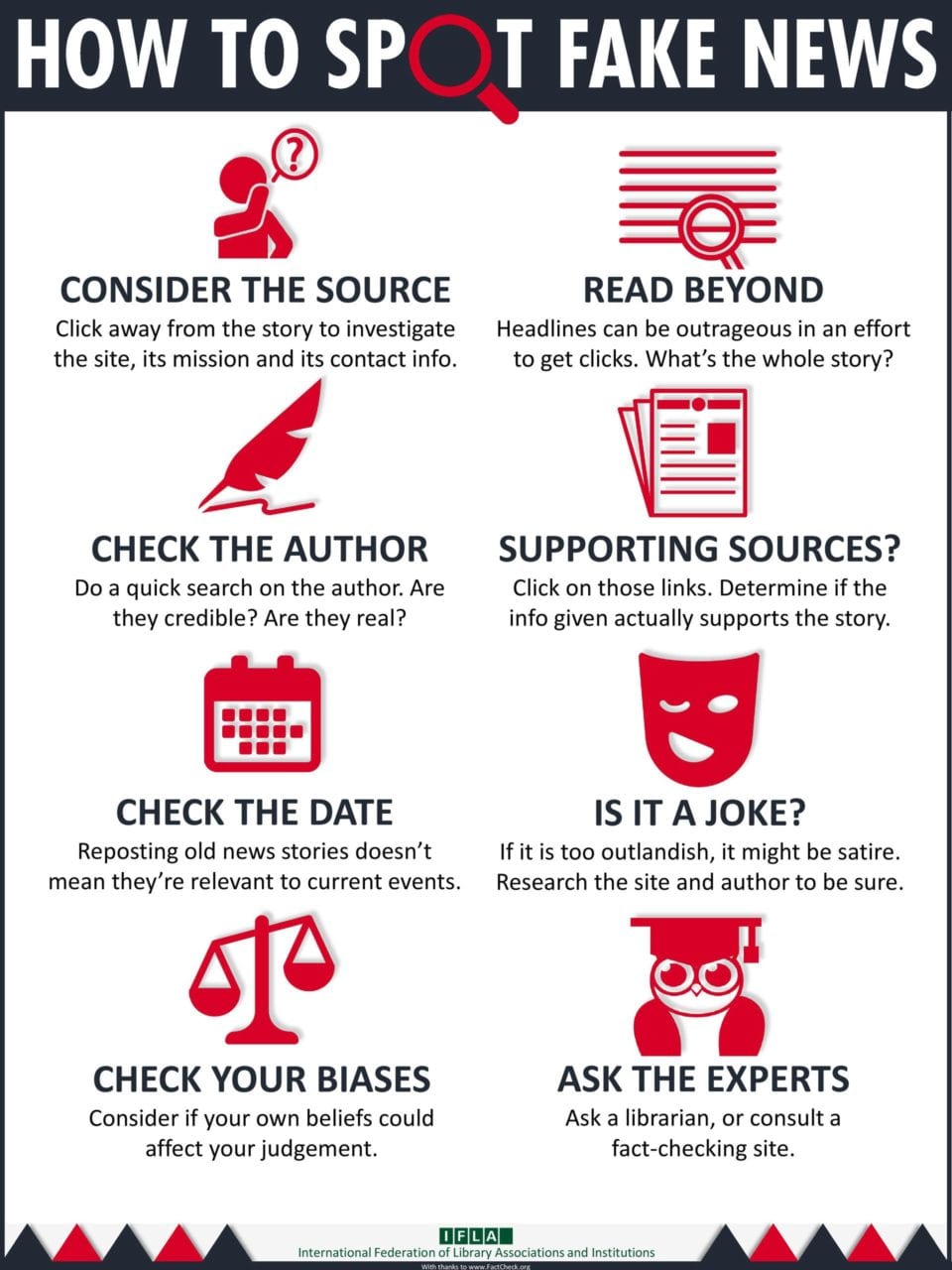 Additional resources such as Snopes.com, Politifact, and FactCheck.org are also available.