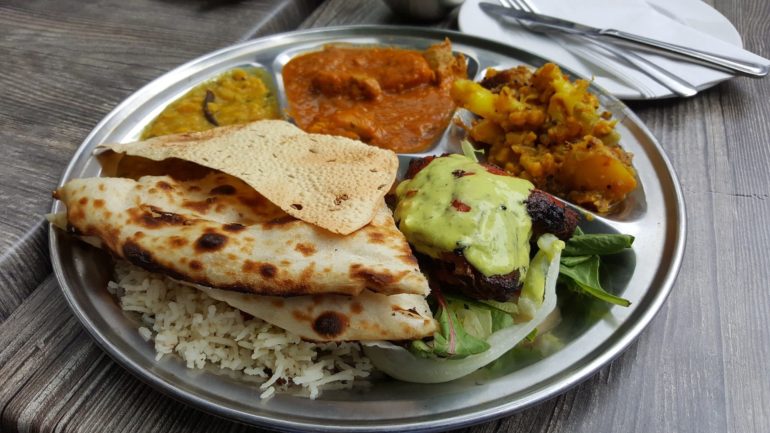 Now might also be the time to disclose that I’m Indian.

If you’re committed to getting to the end of the Columbus Tikka Trail, you need to know that there’s no stamp to collect in a tiny book. No t-shirt to display proudly. No cute glass with a logo to set on your shelf.

But even I know that it can’t be an official food trail without a hashtag, so if you’re cool enough to attempt the Columbus Tikka Trail – show us your eats with the hashtag #614Tikka.

The only prize at the end of the trail is the knowledge that you are now a tikka masala connoisseur.

Which is pretty damn sexy.

In case you’re wondering why I’m listing restaurants based on their chicken tikka masala, it’s because I believe that’s the standard by which an Indian restaurant should be judged. *Vegetarian friends, I totally get you and truth be told, it’s not the chicken that makes this dish, but that delicious masala sauce…so play along by ordering paneer tikka masala instead!

Here’s the thing, when I go into an Italian restaurant, the first thing I expect to be delicious is the red sauce. If it’s not, I’m not interested in anything else.

That’s how I feel about chicken tikka masala. 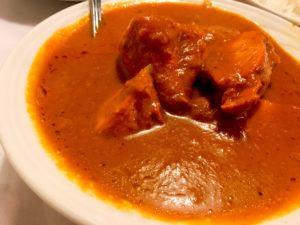 For all of you unfamiliar with the magic of chicken tikka masala, let me break it down.

Chicken tikka is chicken marinated in yogurt and a ton of spices, and then roasted in a tandoor style oven. Next, it’s simmered in a masala (creamed tomato sauce) with more spices. This results in an amazingly tender, flavorful chicken in a thick, creamy sauce.

One other important note: butter chicken is really similar to chicken tikka masala. So similar in fact, that I couldn’t tell you the difference. They are both dishes that have marinated chicken cooked in a tomato cream sauce. We’ve even gotten an order of butter chicken and chicken tikka masala at the same restaurant at the same time, and could hardly discern between the two.

Whenever we’ve pointed them out to our waiters at various Indian restaurants, we’ve usually gotten an answer like “well, it’s same-same, but different. You will like either one.”

So folks, whether you order the butter chicken or the chicken tikka masala – you’ll love it.

Ready to get started?

The first stop on the Columbus Tikka Trail is Cake Walk Indian Restaurant and Bakery. They have a really solid chicken tikka masala and it’s probably my favorite tikka masala in the city. There. I said it. Now the secret’s out. It’s spicy, full of flavor and served with my favorite type of Indian flatbread: paratha. Parathas are truly magical, with their buttery, flaky layers. Kind of like a croissant, but in flatbread form.

Other things to try at Cake Walk:

One of my favorite things about Cake Walk Indian Restaurant and Bakery is that they have a lot of Indian street food that I rarely see served outside of Indian homes. I recommend trying their samosa chaat (what a foodie might call “deconstructed samosa” topped with various sauces and crunchy bits), their bhel puri (a savory, spicy dish of rice crispy-like cereal, sauces, and more crunchy bits) or pani puri (littles puff of dough stuffed with mashed potatoes, and a savory tamarind sauce).

Please note that their dishes use authentic levels of heat so buyer beware.

Also, they have a TON of delicious cakes and desserts (they do have “cake” in their name afterall.)

We’ve only made it to the first stop, but I bet your mouth is starting to water. It’s probably the spices. Ready to keep going?

The next stop on the Columbus Tikka Trail is Tandoori Express. It is an Indian-Pakistani joint with awesome chicken tikka masala. I really love stopping by for a quick lunch when I’m in the area. It’s uber casual, counter service and while a few menu items take a bit longer to make, the service style reminds me of a food court Chinese spot, where you have your choice of 1, 2, or 3 entrees, served with rice, salad, and naan.

Pro tip: Always select 3 choices, and just for fun, get both the chicken tikka masala and the butter chicken and hit me up and tell me if you can tell the difference!

Other things to try at Tandoori Express:

For the third choice, I highly recommend one of their kabobs. In fact, go with a friend so you can order ALL their kabobs and try them. They are unbelievably good…I think my favorite is probably the ground beef kabob but the lamb kabob is a close second.

So, I’d love it if you would order both the butter chicken and the chicken tikka masala. Hit up #614Tikka and let me know if you can tell them apart.

I’m excited to share the next stop on the tikka trail, which is basically a Columbus institution. Well, at least for my family.

Amul India has the mildest chicken tikka masala on the trail, which is great if you’re a huge fan of flavor but not a huge fan of the heat. Whenever someone asks me to recommend an Indian restaurant, Amul is the one I turn to. It’s just solid all around and has the best Indian lunch buffet in Columbus. If you go check out the lunch buffet, make sure you grab a cup of complimentary chai and try their yummy desserts.

Other things to try at Amul India:

They have thalis – which is basically a large platter with various options to try. You can pick from vegetarian or non-vegetarian thalis. I also highly recommend their lamb korma and their chili paneer!

The next stop on the Columbus tikka trail is probably the most authentic out of the bunch. Grab a glass of lassi (traditional mango-yogurt smoothie) and let’s go.

Bawarchi Biryanis is our family favorite. It’s my five year old’s favorite restaurant in all of Columbus and she pretty much asks us to go daily. They have an awesome chicken tikka masala, and it is SPICY! I don’t know if they make a mild version because I’ve honestly never asked.

Other things to try at Bawarchi Biryanis:

Part of the reason we love Bawarchi Biryanis so much is that it’s unapologetically authentic, and also because they do both north and south Indian fare so well. My little one’s favorite meal in the whole wide world is dosa. For those of you unfamiliar, it’s kind of like a giant, crispy burrito rolled around various fillings and served with an array of dipping sauces.

These are NO JOKE at Bawarchi, they are GIANT. I’m talking from my elbow-to-the-tips-of-my-fingers giant. She loves the masala dosa.

Another fun thing to try is their rava dosa, the wrapper is even thinner and crispier than a traditional dosa! My husband’s favorite is the chicken tikka masala, which he prefers with garlic naan vs. rice. And I LOVE their biryani. My favorite is the Hyderabadi goat biryani, but the chicken version is also excellent.

Ready for something a little different? Last on the list is a pretty unique combo!

Tadka is an Indo-Chinese spot which means their chicken tikka masala has a bit of an Chinese flair to it. It’s really tasty! For those of you unfamiliar with Indo-Chinese, also referred to as “Hakka Chinese”, it is basically Chinese dishes made with Indian spices to appeal to Indian palates. This style of cooking originates mainly from a small Chinese community that has been living in Kolkata, India for over 100 years! My parents were from Kolkata and whenever we’d visit family in India, they loved taking us to have a meal there. The story goes that the first time my toddler self saw someone who looked ethnically Chinese speak to me in perfect Bengali, I literally opened my mouth in shock and had food tumble out of my mouth!

Other things to try at Tadka:

I really enjoy their lunch buffet, so definitely try to make it out for that! I also think they have the best chili paneer in the city! Paneer is a soft farmer’s cheese made from cow’s milk. It’s usually cut into cubes before being added to curries (it resembles tofu) and chili paneer is my favorite paneer dish. Basically, it’s paneer that’s been lightly fried with peppers and onions and then tossed in a fantastic tangy and slightly spicy chili sauce. It’s usually served as an appetizer but Tadka’s version is good that I’ve gotten two orders for myself and called it dinner.

Also, make sure you sample their hakka noodles and gobi Manchurian. Another one of my Tadka favorites is their sarson ka saag – which is a curried dish of mustard leaves. This is one of those super traditional dishes I grew up eating at home and they have a really delicious version.

I hope you enjoy checking out some of my favorite Indian restaurants in Columbus. There are so many other places I didn’t mention and a few that are still on my list to try (Haveli Bistro, I’m looking at you….)

If you have a favorite Indian restaurant that you think deserves a spot on the Columbus Tikka Trail – leave me a comment and tag your plate of chicken tikka masala with #614Tikka.