The Story Of Circleville Residents Squaring Their Circle

The etymology of town and city names often leads to a fascinating history.

Clear The Field: It’s Going To Be Richard Cordray vs. Mike DeWine for Ohio Governor

Before Columbus’ Mass Floyd Protests, There Was Christopher Radden

OSU Will Require Vaccines For All Students, Faculty, And Staff

Sometimes though, it’s more a case of what you see is what you get. This is true with Circleville where it turns out, as one might expect, the city really was laid out in a circle:

“The city’s name is derived from its original layout created in 1810 within the 1,100 ft (340 m) diameter of a circle of a Hopewell tradition earthwork dating to the early centuries of the Common Era. The county courthouse was built in the center of the innermost circle. By the late 1830s, for numerous reasons, residents decided to gain authorization from the state legislature to change the layout to a standard grid, which was accomplished by the mid-1850s.” 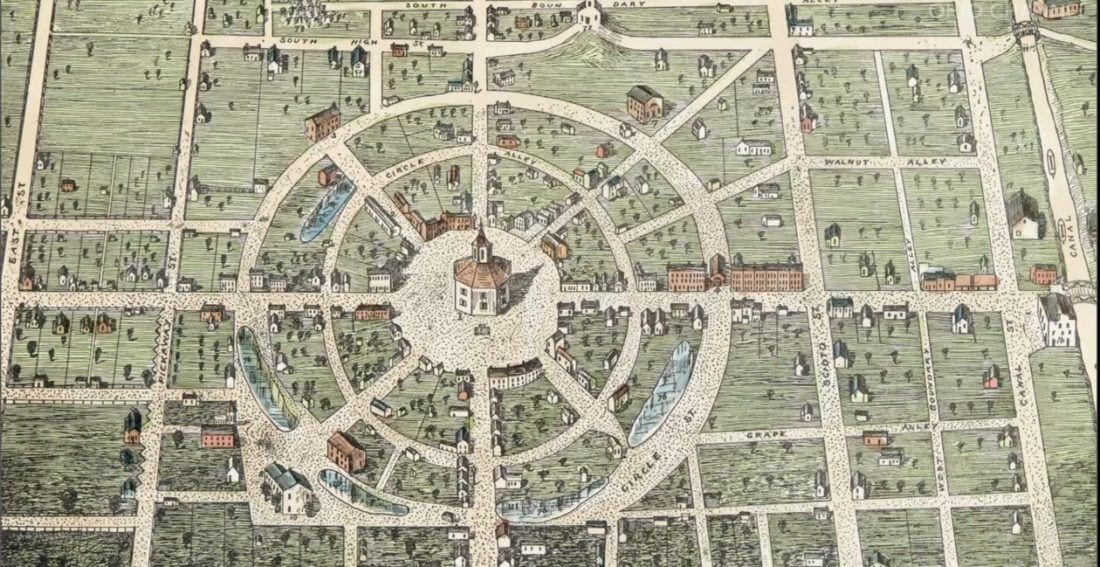 Some of the reasons Circleville residents wanted to eliminate the circle layout?

A local history book noted that:

“It has often been a matter of regret to the citizens of Circleville to the present day, that the original conformation of the town was ever changed. The most unique feature about the place, from which the town derived its name, was obliterated in order that the streets be in checkerboard fashion, running at right angles to each other.”

A town laid out in a circle could conceivably have some tourist appeal today – perhaps even as much as a pumpkin show, so it is a bit of a squandered opportunity.

Most regrettably though, all traces of the Hopewell earthworks were destroyed when the town’s grid was changed.