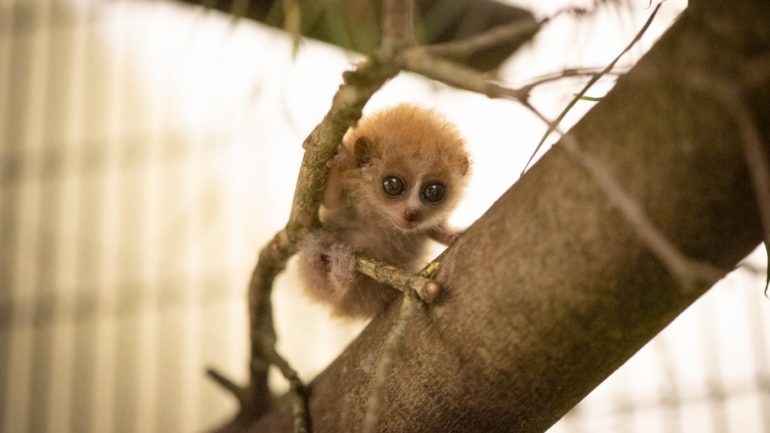 Spring is the best because it means we get to be introduced to tons of new baby animals at the Columbus Zoo and Aquarium.

On February 24, a baby pygmy slow loris was born at the Zoo. Although the sex of the baby hasn’t been determined, the baby is doing well and living with mom Gouda and dad Muenster. Yes, they actually have cheese themed names, as if this story needed to be any cuter.

The pairing of Gouda and Muenster was recommended by the Species Survival Plan, a program that the Association of Zoos and Aquariums coordinates to maintain genetic diversity for threatened and endangered species that live in human care.

The pygmy slow loris is listed as “vulnerable” on the International Union for Conservation of Nature Red List of Threatened Species due to habitat loss and wildlife trafficking. These little primitive primates are cute as a button, and the illegal pet trade has devastated their wild populations.

The pygmy slow loris is a nocturnal prosimian that lives in Southeast Asia, specifically Vietnam, Cambodia, Laos, and southern China. They’ll eat anything from fruits to small insects and they’re one of the only venomous mammals. When the loris licks a toxic secretion from the inside of its elbows, it causes their bite to become venomous.

This little cutie is still living behind-the-scenes at the Zoo with its parents, but once it starts to become more independent, the Zoo staff will be able to determine its sex and guests will be able to view it.

I assume the baby will also get a cheese themed name. I don’t know about you, but it looks like a Gorgonzola to me.