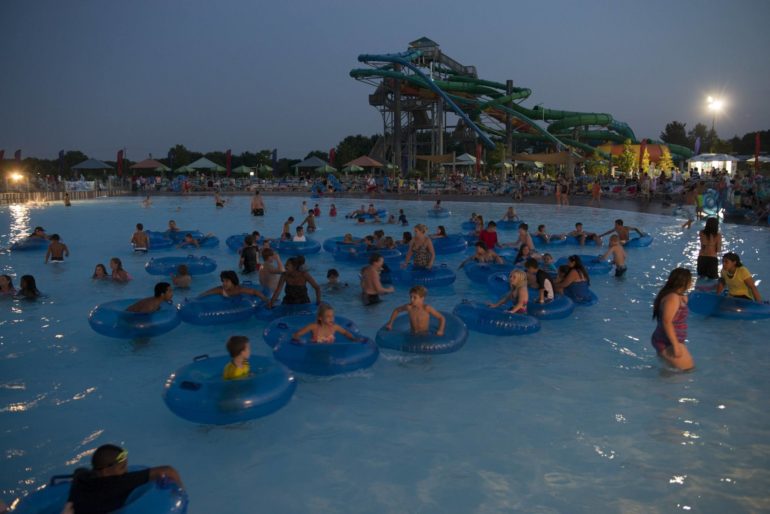 Hit The Park After Dark During Zoombezi Bay Summer Nights

Zoombezi Bay Summer Nights, presented by Swedish Fish, will have family-friendly activities including live music, meet and greets with animals, and an outdoor movie in the wave pool.

Summer Nights start at 6 p.m. Some favorite rides and attractions, including the all-new Otter Banks area, Cyclone, SoundSurfer, Big Boa Falls and more, will be open until 11 p.m.

Each Summer Nights event will be showing a family-friendly movie at 9 p.m. on a jumbo screen at the Wild Tides Wave Pool. You can enjoy the show from a floating innertube or stay on dry land in a chaise lounge chair along the shore. This summer’s lineup includes:

The mischievous minions return in the hope that Gru will return to the dark side after his boss at the Anti-Villain League fires him. Instead, Gru travels to be reunited with his long-lost twin brother. The siblings find themselves in a pickle when they are forced to join together to fight back against a vengeful villain once again.

“After an invasion of the Bergens (miserable creatures who only feel happiness after eating a troll), Poppy and Branch join forces to rescue their friends. While the two are an unlikely match, with Poppy’s enthusiasm and Branch’s pessimism, their mission is full of adventures and mishaps as they attempt to work in harmony to save the day.”

“Following a ghost invasion of Manhattan, paranormal researcher Abby Yates and physicist Erin Gilbert join forces to prove to society that ghosts do exist. They enlist the help of nuclear engineer Jillian Holtzmann and subway worker Patty Tolan to prepare for an epic battle against the supernatural.”

“In order to save a once-grand theater fallen on hard times, dapper koala Buster Moon strives to preserve the theater by producing the world’s greatest singing competition. Animal singers come from all corners to step into the spotlight and dream big in the name of saving the theater from ruin.”

“Follow the adventures of Buddy the Elf as he travels all the way from the North Pole to be reunited with his father. Along the way, Buddy spreads Christmas cheer to every cynic he meets with his childlike antics.”

“This thrilling animated movie follows Batman as he tries to save Gotham from the clutches of the Joker. In order to save the city, Batman must learn the importance of teamwork alongside his superhero sidekick Robin and loyal butler Alfred.”

Although regular admission rates apply for each Summer Nights event, guests who visit Zoombezi Bay after 5 p.m. on the night of the event and use the code phrase, “Swedish Fish Tropical,” at the ticket booth will receive discounted admission for $10 per person.

After 8 p.m., guests using the code phrase will receive $5 admission per person. Plus Zoombezi Bay will be giving away Family 4-packs each week on Facebook to followers who enter the giveaway.