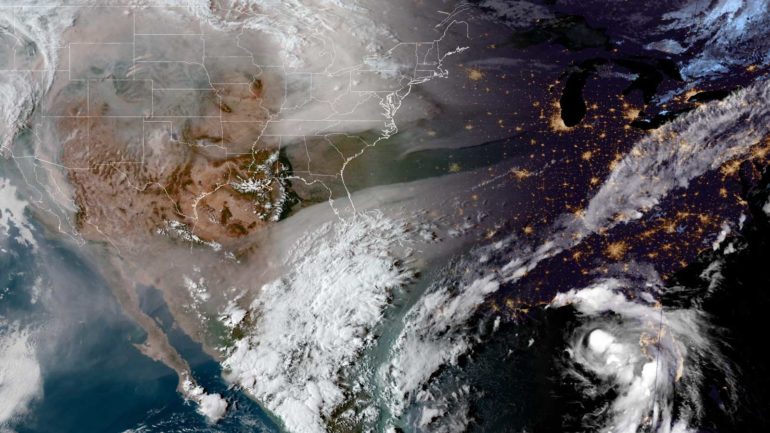 If you’ve noticed that the skies over Ohio have looked a little hazier than usual, you’re not imagining it.

A layer of smoke has crossed thousands of miles across the United States from the firest on the West Coast into the Ohio Valley area, causing a high-altitude hazy. The fire has burned over 4 million acres west of the Rocky Mountains, and although we are seeing the visual effects here in Columbus, we aren’t suffering from a huge difference in air quality.

On Monday afternoon, satellite images from the National Oceanic and Atmospheric Administration (NOAA) showed the massive plume of smoke crossing towards the East Coast of the US.

By now you’ve likely seen the apocalyptic red skies over West Coast cities. Thankfully, we’re far enough away here in Columbus that the particles traveling in the smoke plume will mainly be responsible for the haze we mentioned earlier and perhaps some more vivid sunsets.

The Bay Area in California awoke to a scene straight out of Mars.

Orange and even red skies blanketed San Francisco, Oakland and Berkeley, and ash rained down, with wildfires raging far in the distance. https://t.co/Gv9RhCihGB

2020 has been a record fire season in Washington, Oregon, and California. The wildfires have killed dozens and six of the fires that are currently burning are among California’s largest on record.

Hazy sky in southwest Ohio due to western wildfires pic.twitter.com/A3t0VyvwvS

Climate Change is the key driver of these extended seasons. The amount of land burned in the last week is more than the total burned in all of 2018, and sadly over double the land that burned in 2017, according to data released by the California Department of Forestry and Fire Protection (Cal Fire).

While the hazy impact on Columbus is relatively low, regions in northeastern Ohio are experiencing a much thicker haze.

Smoke from the historic wildfires out west has reached Toledo and northwest Ohio today creating the hazy skies and blocking out the sun. pic.twitter.com/P6elMD2NkV

As fire season continues on the West Coast, it’s likely that we’ll continue to see some impacts due to smoke and other particles traveling in the atmosphere.