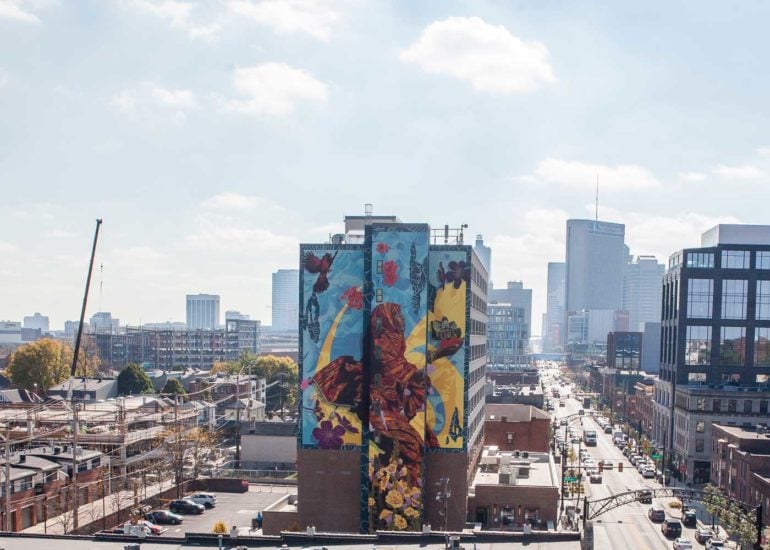 These Augmented Reality Murals In The Short North Are Seriously Breathtaking

If you haven’t had the chance to visit the Short North lately, you’re missing out.

Mostly because there are some incredible new augmented reality murals waiting for you. The three murals along North High Street were created by Eric Skotnes and Ryan Sarfati, and they are each enhanced by downloading an app to your phone.

When viewing the murals through the app, they will transform in front of your eyes, bringing the art to life.

The murals cover a total area of 11,000 square feet, which makes them the largest augmented reality mural experience in the world. Once visitors to the murals download the app, they just have to point their camera towards the mural to experience beautiful hummingbirds, flowers, and other characters from the mural in real-time 3D.

Ryan Sarafati, who goes by Yanoe, is a Belgium American artist born in Baton Rouge, Louisiana. He began writing graffiti at the age of 11 and by the age of 17 was one of the most prolific names in Los Angeles. Yanoe has painted in over 20 countries and appeared in multiple art publications around the world. You may have seen more of his work around, since his client list includes Nike, Urban Decay, Headspace, Google, Apple, Facebook, and Netflix.

Yanoe was joined on this endeavor by his fellow artist Eric Skotnes, who painted one of my all-time favorite laughs, a portrait on Parks & Rec featuring Leslie Knope and her nemesis, Jeremy Jamm.

The duo was chosen out of 50 artists who applied to create the mural for The Graduate Hotel building. Skotnes decided to illustrate a journey in the mural once he learned of the large population of Somali immigrants in Columbus.

The immigrant’s journey to an unknown place “takes a lot of strength, a lot of resilience,” Sarfati said, noting that when they arrive, the hope is to prosper “in abundance,” and have the chance to flourish or “bloom” in another place.

The designs include a kneeling Somali Woman (Hodan Mohammed, founder of the Columbus Somali Festival, as well as god-like mythological figures on the opposite side of the building. The journey was completed with a smaller mural depicting hummingbirds.