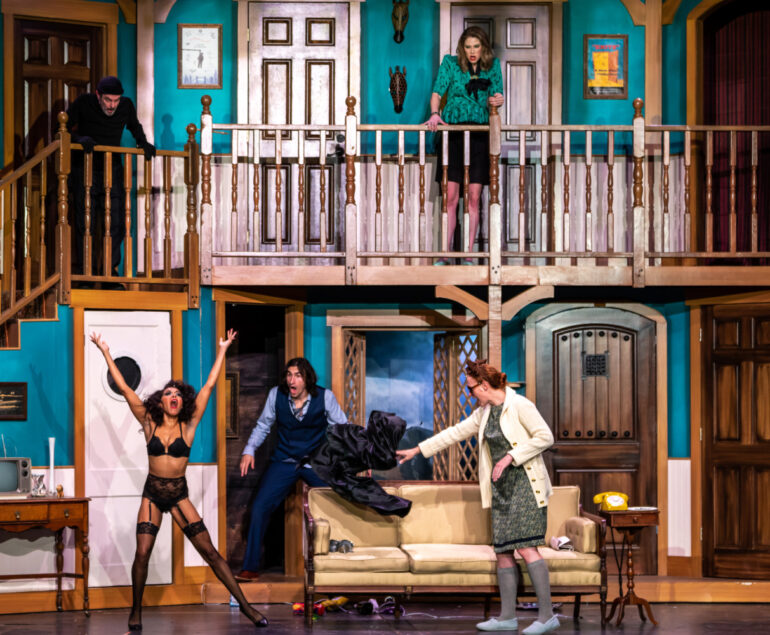 💸 This post is sponsored by Short North Stage. But rest assured, all thoughts and opinions contained within are genuine and our own. 👍🏼

Looking for something dramatic and hilarious to do this weekend?

Short North Stage’s production of Noises Off should be on your list. The production opened last weekend, but don’t fret, there’s still plenty of time to see the show. Noises Off takes the audience backstage. The play tells the story of an acting troupe as they perform various versions of the play within the play, Nothing On.

Each act (there are 3) shows different iterations of the performances, as well as showing the performers off the stage. Noises Off burst onto the stage in London’s West End in 1982 and was on Broadway the following year. The show earned several Tony nominations including Best New Play. Since then, it’s been a staple production both on and off-Broadway.

The Short North Stage’s production is full of local talent that will have you laughing (and crying from laughing) all night long. When I say all night, I’m not being dramatic. The show runs for over 2 and a half hours. But I also really mean it when I say that it won’t feel that long. The show is engaging and entertaining, easily keeping the attention of the audience.

This year marks the 10th Anniversary of Short North Stage and they’re one of those organizations that never fails to impress. From their set design to their costumes to their incredible cast and crew, the productions that they put on are such a treasure for the Columbus performing arts community.

Noises Off runs through September 19. You can grab tickets or more info by visiting the Short North Stage website.

P.S. Noises Off may only run through September 19 (seriously, go buy your tickets) but that doesn’t mean the fun stops. Short North Stage has a fantastic line-up of shows this season, including Young Frankenstein, Sister Act, Altar Boyz, Little Shop of Horrors, and Spring Awakening.