The 5 Most Overlooked Hidden Haunts In Columbus

As Halloween creeps closer and closer, horror enthusiasts throughout central Ohio will be searching for thrills off the beaten path. Columbus famously has haunted locations like the Thurber House and Walhalla – but what about chilling secrets lurking just beyond a busy road or even behind the North Market?

Journey Around The World At Franklin Park Conservatory’s Topiary Takeover

A New Community Market Is Starting This May In Merion Village

This season, you may be looking for something new or untold. For those who relish oddities, you’ll be pleasantly surprised by the mysterious places our city has to offer.

Any seasoned adventurer who is a fan of the bizarre, strange, or even historical will enjoy visiting these lesser known haunted gems this October. So bundle up, bring a friend, and map out your own personal ghost tour before the month is up. And who knows – maybe you’ll uncover a new tale along the way. 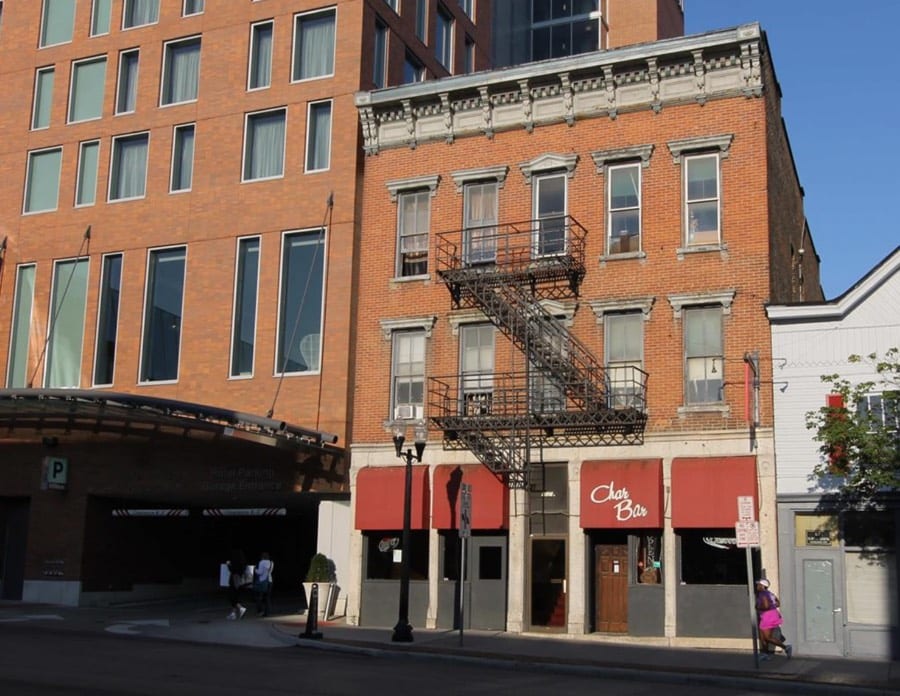 With a lower level that formerly functioned as a funeral parlor for Egan-Ryan Funeral Home and a bar that serves perhaps the largest Long Island Iced Teas in town, Char Bar is a chill dive for anyone looking to buy a drink that comes with a complimentary “I feel like someone is watching me” sensation. Located off of North High Street (behind the North Market parking lot), the bar sits on top of what used to be the Columbus’ Old North Graveyard. In the 1800’s, many of the bodies were moved from the site to Green Lawn Cemetery, but not everyone was found – meaning some were inevitably been left behind.

If you venture down the stairs into Char Bar’s basement, you’ll find restrooms finished with pastel pinks creating the aesthetic of a toddler’s springtime photo shoot. Outside of the facilities sits an old piano, and heavily locked, small doors that lead to the other side of whatever is still underground.

In the 1800’s, the lower area actually used to be street level, with a tunnel leading to the other side of North High Street to Union Station. Now, the tunnel is said to be home to a dark, hooded specter. To those who may be too nervous to venture down to the restrooms alone, have no fear. Sometimes the piano plays a few notes by itself – which is comforting, right? Especially since it doesn’t have any keys.

Fans of the visual arts will enjoy the Columbus Cultural Arts Center, located by the Scioto Mile. Built in 1861, the building was originally constructed as the Ohio State Arsenal and continued to serve the militia until the late 1970’s when it was officially taken over by the Columbus Recreation and Parks Department. Today, the center is open each day, free for guests to wander through innovative art displays and visit the gift shop. Besides acting as a hub for art and Italianate architecture, the center also offers classes, a working space for a variety of artists, and two different apparitions.

The first alleged spirit is a woman in period-appropriate clothing. She has appeared multiple times in the pottery room and is thought to have been involved in a nearby public hanging, many years ago. Her reason for occupying the room now? Unknown. But in her defense, I also love a well-crafted ceramic vase.

The second spirit is an unsettling entity who haunts the basement, although little is known about why they’re there, or who they might be. If you happen to visit the basement and don’t encounter the spirit, don’t be too disappointed – there are sometimes groups of mannequins that have been stored away by the working artists, which are guaranteed to be just as horrifying.

Much to Stephen King’s delight, the creepily curious can visit Brown Pet Cemetery, minutes away from John Glenn International Airport. The cemetery was first established before World War II and is the final resting place for a variety of beloved companions, including a tombstone marking two ducks.

Many of the headstones are elaborate and include pictures of the beloved furry friends. Although surrounded by the noise of incoming planes, the cemetery is a peaceful tribute to animals who have gone before us.

On second thought, you may want to bring your tissues to this one. The concept of little ghost ducks is actually super sad.

State of Ohio Asylum for the Insane Cemetery

Located behind a government building, close to a Columbus Police Station, the State of Ohio Asylum for the Insane Cemetery is hidden from the main road. The cemetery, although inactive, is well kept with trim grass and multiple headstones. Only some of the graves bare names, while others have numbers.

Although there are three cemeteries in the Columbus area that serve as the resting place for the deceased who previously occupied Ohio’s Psychiatric Hospital, this location (nestled behind 2130 West Broad Street) is the largest. Since the cemetery is slightly hidden from view, it is recommended that visitors go during the daytime and bring along a friend. When it comes to touring cemeteries, always remember: safety first!

Perhaps the most kid-friendly on the list, the Central Ohio Fire Museum & Learning Center For is a quirky and educational ode to the city’s firefighters. Filled with former fire equipment, many say the building is also home to ghosts of firehouse horses who used to pull the fire engines. Besides the tapping of phantom hooves, visitors may also hear from Captain George Dukeman (affectionately called Captain D). A happy spirit, Captain D likes to make sure the museum is running up to snuff and takes delight in messing with doors, lights and some of the children’s displays.

(Pro tip: If you pass the museum at night and look for BOOTS through the window – his smiling face in the moonlight may be the most perturbing sight of all. Unless a giant humanoid mouse wearing clothes is comforting to you. Then, by all means, enjoy.)

Jordan Abbruzzese is a freelance writer who spends her time watching 90s paranormal television shows, getting emotional over Muppets, and trying to keep her plants alive.