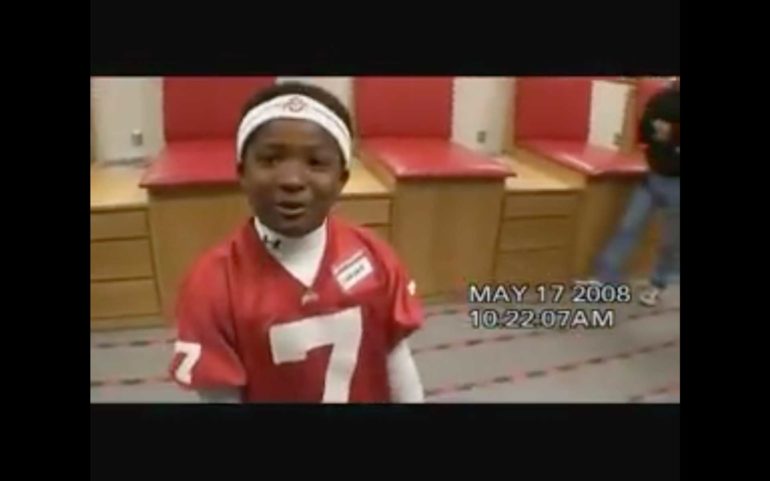 And he didn’t stop fighting until he had won the game for the Buckeyes. Haskins, a redshirt freshman got called into the game after senior QB JT Barrett injured his knee.

The Buckeyes took home the win with the final score of 31-20. Haskins helped secure the sixth consecutive win against Michigan for the team.

Haskins is the kind of QB Ohio State has always loved. He can run the ball and throw it. The QB grew up in the Washington D.C. area, but he’s wanted to be the quarterback at Ohio State since he was a little kid.

I don’t know about you, but when I was 9-11 years old, I certainly didn’t know what I wanted to be when I grew up and I wasn’t actively working towards it.

It feels like fate for Haskins, right? Countless kids have stood in Ohio State Football camps and declared the same, that they want to play football for the Buckeyes. But it wasn’t fate that led up to that moment in the OSU vs. Michigan game when Haskins got called up. It was years of hard work, determination, sweat, and tears.

With JT Barrett feeling better, Haskins may not get the opportunity to play much in the Big Ten Championship game against Wisconsin this weekend. But his victory over that team up north is enough to have Buckeye fans singing his praises.

#DwayneHaskinsJr is ❌VP of the game, hands down! Time to celebrate!! #OSUvs❌ICH

THIS IS WHERE LEGENDS ARE MADE!#DWAYNEHASKINSJR! 🙌🏽

Next season, Haskins will be leading the team, and I’ve got to say, it’s looking like a bright future.