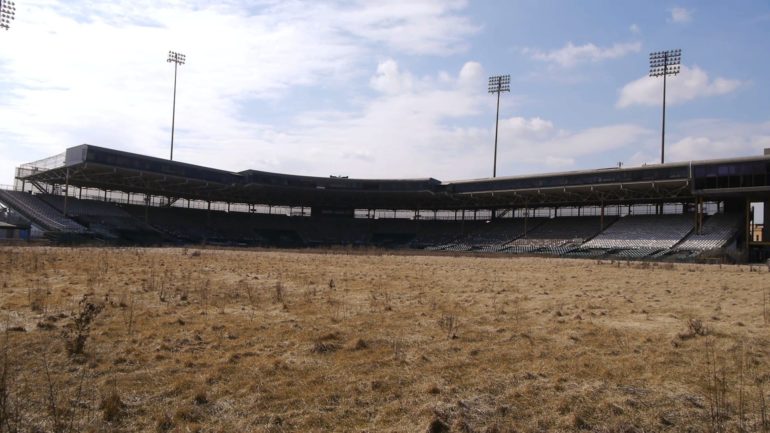 6 Ridiculous Things We Could Do With Cooper Stadium

Cooper Stadium has been sitting empty for years.

The Clippers made the move downtown in 2009, and Cooper Stadium has been deteriorating ever since. The stadium was purchased by Arshot Investment Corporation, who announced that they would develop the space into SPARC, the Sports Pavillion and Automotive Research Center.

The facility was supposed to include a half-mile paved race/test track, with grandstand seating and technology test centers. But that plan has long-since died. Last year, Arshot was reportedly considering repurposing the stadium into “creative office spaces,” but so far, nothing.

So naturally, I’ve started daydreaming. If Cooper Stadium is going to sit empty and not become a super-cool, high-tech race track facility, here are 6 ridiculous things that could make Cooper Stadium the most happening place in town.

Can’t you just see it now? A Columbus-themed  Theme Park. A ferris wheel where the buckets are inspired by OSU football helmets. A roller coaster based off the latest Arnold Schwarzenegger action film. Or maybe our very own Epcot style World Showcase, with every neighborhood and their best breweries represented. It may not be as high-tech as SPARC, but you’d go and you know it.

Cooper Stadium hosted a fair share of concerts back in the day, so let’s go bigger and better. With our imaginary unlimited budget, we’ll add tons of seating, fancy VIP boxes, and a high-tech laser lighting system fit for Beyoncé. Before you know it, they’ll be begging to hold the Grammy’s here.

You know everyone misses the old Santa Maria that used to sit in the Scioto River near COSI. So we’ll bring it back, bigger and better. Think of one of those crazy swinging ship rides at King’s Island and then multiply it. I’m talking a gravity-defying, scare-inducing, massive pendulum inspired Santa Maria. Also, because we can… Dinosaurs. I’m sure at some point dinosaurs used to swim in the waterways of Ohio, so they’re in. I’m picturing a lazy river with a dinosaur surprise. While we’re at it, we should also make the tallest water slide a tribute to my favorite Columbusite, R. L. Stine. Can’t you just hear the children screaming now?

This one is special for my friend/fellow Columbus writer, Zoey Miller. It’s his dream to have a Mega Battle Bots Arena, and in this magical world where we get to do whatever we want, I’m willing to do that for him. Columbus will become the robot fighting capital of the world, we’ll generate tons of revenue, and then eventually be the epicenter of the robot uprising. It would still be better than looking at an abandoned baseball stadium.

Picture this. You’re zooming around a track in a hovercar, wind blowing in your hair when all of a sudden- BAM! Your best friend slams into you at full force in their bumper hovercar, sending you spinning across the track. Don’t worry, if you fall out, there’s a supersized foam pit beneath you where the baseball diamond used to be. The old grandstand is filled with a virtual reality arcade. Obviously, the entire park is Medieval Times Themed, including bumper car hover jousting. Obviously.

This idea isn’t decadent or extreme. It’s just happy. Step 1.) We refurbish the stadium and make it puppy friendly. 2.) We bring puppies there. 3.) We let them play baseball, or realistically, whatever they want because they’re puppies and they are adorable. It’s a no-brainer.

In all honesty, we don’t really care what they do with Cooper Stadium, but we do care that they do something. The Arshot Investment Corporation made a commitment to this city and they should honor it. The space has been sitting empty for way too long, and if their Race Track idea or boring office spaces aren’t working out, we’ve given them plenty of totally-viable options.