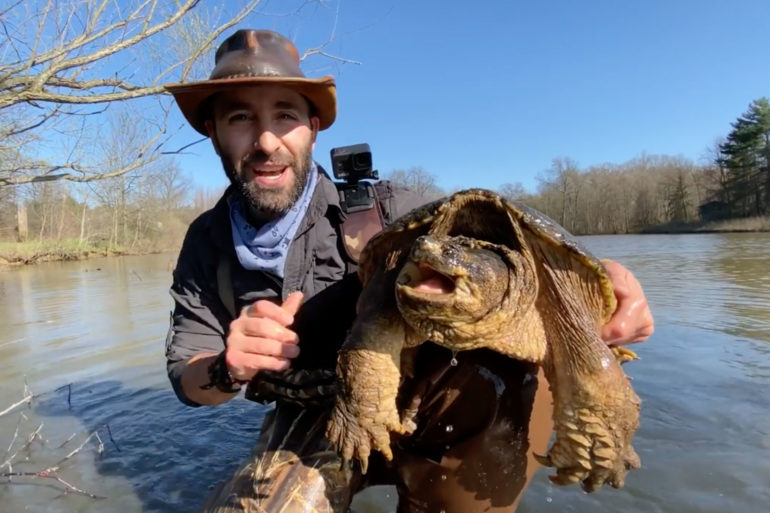 Columbus and Franklin County Metro Parks have teamed up with Coyote Peterson to explore the wildlife that calls our metro parks home.

Peterson got his start on Youtube, creating content showcasing the power of stings and bites of some of the world’s most intense animals. Now, he has his own show on Animal Planet called Brave the Wild.

Peterson is a Buckeye through and through, graduating from The Ohio State University back in 2004. The turtle population, as well as other wildlife, is protected within the Metro Park system and Peterson will be monitoring the population and their health.

The first video from the Metro Parks features Hubert, a resident snapping turtle at Blendon Woods Metro Park. He’s around 25 years of age and according to Metro Parks, he’s always a bit grumpy. Currently he weighs 34.5 pounds but as he feeds on fish, tadpoles, frogs and other small creatures throughout the summer he will bulk up and reach his top weight of 40 pounds.

During the video, Coyote mentions that the Metro Parks are home to some of the largest snapping turtles on record in the United States, and I find that fact a little mindblowing. I tend to think of the waters of Ohio as a relatively safe place to splash around. But knowing there could be a 40 pound turtle with the ability to clamp down on my extremities has me rethinking the creeking I did as a kid.

If you’re wondering what a snapping turtle bite looks like, Peterson is no stranger to their chomps. In his work studying snapping turtles, he’s had a few painful bites, but none moresoe than when the tip of his thumb was nearly bit off a few years ago.