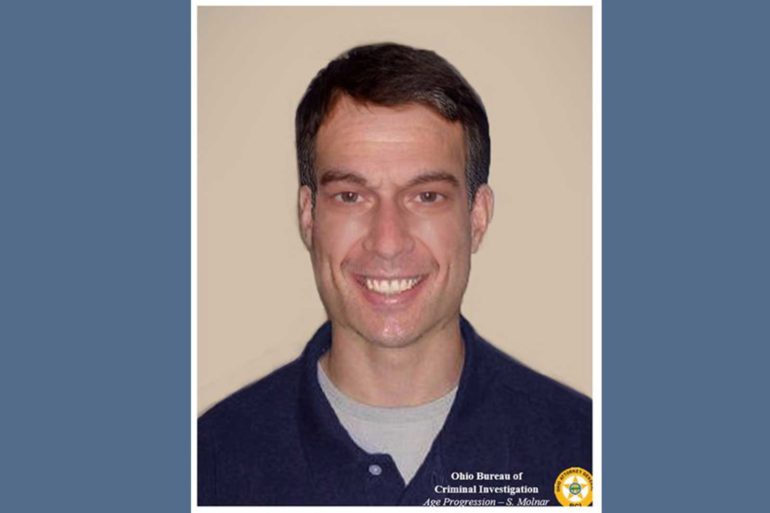 An age progression showing what Brian Shaffer may look like now, at age 42. Courtesy of the Ohio Attorney General

The Ohio Attorney General’s Bureau of Criminal Investigation and the Columbus Division of Police today released an age-progression image of Brian Shaffer, a missing central Ohio man, and are seeking the public’s assistance with the case.

“Take a close look at this image: a single tip can reignite a cold case and bring a family closer to reunification with a loved one,” Attorney General Dave Yost said. “Hope doesn’t have an expiration date – every missing person counts.”

Shaffer has been missing since April 1, 2006. He was last seen at approximately 2 a.m. at a bar near the Ohio State University Campus in the vicinity of N. High Street in Columbus.

Help locate Brian Shaffer, missing since April 1, 2006. Brian was last seen in the vicinity of N. High St. in Columbus. A BCI forensic artist developed the age-progressed image of what Brian may look like now. Submit tips to @ColumbusPolice at 614-645-2358. #MissingPerson pic.twitter.com/HsUb5z1vrb

On March 31, 2006 classes at OSU ended for spring break. Brian and his father, Randy Shaffer, went out for dinner to celebrate the occasion. His dad noticed that Brian seemed exhausted from cramming for exams and didn’t think that Brian should go out with friends that night, but Randy didn’t say anything to him. At 9 p.m., Brian met his friend, William Florence at the Ugly Tuna Saloona, which was then located on North High Street in the South Campus Gateway complex.

An hour after that, Brian called his girlfriend, Alexis Waggoner, who had gone back home to Toledo before the couple was expected to leave on a trip to Miami. According to Florence, he and Brian went bar-hopping, working their way toward the Arena District.

After midnight, the pair met Meredith Reed in the Short North. They headed back to Ugly Tuna for a last round. While there, Brian separated from Florence and Reed. They repeatedly called him and tried to find him, ultimately waiting outside the bar once it closed at 2 a.m. When he wasn’t among the ground, they assumed that he had gone home without letting them know.

The last time Brian was seen on cameras, he was at the top of the escalator talking with two girls outside of the Ugly Tuna. He appears to say ‘bye’ and turns towards the bar, he then disappears from the camera’s view and has not been seen since.

Brian’s girlfriend and his father both tried to call Brian later that weekend, but he didn’t answer. On Monday morning, he missed the flight to Miami for the planned trip with Waggoner. It was then that he was reported missing to the police.

Shaffer was 27 years old when he went missing and would now be 42. BCI’s forensic criminal artist has constructed an age-progressed image of what Brian may look like now. Investigators hope that the new image may prompt the public to submit tips to law enforcement.

“We would like to thank BCI and their forensic artists who worked tirelessly on the age-progression image of Brian Shaffer,” Interim Columbus Police Chief Michael Woods said. “We would like to find every person from our missing persons cases and believe this is another step in hopes that we can find Mr. Shaffer.”

Anyone with information about the case is asked to call the Columbus Division of Police at 614-645-2358.

Shaffer was last seen wearing jeans, a blue or green striped shirt and tennis shoes. A white male, Brian is 6’2” tall, weighed 170 pounds and has brown hair and hazel eyes.