Blackhand Gorge State Nature Preserve Is An Amazing, Ancient Place Worth A Visit 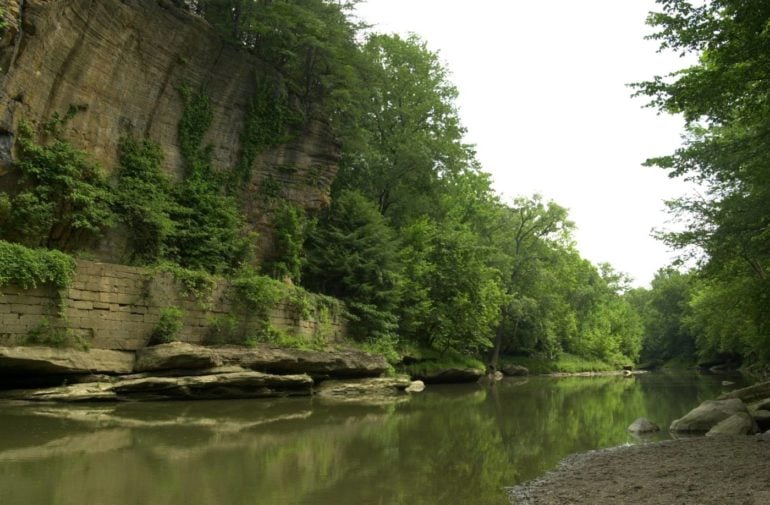 Break out your hiking boots, because I have an adventure for you.

Even though I’ve lived in Ohio for the majority of my life, I still find myself impressed with the natural beauty throughout the state. Blackhand Gorge State Nature Preserve in Licking County comes to mind whenever someone asks me about an underrated place in central Ohio and for good reason. It’s freaking jaw-dropping.

Blackhand Gorge is a scene straight out of Middle Earth. The Licking River cuts through a four-mile-long sandstone formation and it feels ancient and otherworldly. Thousands of years ago, early Native Americans lived in the area and visited the gorge. As the world changed, the importance of the gorge changed as well.

Starting in the early 19th century, Anglo-European settlers began using the gorge as a transportation route, from canal boats to steam railroads to automobiles.

The Blackhand Gorge was named after the Black Hand, a prehistoric petroglyph in the shape of a black hand with spread fingers and part of a wrist. One elongated finger supposedly pointed towards a nearby Indian mound. Petroglyphs are a form of rock art, typically associated with prehistoric peoples, in which the image is carved, cut, chiseled, or pecked into the rock. There are several well-known petroglyphs throughout Ohio, including the Leo Petroglyphs in Ray, OH.

Sadly, the rocks holding the Blackhand petroglyph, as well as many other petroglyphs at the site, were destroyed in 1828 while the Ohio and Erie Canal was being built. Many of the petroglyphs were ultimately recorded by two Newark men, Dr. James Salisbury and his brother Charles.

For the best views, you should hike the full Blackhand Trail, which is 4.6 miles long. There are plenty of shorter trails though if you’re in a rush or want to take it easier. If you’re bringing your dog with you (which you totally should because they’re a good pup and they deserve it) then they will only be permitted on the paved Blackhand Trail. No wandering off, my friends! The preserve is open daily, from dawn till dusk and is located at 2200 Gratiot Rd SE, Heath, OH 43056.

Please observe social distancing guidelines while hiking at State Parks and Nature Preserves this summer. For more information, you can visit the Ohio Department of Natural Resources website.