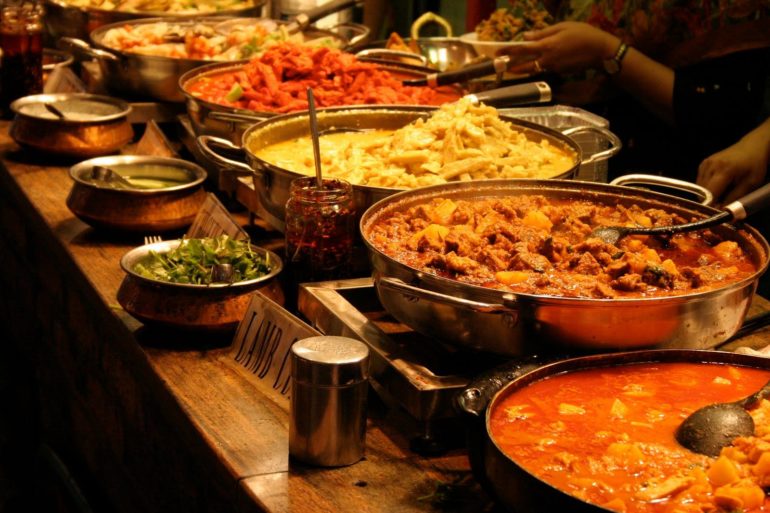 The 9 Most Banging Buffets In All Of Columbus

Aw, the buffet, that age old tradition of lust and gluttony. Deriving from the French word meaning bloated walrus song (it is, look it up), buffets have helped many of Americans put up with their insane relatives during family outings. Is cousin Gus going on his usual diatribe about FEMA death camps and chemtrail exposure? Now’s a good time to reload on the mashed potatoes. Are your parents passing around photos of your nieces and nephews while dropping unsubtle judgments about how you haven’t produced any offspring and may have actually used the term “unmarriable” in reference to your dating life? Hey, at least you’ve got unlimited meats and starches to drown away the tears and that ain’t bad.

Yes, the buffet has done so much for us over the years. From family functions, to work lunches, and even curing our hangovers, everyone appreciates a good buffet now and then. We scouted the city and asked around for the best spreads and smorgasbords on either side of the outer belt. So here you go Columbus, the best buffets the city has to offer. Don’t skimp out on seconds, go on, you deserve it. Oh, and ‘buffet’ definitely doesn’t originate from ‘bloated walrus song’ but if I can get at least one person to actually Google that I’ll die happy.

Schmidt’s is practically a local German dynasty, making authentic European sausages for over 90 years. So popular is the sausage house that it’s been frequented by the legendary Governator, Arnold Schwarzenegger himself.
Buffet Hours: 11 a.m. to 10 p.m. Sunday through Thursday, 11 a.m. to 11 p.m. Friday and Saturday.
Where:  240 E Kossuth St, Columbus, OH 43206

Named after a fragrant spice common in Indian cuisine, Cumin offers a variety of well seasoned regional dishes. Stuff your face with, not some, but all of the tandoori chicken. Go on. You deserve it.
Buffet Hours: 11 a.m. to 2 p.m. Monday through Friday, 11:30 a.m. to 3 p.m. Saturday and Sunday
Where:  1025 Polaris Pkwy Columbus, OH 43240

Though they only do their brunch early Sundays, it’s never the less a very popular buffet in Columbus. If your idea of a perfect Sunday is hanging out on a beautiful patio enjoying an omelet and a mimosa, then be sure to check out Union. If it isn’t, then you’re obviously a grumperpuss and could use some sunshine-omelet action in your life anyway.
Buffet Hours: 10 a.m. to 2 p.m. Sundays.
Where: 895 N. High St. Columbus, OH 43215

This buffet is unique in that it offers a completely vegetarian menu. Look meat-eaters, just chill for a second. Despite remaining 100% meat free, all their dishes are still flavorful and are sure to be delicious. And with it being all-you-can-eat you’re sure to be fulfilled.
Buffet Hours: 11:30 a.m. to 3 p.m. Monday through Friday.
Where: 2001 E Dublin Granville Rd, Columbus, OH 43229

China Dynasty is considered to be some of the best Chinese food in the city and with 25 years of experience that’s no surprise. Though their buffet is pretty limited to Sundays and holidays, it’s definitely worth checking out. Who knows, you might even start a new Thanksgiving tradition. Much better than dealing with crazy cousin Gus during the holidays, that’s for sure.
Buffet Hours: 11 a.m. Sundays and special holidays.
Where: 1689 West Lane Ave. Upper Arlington, Ohio 43221

Some would argue that Massey’s has some of the best Columbus style pizza in the city (that’s thin crust, edge to edge toppings, and square cut kiddos, keep up). And while they no doubt have some pretty awesome pies, they for sure have one of the best buffets in town. Sometimes there’s nothing better than downing a physically alarming amount of pizza, guzzling a half gallon of Pepsi Cola, and trying to make it home before your blood sugar drops and you pass out on the side of the road. Hey, we all have our own ideas of a good time.
Buffet Hours: 11 a.m. to 2 p.m. Monday through Friday.
Where: Thirteen different locations, click here to find the closest.