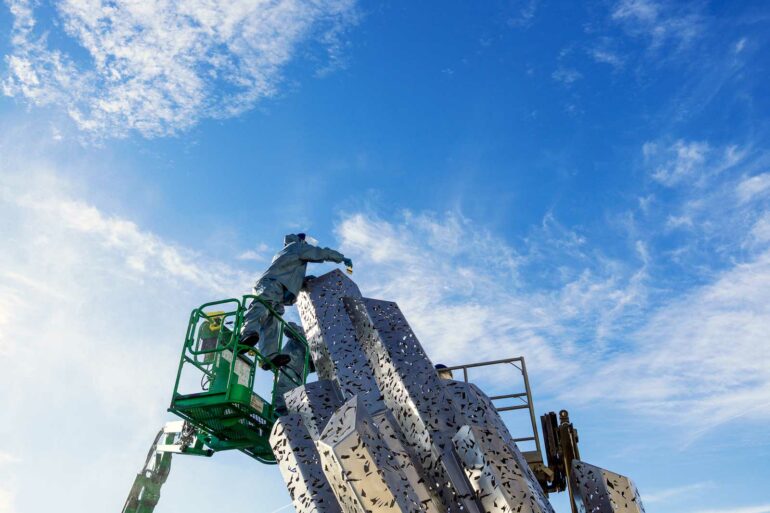 There is a new art installation in the Short North Arts District and it is massive.

The Makers Monument is a new sculpture installation by Ohio-born artist Mark Reigelman. The twenty foot tall crystalline sculpture is inspired by and perforated with shapes of items that have been made in Columbus throughout our city’s history.

“From the region’s indigenous earthworks dating back thousands of years to the sprawling network of navigable canals and railroads developed throughout the 19th century, Columbus’ tradition of making and manufacturing is embedded within the city’s historical and topographical memory,” said Mark Reigelman, who’s now based out of New York.

“At the height of the Industrial Revolution, Columbus was flecked with hundreds of shops and facilities producing everything from toothpicks to locomotives. The towns surrounding Columbus, particularly those referred to as black diamond communities, provided the raw materials and fuel that powered the city to greatness. Situated within this manufacturing epicenter, The Makers Monument memorializes High Street’s position as a maker hub and celebrates the region’s ever-evolving landscape.”

This massive installation is the largest single investment in public art in the City of Columbus’ history. The nearly half a million dollar project was planned in conjunction with the recently completed $35 million renovation of the High Street streetscape in the Short North.

“Artist Mark Reigelman’s, The Makers Monument celebrates the creativity and industriousness of Columbus makers,” said Columbus Mayor Andrew J. Ginther. “It charts a new, inspiring direction for the integration of art and function in City capital projects, bringing art into our daily lives.”

The site has been prepped for the sculpture and the installation process will begin on June 22. While it’s a huge undertaking, the installation is expected to be completed in July. There will be several dedication events hosted by the Short North Alliance during Gallery Hop on Saturday, August 7.

The installation is located at at West Hubbard Avenue and High Street. For more info about the project, you can visit shortnorth.org.