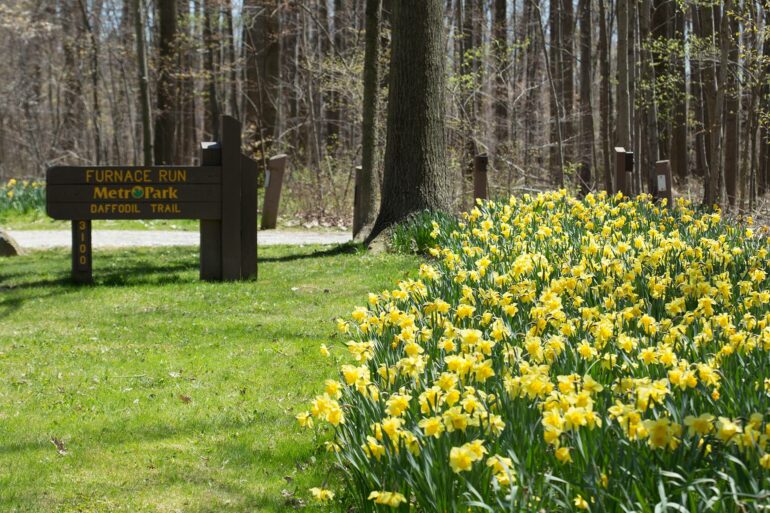 This spring, you’ll want to pencil in a visit to this one-of-a-kind trail in Northeastern Ohio.

Furnace Run Metro Park opened in 1929 when the family of Charles Francis Brush Jr. donated 272 acres to Summit Metro Parks. Much of the park was developed by work relief crews during the 1930s.

Furnace Run stream passes through the peaceful park, and as one of the cleanest tributaries to the Cuyahoga River, it provides a special habitat to many Ohio creatures. But one of the best reasons to visit the park is the tens of thousands of daffodils that bloom there in early spring.

All along the H.S. Wagner Daffodil Trail, visitors can take in roughly 40,000 daffodils. Wagner, the first director-secretary of Metro Parks, owned the land off Brush Road and planted the first bulbs along the trail.

When he retired in 1958, he sold the property to Metro Parks and the land became part of Furnace Run Metro Park. The trail is basic, which means there are no paved or graveled sections, but it’s a short hike at just 8 tenths of a mile.

Throughout the park, visitors will find beech-maple forests, spring wildflowers, and a variety of birds, including owls, hawks, herons, warblers, and waterfowl.

Daffodils begin blooming in March and April. Since it’s a little bit of a road trip, be sure to check out the Summit Metro Parks Facebook before you head out. They post regular updates about the park and will let the public know once the daffodils begin to bloom.

For more info about Furnace Run Metro Park, you can visit summitmetroparks.org.