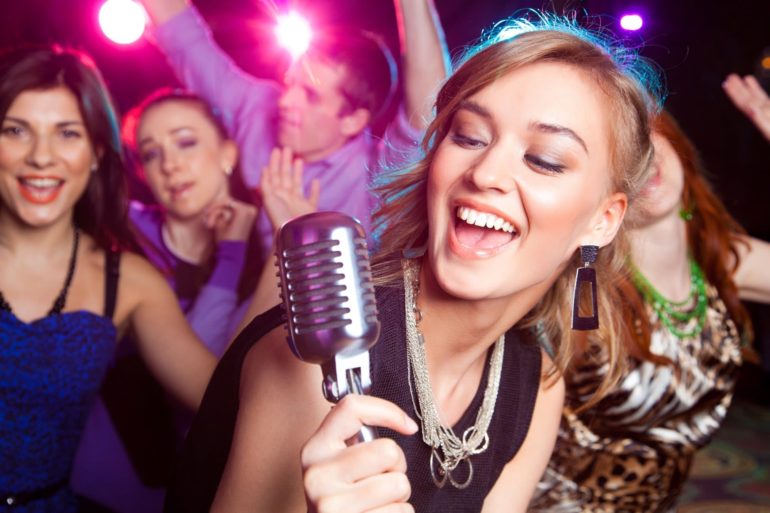 The Most Ridiculous Karaoke Nights Columbus Has To Offer

Warm up those vocal chords and down that whiskey, it’s a perfect night in the city for karaoke.

Columbus, there just isn’t anything like a good karaoke night. The smell of cheap booze and sadness, the awkward but comforting static hiss of microphone feedback, the tacky light spinning from a slowly turning disco ball hung haphazardly above your table. Make no mistake CBus, I live for all that kitschy karaoke stuff. I may not be all that great at it (in fact I’m exceedingly awful, I’m not sure how I ruined Clint Eastwood by Gorillaz so thoroughly but the karaoke DJ wouldn’t let me back up again) but you don’t have to be great at karaoke to love it. Whether you’re a born star, you just need to get some feelings off your chest, or you’re one of those (like me) just there to see humanity in action, karaoke nights are by far the most amusing in our city. So if you’re looking for a spot worth checking out, look no further my friends, here’s out list of the most fun karaoke nights in the city.

This 60s chic bar located in the Short North is hipster-friendly, so if the mood strikes you to belt out a sleep inducing Bon Iver song, hey, no one’s stopping you. I’d personally pay money to see some jean jacket mustachioed man belting out “Skinny Love” off key as he cries into his PBR. GOOD money.
Karaoke Nights: Wednesdays at 9:30 p.m.

This place is one of the diviest of dives which already endears it to my heart, but it also has a fairly popular karaoke night. It doesn’t matter how awful your cover of “Break the Chain” by Fleetwood Mac is (and trust me, mine is terrible) everyone is gonna cheer you on and sing along because they are all beyond trash. Definitely my type of bar.
Karaoke Nights: Wednesday through Sunday, 9:30 p.m. to 2 a.m.

Looking for a karaoke scene with a little more ‘tude? Well, Spacebar’s got you with their Punk Rock Karaoke nights. So go ahead and pick out your favorite PUP tune or belt out a Ramones song. But, and I swear this on all that is angsty, if you unironically choose a Green Day song I will do everything in my power to get you banned for life. I am so sincere (mine is a good and just war).
Karaoke Nights: Mondays at 9 p.m.

This is one of those places that you can’t judge by its cover. Sure, on the outside it may seem pretty bro-ey, but on the inside it’s, you know, only slightly bro-ey. Normally it’s a great place to catch a game of pool or (shudders) watch sports, but they also have a pretty fun karaoke night. Pro-tip: Bros secretly LOVE “My Heart Will Go On” by Celine Dion, not even making it up. Not sure about the science behind it but the facts check out.
Karaoke Nights: Fridays at 9 p.m.

I gotta say, I think the best drink special I’ve ever heard for a karaoke night is a 3 dollar Long Island Ice Tea. Just in case you really wanna get out there and belt one out but you’re too chicken, a nice cheap Long Island will fix that right up with just the right amount of liquid courage. Sure, you might risk having one too many before you go on stage, but it should be more than hilarious for the rest of us.
Karaoke Nights: Wednesdays

Not only does this place have FANTASTIC food, but they also sport a pretty fierce karaoke night as well. You can seriously throw down on the mic and the best part is that the crowds are usually none too bad, giving you a chance for a second helping of soul stuff. So go ahead, sing your heart out. Crush that Michelle Branch song like no one’s watching and then head right back up there to crush it with that Dido song you’ve been practicing in the shower. You’re the star. You deserve it.
Karaoke Nights: Saturday from 9:30 p.m. to 2 a.m.

Club 20 is an intimate little LGBTQ bar located in the Old North. Everyone is super friendly and welcoming, whatever your walk of life may be. You can hear Prince or 4 Non Blondes blaring all the way from the patio on karaoke nights and the drinks are always well priced and, um, “potent”. Yes, let’s go with potent. It doesn’t matter if you can’t stand karaoke, by the end of the night you’re gonna be a) hammered, and 2) so wrapped up in everyone having a good time you might feel some type of way and find yourself singing the Animal’s “House of the Rising Sun”. I dare you to hate on that song. You just can’t.
Karaoke Nights: Tuesdays and Fridays at 10 p.m. with alternating hosts.

Got any embarrassing videos of friends singing karaoke? Send them in. I’m sure we won’t do anything embarrassing with them like blackmail your friends or put them on the internet. Nope. Not at all.