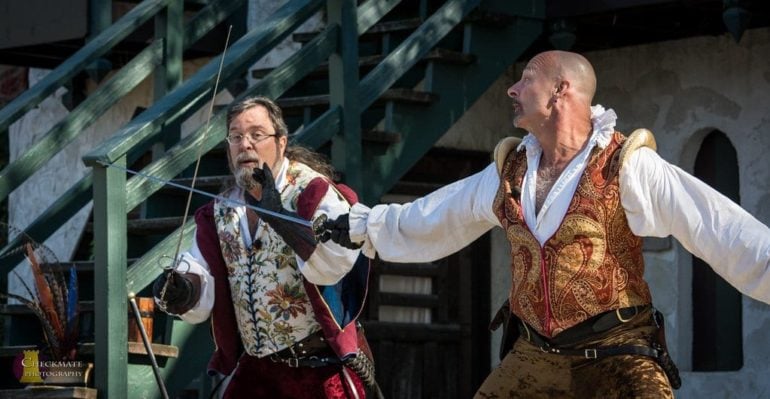 10 Reasons To Be Thrilled That The Renaissance Festival Has Returned

The Ohio Renaissance Festival is back and ready to throw down on some swashbuckling hijinks.

Rejoice all you knaves and maidens! The Ohio Renaissance Festival is upon us once again. The leaves are just about to fall and the temperatures are chilling ever so slightly, setting the perfect backdrop for a pint of mead and a duel in the town’s square.

There’s more than a dragon’s load of things to be excited about for this year’s medieval festivities. We’ve managed to narrow it down to just 10 things that every ren-goer is going to be positively pumped for. So strap on that breast plate and unsheathe thy sword, it’s time to indulge in unapologetic nerdery and cross our fingers there won’t be any photographic evidence (unless it’s awesome in which case haters goin’ hate).

To truly enjoy a renaissance festival you’re gonna need a healthy dosage of imagination juice. That’s booze for those of us unaccustomed to such complicated jargon. Make sure you drink responsibly though, you don’t want to be that middle-aged woman, hammered and passed out on a bail of hay (this isn’t hypothetical here, it’s happened). Or maybe you do, whatever. You’re an adult, you can make your own decisions.

Yes! This is what we’re all looking forward to. Parading around the festival, gigantic turkey leg in each hand, a sword at your waist, and an unadulterated grin from ear to ear. But it doesn’t just stop there, the Ohio Renaissance Festival has a ton of different foods to choose from. Let yourself go, after all, this is a time when gout was caused by mischievous pixies and no one had any notion of what cholesterol even was. Aw, to be blissful in ignorance.

People really go all out with their costumes and regalia. You don’t want to be that sucker who shows up in an Ohio State hoodie while everyone else is rocking some spiffy leather duds. What? You can go to a renaissance fair but suddenly you’re too cool to dress the part? Go on, you know you want to. But I swear to god, If I see more than three poorly dressed Jon Snow look-a-likes, I am just going to lose it. Medieval high fantasy existed before Game of Thrones, I’m going to need to see some effort folks.

An Irresponsible Amount Of Bladed Weaponry

That’s right Cochise. You want weapons? They’ve got weapons. With more knives and maces than you can shake a goblins shin bone at. You’d think someone would question the sanity of having a bunch of swords and axes around so many drunk people and children. But no, this is America. And even better, it’s medieval America, suckers.

Because, no, a renaissance fair in the middle of Ohio isn’t nerdy enough, we need to throw in some Doctor Who for true Comic-Book-Guy-From-The-Simpsons nerdery. Don’t scoff, the costumes get pretty awesome, and let’s not pretend that we all don’t dig on everyone’s favorite British time traveler. I mean I don’t, but then again I have a social life. Read: BURN (just joking, trust me, I do plenty of other dumb nerdy stuff).

The Ohio Renaissance Festival practically doubles as an outdoor flea market. There are dozens of merchants and vendors peddling anything from weapons (yuhs!), clothes, jewelry, and various other trinkets and crafts. Everything’s handmade and meets the required criteria for the period. Trust me, you’re sure to find some unique and quality merch’ here.

Every year they have these weird but awesome rides. Dragon contraptions and a giant boat thingy that’s a heck of a lot more fun than you think. They’re not just for kids, they’re also for super drunk adults who have eaten more than their fair share of turkey legs and non-period hamburgers. Uh, on second thought, maybe wait a while before you decide to conquer the rides there Don Quixote.

If you’ve had your fill of wandering around aimlessly with a mug of mead and a leg of turkey (like, how can you though?), take a load off at the Mudde or Naughty Bawdy Pub Show. Mudde presents classic tales with a messy twist, free to the public. For the Bawdy, fifteen dollars gets you admittance into the show, two beers, ciders, or wine cocktails, and a commemorative pin. Enjoy a show of jokes, songs, and limericks. It’s kind of like a Medieval 8 mile except, you know, not at all.

When you walk into the jousting arena your initial thought is disbelief. There’s no way they can actually allow two dudes on horses to collide into each other with blunt sticks made of- HOLY CRAP THEY TOTALLY DO. As soon as you hear that loud crack and see that punk black knight topple from his horse, you’re hooked. How jousting isn’t a regular on the ESPN circuit is beyond me. If I can turn on Sports Center and see Sir Gregor talking smack to Lord Seigfried The Illustrious, they’re going to have a dedicated viewer for life. That’s straight talk.

Romanticizing A Pretty Terrible Time In History To Be Alive

Let’s be honest, part of the fun of the renaissance festival is getting to enjoy all of the primal awesomeness of an awful period in history and still being able to enjoy indoor plumbing at the end of the day. You get to eat all the turkey legs and drink all the mead that you want without the crippling subjugation of a ruling aristocracy. That is unless you actually take the time to look at current economic disparities and the undiscussed issue of American dynastic poverty. Too real? Sorry, I do that.

The Ohio Renaissance Festival Kicks off this weekend on August 31. For more info, or to snag some tickets, click here.