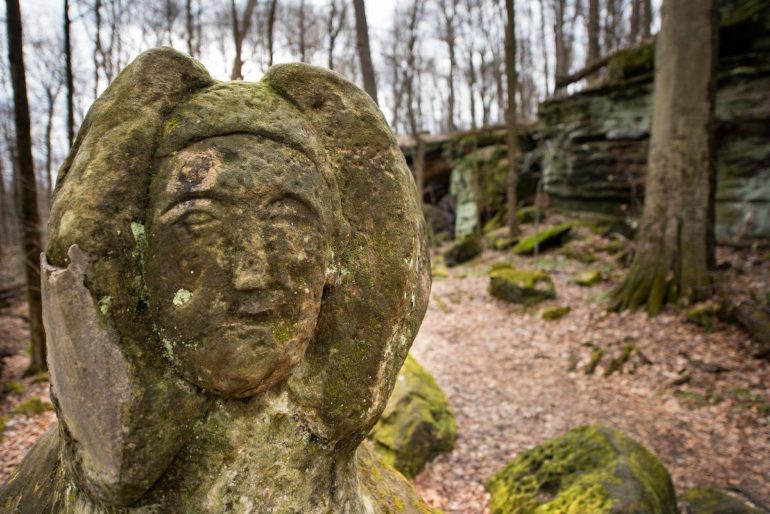 Ohio is full of interesting places to visit.

From jaw-dropping waterfalls to quirky castles, there are remarkable things to do and see around every corner.

But none capture the imagination quite like Worden’s Ledges, a one-of-a-kind nature experience in Cleveland. At the end of a short (but beautiful) trail, visitors will find huge, sandstone outcroppings. While the stones themselves are quite a sight, hikers are drawn to the area for the figures carved into the stones.

The ledges are absolutely magical. If you find yourself feeling like you’ve been suddenly transported through time, you wouldn’t be the first. Some of the carvings are covered in moss, giving off an ethereal and ancient vibe, even though they aren’t nearly that old.

The mysterious figures are the work of Noble Stuart, son-in-law to Hiram Worden, who owned the land the ledges sit upon. Stuart began carving the rocks in the 1940s, and thank goodness he did, because they’re marvelous. In addition to the somewhat haunting faces of George Washington and Thomas Jefferson carved into the stone, you’ll also see a depiction of a schooner, a cross and bible, a sphinx, a pirate ship, and more.

The different carvings represent things of importance to Stuart. The bible and cross were carved for his wife Nettie, who was so devout that she only left the family estate to attend church while the schooner was carved for Stuart’s father.

The Worden’s Ledges Loop Trail is approximately 0.7 miles long. It’s an easy hike back to the carvings, but appropriate footwear is highly encouraged. The trail is located in Hinckley Reservation, which is open daily from 6 a.m. to 11 p.m.