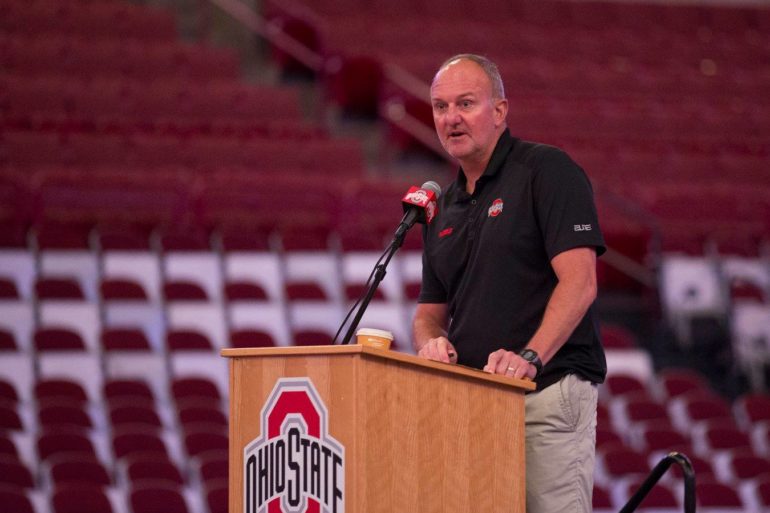 Matta has been the head basketball at OSU since 2004.

The nationwide search will begin to replace Matta today.

“While this may be a surprise to many, I think it’s the right thing for our program at the right time,” said Smith.

“We feel that we’re fortunate to have him as our basketball coach for so long.”

With tears in his eyes, Matta spoke to the press this afternoon.

“There’s a great song that says sometimes the light shines brightly on me, other times I can barely see. Lately, it occurs to me what a long strange trip it’s been,” said Coach Matta.

“Obviously, this has been, probably, the greatest 13 years of my life. Looking around here, and seeing all these things that the guys have been able to accomplish has been awesome. From Gene to Dr. Drake to Dr. Gee, to Andy Geiger, it’s been an incredible run.”

Matta expressed his gratitude for the many people involved in running the Ohio State Men’s Basketball department, from employees at the Schottenstein Center to administrative staff. But none got a more heartfelt thanks than his players.

“Most importantly I wanna thank the players,” said Matta. “And damn, we’ve had some good ones. Those are the guys that get the job done for you, and I’m grateful to them.”

Man, words can't describe what Coach meant to me and the program! Wouldn't have wanted to play for anyone else! pic.twitter.com/JmkQtJ8CcW

When asked what he hoped Buckeye fans would remember most about him, he replied, “I hope, number one, remembered as a good person. A guy who cared about the university, who cared about his players. I think that’s most important to me.”

“The wins, the losses, they come. The last thing that I hope I’m always remembered for, is that we always did it the right way.”