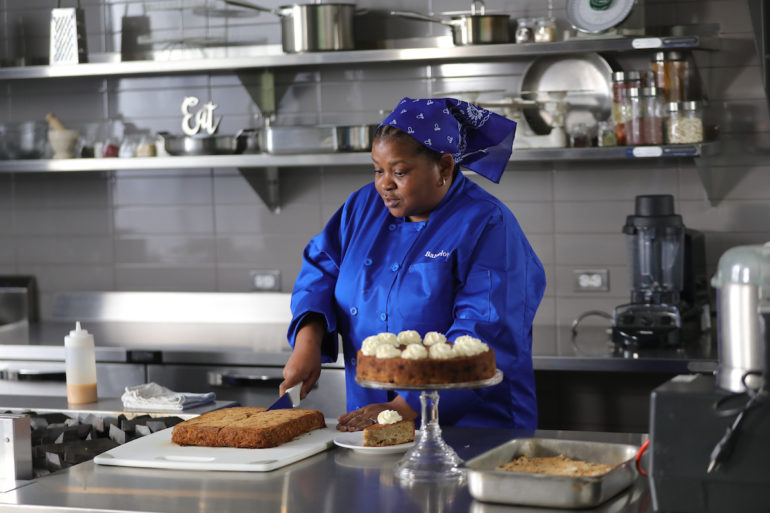 💸 This post is sponsored by Columbus State Community College. But rest assured, all thoughts and opinions contained within are genuine and our own. 👍🏼

Taste the Future is a delicious event that I look forward to every year.

Put on by Columbus State Community College, Taste the Future has been reimagined this year. As a virtual event, Taste the Future will feature mouthwatering dishes, inventive chefs, and refreshing beverages. On October 13th at 7 p.m. guests can gather virtually for Taste the Future: Reimagined.

One of the chefs being featured at this year’s event is Chef Sheila Stewart. While Chef Sheila is usually making magic in the kitchen at Barcelona, she’ll be sharing some fantastic dishes through Taste the Future.

After her mother passed away in 2012, Sheila was inspired to finally go after what she wanted: a career as a chef. She took her dreams to Columbus State where she enrolled in the culinary program. While at school, she took every opportunity given to her to hone her craft.

Sheila graduated from Columbus State with honors and she’s been actively pursuing her dreams ever since. Working as a woman of color in the food industry isn’t exactly easy, but Sheila believes that pushing into a male-dominated industry is worth it.

“It is a male-dominated world. I’m the only female in our kitchen,” said Stewart. As for her advice for her fellow female chefs? Keep trying. “It’s a little harder to gain respect, but just keep pushing, because us women are coming up,” she said.

In addition to Sheila, chefs from Cameron Mitchell Restaurants, Blend Bakery & Cafe, and Degrees restaurant will all be involved, offering participants the chance to cook along with them from home. Service Bar will be giving a craft cocktail demonstration and there will also be a guide to menu-paired wines from Heidelberg Distributing Company.

The event will be an hour-long and at the grand finale, a winner will be chosen to receive a private dinner for eight at Columbus State’s Degrees Restaurant. Having eaten there myself, I feel like I have to tell you to order the cheddar biscuit appetizer. You won’t regret it.

Tickets for Taste the Future: Reimagined are on sale now. You can snag yours by visiting their website here.