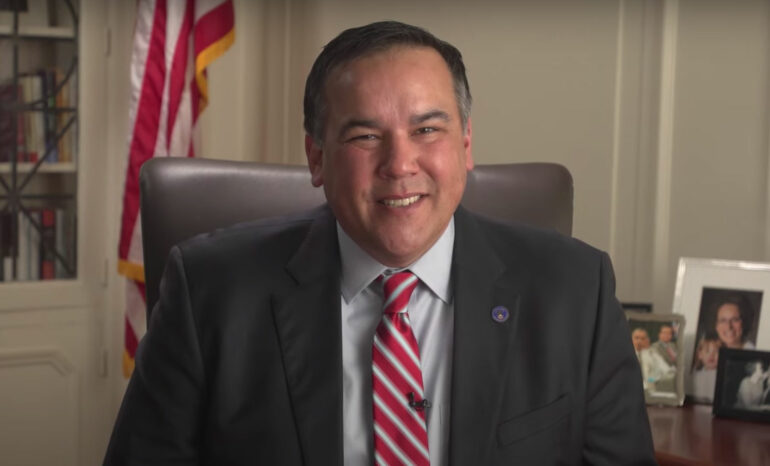 Mayor Ginther addressed Columbus in the annual State of The City speech on Tuesday.

The hour-long speech laid out the Mayor’s plan for Columbus this year, as well as highlighting some of the policy triumphs that have led to this point. For the first time, the address was produced professionally, including segments featuring Columbus residents.

Throughout the speech, Mayor Ginther focused on a few main topics: public safety, affordable housing, gun violence, clean energy, and more. We’ve rounded up a few important moments from the speech, but anyone interested in watching the speech in its entirety can do so above.

“We need more homes at every price point and nowhere is this pressure felt more acutely than those who need access to housing that they can afford right now,” Ginther said. “To kick off this effort I’m committed to placing another bond package before Columbus voters this November, with at least $150 million going toward the expansion of affordable housing in our city,” he said.

“I have declared gun violence a public health crisis and called upon our Health Commissioner, Dr. Mysheika Roberts, to work with other city departments to make sure that we have a holistic approach for dealing with it,” said Ginther. “However, we cannot ignore the effect of governors, legislatures and courts who have repeatedly tied our city’s hands, limited our ability to determine our own destiny, and stood in our way as we seek to protect those we are entrusted to serve.”

On Public Safety:
“The violence is unacceptable, and it must stop, which is why we are devoting more than $660 million toward community safety in this year’s operating budget – the largest investment of its kind in city history,” said Ginther. “This includes funding for three new Police recruit classes this year, which will graduate 170 officers. I am proud to have fought for the addition of a third police class – allowing us to bring in more officers committed to change and reform, and further grow the diversity of our safety forces.”

“We will continue to pursue other reforms that advance community safety. Many of these reforms aim to restore trust and the vital flow of information between our officers and the public, and they do so by enhancing accountability and transparency across the Division of Police,” said Ginther.

You can read the full State of the City address right here.