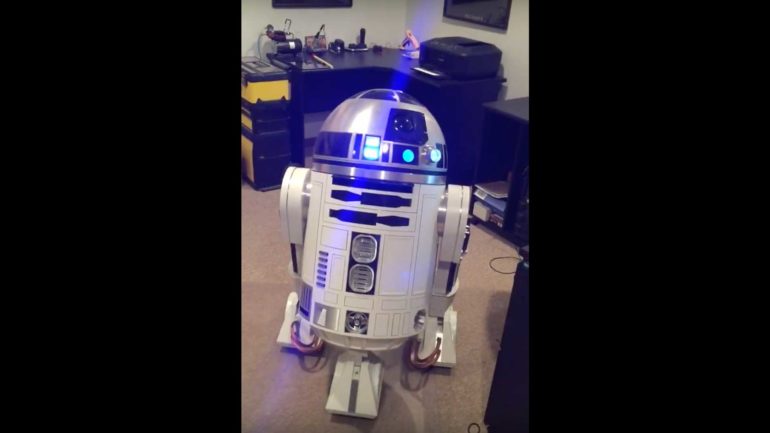 When it comes to any fandom, there is a sliding scale of dedication.

When it comes to Star Wars, fans are often on a whole other level. And in a galaxy far, far, away (okay, not really, just Greenfield, OH) a fan finally achieved a goal: To build his own, working R2D2.

Josh Montgomery is a computer science teacher at Southern State Community College and the Director of Technology for Chillicothe Schools.

“I’m big into different kind of projects and I wanted to get into something with robotics,” Montgomery told the Chillicothe Gazette. “Being a ‘Star Wars’ fan, it just makes a lot of sense — build R2D2. Can I build R2D2?”

Spoiler alert: he can and he did.

Montgomery watched YouTube videos of other people making their own versions of the droid, then spent two and a half years building his R2D2 unit. He chose to make the 1977 film version because of material choices.

“It was the only time they did a steel build, the rest were either digital or cast in fiberglass or plastic in the films,” said Montgomery.

This incarnation of R2D2 is controlled with two video controllers, which allow him to move R2 in different directions, as well as control his “head”. The robot wasn’t cheap to build, but it was something Montgomery really wanted to do.

Montgomery used 3D blueprints from Lucas Films and reached out to local fabricators for help with creating the body. As for the tech work, that’s all Montgomery and his knowledge of computer science.

“A lot of failures some of the painting processes went wrong the robotic process went wrong the feet took me forever,” Montgomery told 10TV. But in the end, it was worth it.

Awesome job, Josh! May the force be with you.