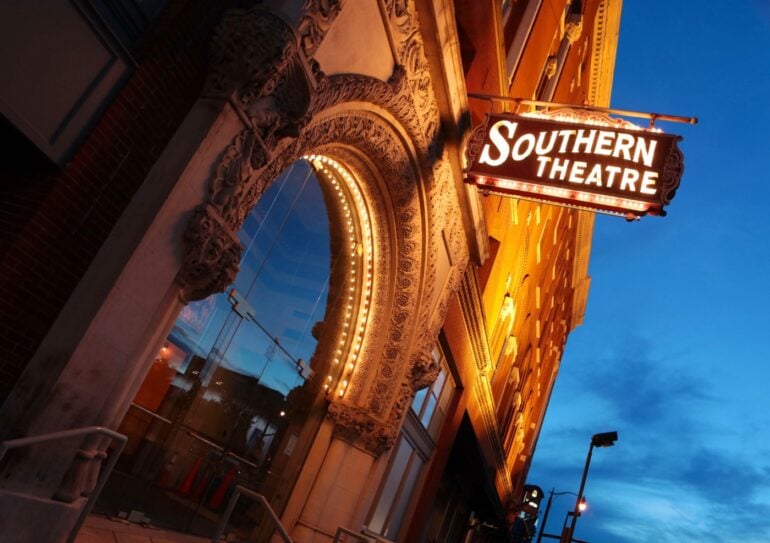 The historic Southern Theatre is turning 125 this year.

CAPA is offering a free open house on Sunday, September 26 from 1 p.m. to 4 p.m. for guests interested in seeing the workings of the theatre. Listed on the National Register of Historic Places, the Southern Theatre opened on September 21, 1896. It’s the oldest existing theatre in Columbus and the only remaining double-balcony theatre.

During the event, The Southern will be open for self-guided tours that will offer access to the stage, dressing rooms, orchestra pit, and fly loft. While guests are walking around, they can approach local docents who will be stationed throughout to offer historical information and lesser-known facts about the iconic venue.

Admission to the event is free and masks will be required for attendees. It should be noted that the self-guided tours will include stairs.

The Southern Theatre opened on September 1896, two years after the creation of “Broadway” in New York. On opening day, the Broadway touring production of In Gay New York was the main event. After, some of the country’s most influential performers took to the stage at the Southern, including actors W.C. Fields, Sarah Bernhardt, and Ethel, John, and Lionel Barrymore; musicians Victor Herbert, Al Jolson, and George M. Cohan; and dancers Isadora Duncan and Anna Pavlova.

Nearly twenty years later, the Southern was fitted with a screen for silent films and by 1931, the theatre was showing first-run motion pictures. With the rising popularity of television in the 1950s and 60s, the Southern saw a decrease in their audience. After a brief run at “beach blanket” movies and Kung Fu films, the Southern Theatre closed in 1979.

In the 1980s, local developers purchased the Great Southern Hotel and Theatre to renovate the hotel. The theatre was gifted to CAPA and after a $10 million restoration, the Southern Theatre reopened in September 1998. Today, the theatre is home to Opera Columbus, the Columbus Jazz Orchestra, Chamber Music Columbus, and the ProMusica Chamber Orchestra.