💸 This post is sponsored by Sonic Temple Festival. But rest assured, all thoughts and opinions contained within are genuine and our own. 👍🏼

The dulcet tones of rock and roll’s finest will once again return to Mapfre Stadium.

Sonic Temple is back for another year, with the festival running May 15-17. When the festival launched last year, breaking away from it’s Rock on the Range roots and aiming to be more inclusive, fans weren’t sure to expect.

The festival aimed to add a wider variety of rock artists, as well as comedians, art installations, and local food. The changes made sense to Sonic Temple creators, Danny Wimmer Presents.

“At the core, Sonic Temple is a rock festival. But we want to be more,” said Executive Vice President of Danny Wimmer Presents, Gary Spivack, last year. “We just want to cast a wider net and have this more full spectrum of rock and not just be one thing. As long as the energy and the attitude and the vibe is there, that’s rock and roll.”

Sonic Temple brought people together for a sold-out weekend of rock and roll magic. The festival was largely a success, although they did have some weather issues to contend with (a familiar problem from Rock on the Range). Any festival-going veteran will tell you that nothing kills a good vibe faster than rain and lighting. Although the stadium was forced to evacuate, some good did come of it. Refused and the Distillers ended up playing an impromptu show at Ace of Cups, offering concert-goers a once in a lifetime chance to see two great bands in an incredibly intimate setting.

This year, the festival was due to be bookended by Metallica, but due to the health and recovery efforts of James Hetfield, Metallica has to cancel their headlining performances at this year’s Sonic Temple Art + Music Festival.

“It pains me to write this, but I have to let all of you know that I cannot make it to Sonic Temple in Columbus and Louder Than Life in Louisville this year,” wrote James Hetfield in a statement to fans. “My intent with this statement is saying ‘I apologize’ to each one of you. The reality is that I have not prioritized my health in the past year of touring and I now know that my mental health comes first. That might sound like a no-brainer for most of you but I didn’t want to let the Metallica team/family down and, I alone, completely compromised myself.”

In the wake of the news, Sonic Temple Festival announced that Sonic Temple and Louder Than Life pass holders who would like to exchange their passes to see Metallica at another Danny Wimmer Presents festival, or would like to receive a refund, will be able to do so starting this Friday, February 28. An email will be sent out to purchasers from Front Gate Ticketing on Friday at 10:00 AM EST with complete exchange and refund details. 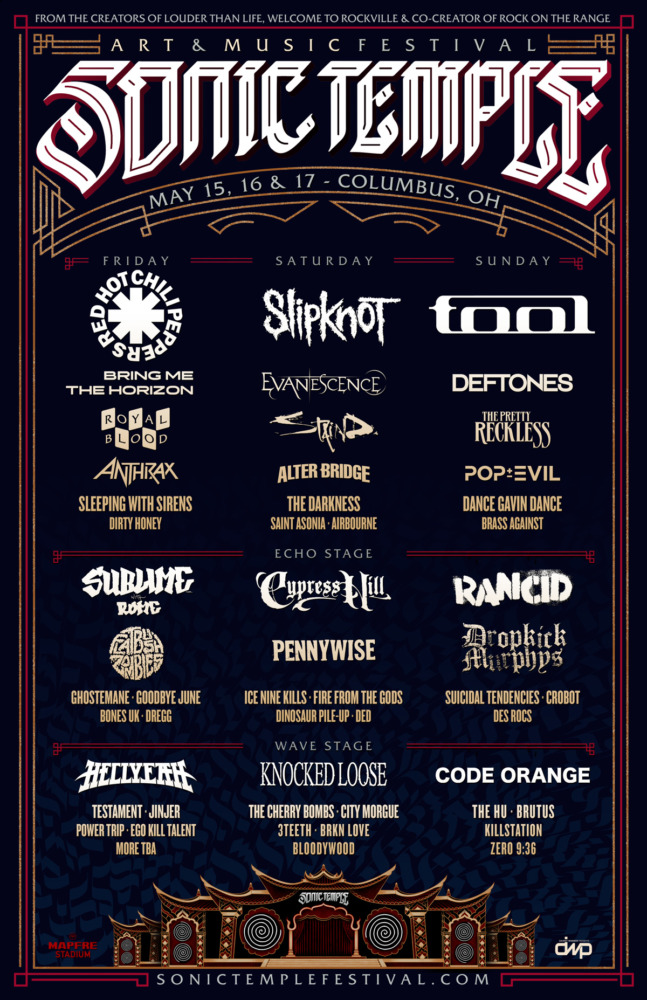 Although Metallica won’t be headlining, the festival organizers were able to snag some pretty insane replacements. Red Hot Chili Peppers and Tool will join Slipknot as headliners for the three-day festival.

“As disappointed as we all are to lose Metallica, I am thrilled that Tool and Red Hot Chili Peppers, dear friends of both DWP and Metallica, as well as two of the biggest rock bands in the world, are stepping up on short notice to keep Sonic Temple on track to be the greatest rock festival in America,” says Danny Wimmer, DWP founder and festival creator.

Other performers Bring me The Horizon, Evanescence, Deftones, Dropkick Murphys, Sublime with Rome and so many more.

When it comes to the art aspect of Sonic Temple, attendees can expect a lot more this year. The festival will be headlined by world-renowned graphic artist and muralist Nychos. Throughout the weekend, there will be art installations, live mural painting, poster artists, and performances artists.

5 Weeks of Rabbit Eye Movement from RABBITEYEMOVEMENT on Vimeo.

I mentioned earlier that food and drinks would be a big component of Sonic Temple, and trust me, there’s a lot to be excited about. Sure, there are the typical rock festival must-haves like craft beer and Monster energy drinks. But there are also some happy surprises, like Heavy Tiki, a bar serving up specialty island cocktails and tropical beats all weekend.

While no one enjoys paying service fees on concert tickets, I think we can all agree that they’re a lot easier to take when you know they’re benefitting something awesome. This year, all tickets will include a $.25 fee that will go directly to the T.J. Martell Foundation.

The T.J. Martell Foundation is the music industry’s leading foundation that funds innovative medical research focused on finding treatments and cures for cancer. The Foundation sources and supports early-stage research projects aimed at developing more effective clinical treatments for patients which otherwise might not be funded.

There are a variety of passes for Sonic Temple available, meaning you can cater your ticket purchases to the acts you’d like to see or purchase one pass for all three days. The ticket prices increase as each additional level sells out, so if you’re planning on attending, you’ll want to snag your passes as soon as possible. The current pricing is:

Deciding which passes you want to buy probably depends heavily on which artists you’re hoping to check out. Below, you’ll find the line-up with performers listed by day, which should make the task a little easier.

For more info about attending Sonic Temple Festival, you can visit their website here.