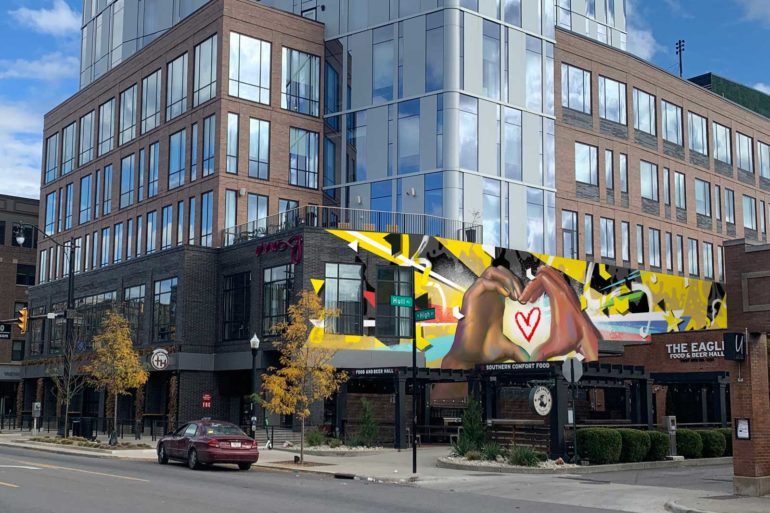 A new mural in the Short North is going to be a love letter to Columbus Crew fans.

The mural is called The Heart of Columbus and it’s being created by local muralist and passionated Columbus Crew SC fan Stephen Davis. Davis is an alum of The Ohio State University and has created numerous public artworks around the city.

The Short North Alliance and the Columbus Crew have partnered to bring this legacy mural to life on the exterior of 800 N. High Street. The building is home to several tenants, including the Moxy Hotel, and was built in 2019.

The mural is personal and passionate, showcasing elements of the new stadium, the Crew’s signature flag, celebartory confetting representing the two-time MLS champions, and more.

“We are excited to be working with the Short North Alliance to present this incredible Crew-themed public-art mural to our community,” said Crew SC President & General Manager Tim Bezbatchenko. “Like the culture of our Club, public art contributes to a community’s identity, fosters community pride and creates a sense of belonging. This piece not only honors the history of our Club and our deep connection to the city, but it captures the passion and pride of our supporters and the ambition we share for the future of the Crew and for Columbus.”

“I am incredibly honored to have been chosen to create The Heart of Columbus’ mural for the Columbus Crew and Short North Alliance,” said Davis. “My intentions behind the mural are for people to feel the love and spirit that this humble midwest city embodies. After a close attempt to move the soccer club out of Columbus the community’s support and love for the Crew kept them in the city, the fans banded together and #savedthecrew! It is that sense of solidarity and togetherness that makes Columbus and it deserves to be celebrated.”

The Heart of Columbus was made possible with support from Columbus Crew SC, the Short North Alliance Art Fund, and Crawford Hoying. If you’d like to catch a glimpse of this masterpiece being installed, swing by 800 N. High Street starting May 10.