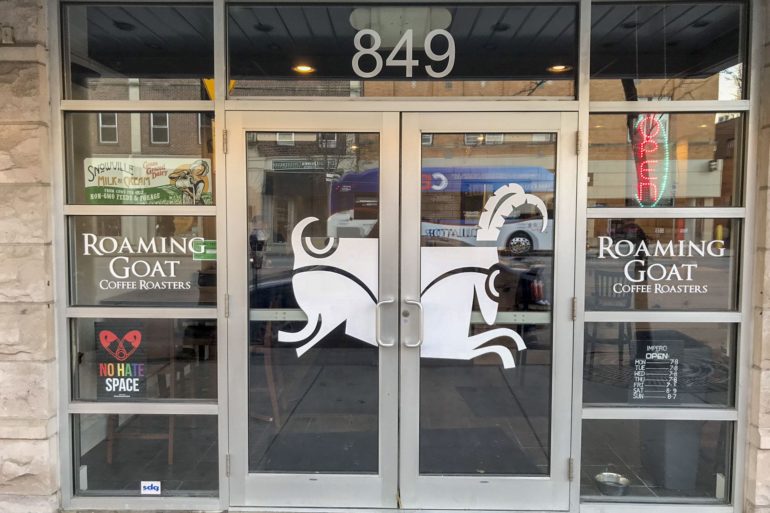 The shop’s choices in renovation contractors, vendors, and collaborations are a textbook example of how to maintain localness in a rapidly changing neighborhood. 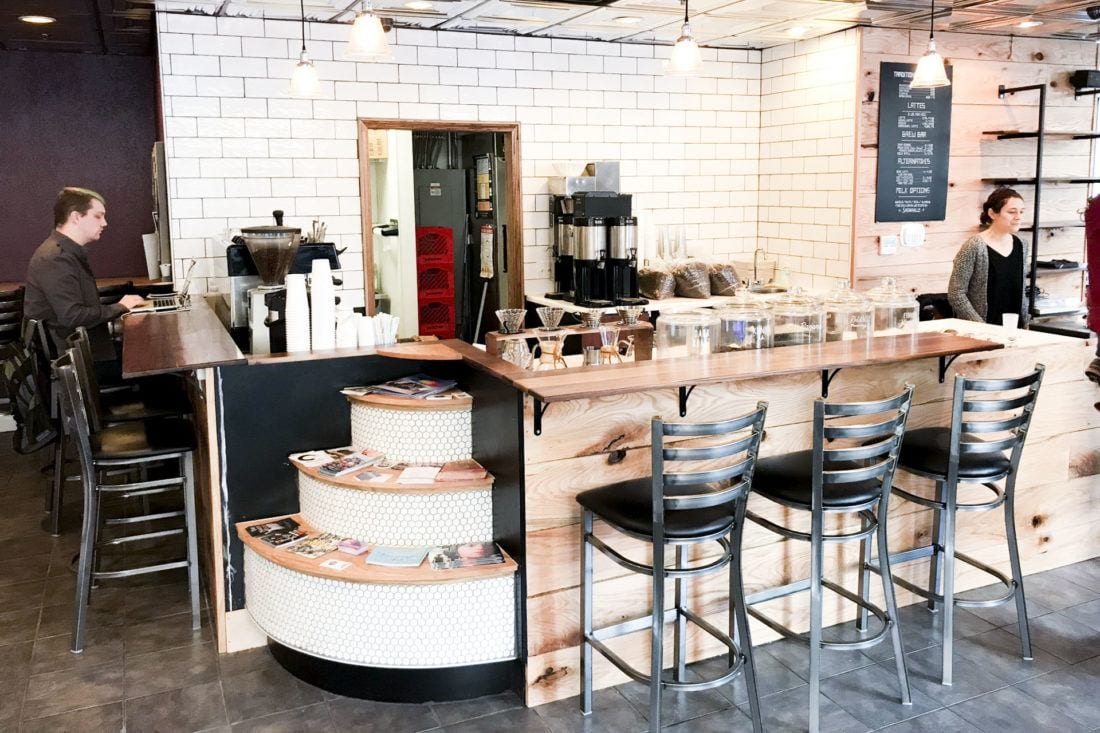 But first things first: what on earth does a roaming goat have to do with coffee?

According to legend, an Ethiopian goat herder found his flock eating the berries of a curious bush. The goats were rowdier than usual, so the herder tried the berry and became unusually alert himself. A passing monk, too sleepy to make it through evening prayers without dozing, inquired about the berries. He was so impressed by their energetic properties that he proposed crafting a beverage to keep him awake. Thus, coffee was born.

Decidedly more chill than the Ethiopian goat herder and his goats are Jason Thomas and Alex Hill.

“I’m not into titles,” jokes Thomas, nursing a Cubano at one of the place’s many walnut tables along the windows. “I don’t really have one. On my business card it just says owner, I guess.”

Hill is the Director of Operations, a title he gave to himself. He sips a cortado across from Thomas. Together they explain how Roaming Goat came to High Street.

Roaming Goat has largely operated under the radar for much of the 21st century. Tim Elkins began a coffee roasting business on the north side of town in 2001. In 2012, Thomas took the reins of the company, then named Royal Coffee, and changed the name to Roaming Goat in 2013. Since then, Thomas has accrued wholesale accounts through restaurants, churches, and vending companies. He’s kept the roasting operation on the north side, near Anheuser-Busch. 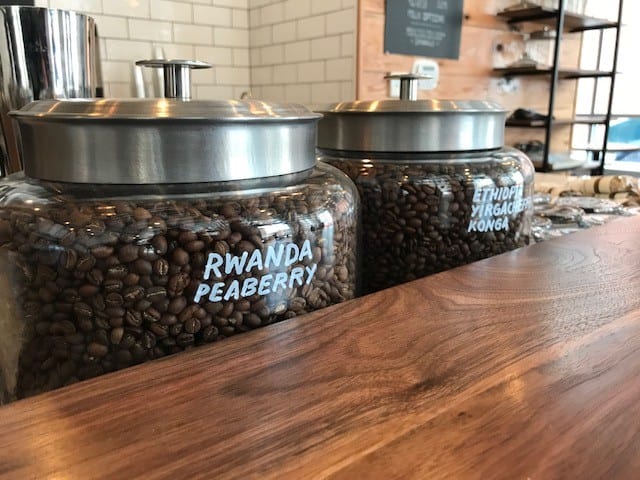 Roaming Goat coffee can be found in 17 Meijer stores in the Mid-Ohio area, as well as local fixtures like the Hills Market, Weiland’s, Lucky’s, and Oats and Barley to name a few. Additionally, some 35 Kroger locations in the Cincinnati and Northern Kentucky area stock the brand.

With the wholesale business doing well, it came time to consider a retail location. The former owner of Impero was interested in selling, and Thomas took him up on the offer.

“I had, in the back of my head, probably for two or three years been thinking I wanted to open a retail space,” mentions Thomas. “I thought this was a good location.” 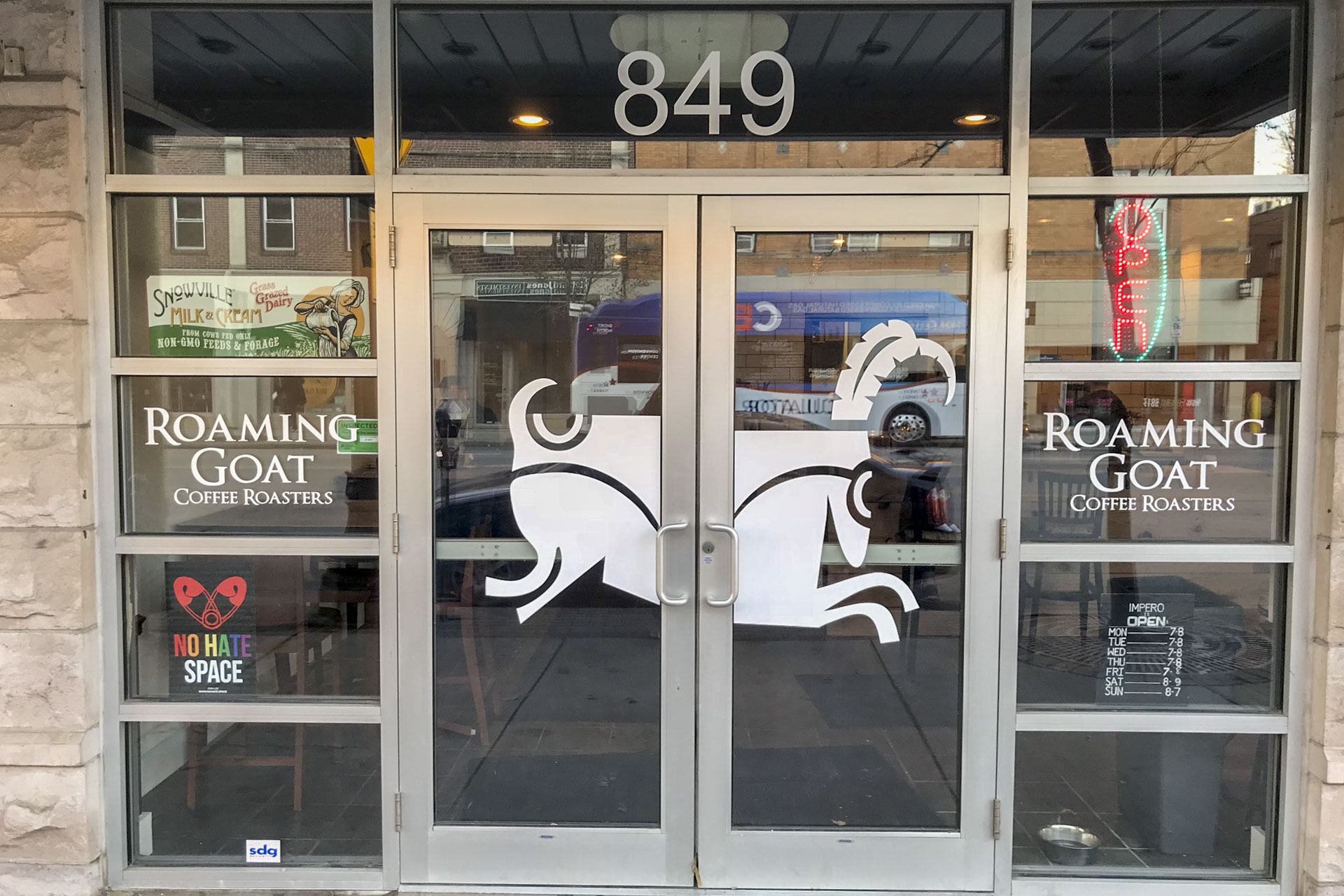 On Christmas Eve of 2016, the transfer was complete. Impero was Thomas’ shop. Rather than rebrand right away, Thomas elected to keep the Impero name for at least six months. During that time, he sought the advice of employees and regular customers. What did they want in a coffee shop? What hadn’t worked in the past? The shop was Thomas’ first foray into retail, so he took the time to listen to feedback before making changes. In the transition, Roaming Goat retained all of Impero’s baristas.

In June 2017, Thomas began the process of rebranding the space. He enlisted the help of interior designer Brooke Vaughn-Sage, now with King Business Interiors. Together, they designed a vision for the coffee shop that would soon become Roaming Goat.

“It definitely needed upgrading,” says Thomas. “I didn’t want to rebrand until it looked the way I wanted it to look.”

“We needed a little bit more of a warm feel in here,” adds Hill. 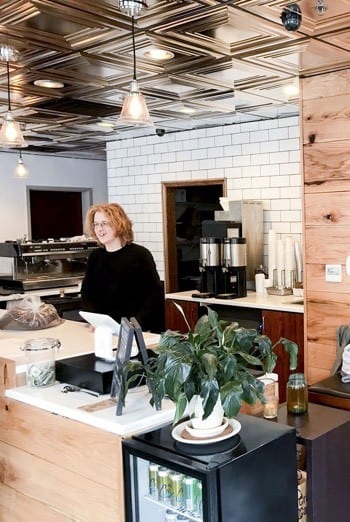 The new space is indeed warm. The first thing people see when entering is a front counter of recycled barn wood. Additional walnut tables and high chairs line the windows along High Street. There’s something of an old-timey feel as well, with a tin ceiling and a subway tile wall behind the counter.

“The bottom of this building put me in mind of Art Deco with the stone work, so I wanted to incorporate some of that,” notes Thomas.

Thomas hired local carpentry companies for the renovation. A Carpenter’s Son supplied the corner coffee table, the bar, and the walnut tables. Norwegian Wood built much of the rest, including the barn wood counter.

The renovation started in November 2017 and was mostly complete by the end of December, in time for a grand opening as Roaming Goat Coffee Company. All told, the new space is an inviting and relaxing respite from the growing bustle of the Short North, but the transition is not complete. STUMP will soon supply plants to spruce up the place. There will also be a consistent lineup of local artwork for purchase.

“Impero did that, and we’re going to continue that too,” says Thomas. “That’s just trying to keep the roots with the neighborhood. A lot of long time locals feel it’s getting too commercialized. It’s just our small way of trying to keep the arts scene going.”

For the grand opening in December and through January, Roaming Goat’s windows were adorned by hand-cut paper snowflakes by Maria Caracciolo. A new artist will fill the space in February. The idea is to feature a new local artist a month at a time. 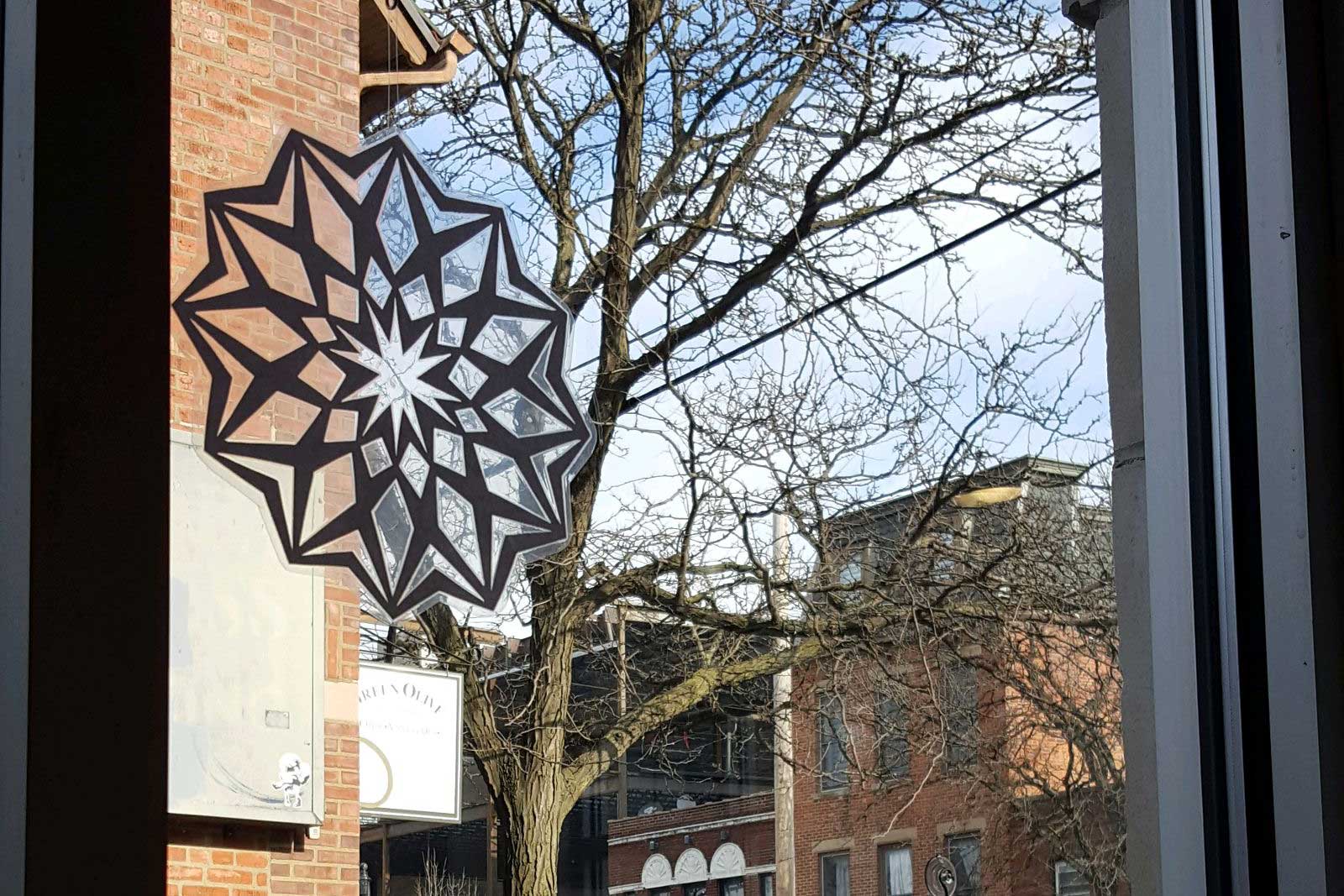 “You can get any of our beans as a pour over, or by wholesale here too,” explains Hill.

The baristas come up with seasonal lattes to entice curious customers. The Honey Latte, a holdover from Impero, is one of the most popular drinks.

The non-coffee elements are all local. Dairy is sourced from Snowville Creamery, and there’s currently a selection of treats from Pattycake Bakery. There’s talk of adding donuts, for which Thomas and Hill will dutifully conduct research in local bakeries. In addition, Roaming Goat will add grab n’ go sandwiches and salads in the near future.

Thomas plans a re-Grand Opening sometime in February, once the last renovations are complete and the last pieces of the puzzle are installed. They’ll also revamp the website and approach Amazon to increase online sales. If everything goes to plan, Roaming Goat will increase its wholesale business in the area and, perhaps within two years, open a second retail location.

In the meantime, keep an eye on those goats.