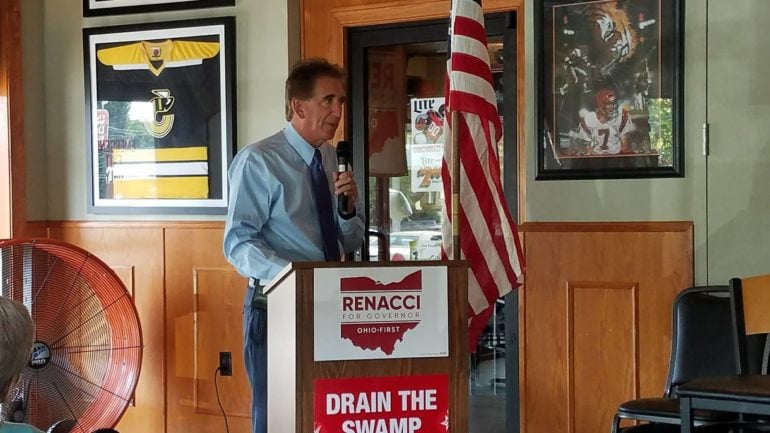 A Ticked Off Renacci Engages In Political Bickering With Jon Husted

The two Republican candidates for Ohio governor seem to be locked in vapid Twitter warfare.

Recently, U.S. Representative Jim Renacci has engaged in a bit of political back and forth name calling with Secretary of State Jon Husted. Seemingly agitated, Renacci called the conservative Secretary of State a “liberal career politician”. He also leaned hard on his political outsider narrative, defending his previous history as a businessman and accusing Husted of doing nothing but running for office.

Renacci’s defensiveness comes in response to a post by Ohio Conservatives, which supports Husted’s campaign for governor.

Career Politician @JimRenacci is the very definition of a “Fat Cat” – one of the richest politicians in Ohio! https://t.co/boN0rO9ZCI #OHGov pic.twitter.com/EmkHvnJwxT

Renacci can’t be too sore about the whole “fat cat” jab, after all the U.S. Representative pretty much started the name calling. In a bizarre and cartoonish political ad released by the governor hopeful just last week, he called Husted, Lt. Governor Mary Taylor, and Attorney General Mike DeWine, all career political “fat cats”.

The commercial might even be considered hilarious if you could just forget that it’s an actual political ad by a man intent on guiding state policy.

It almost calls back to his campaign launch video which shows him cruising the Ohio landscape on an oversized, leather studded motorcycle, desperately trying to appeal to rural Ohio every-mans, despite being one of the richest politicians in the state.

Renacci has actually been fairly outspoken in his unwavering loyalty to the president, even going so far as to pull $20,000 of his own money in TV ad space from the NFL after the tiff between the sports league and President Trump. Only time will tell whether his mudslinging and unswerving loyalty to a president with an approval rating that idles around 35% will actually pay off come election time.