An Adorable Red Panda Was Missing From The Columbus Zoo, But Now She’s Home Safe 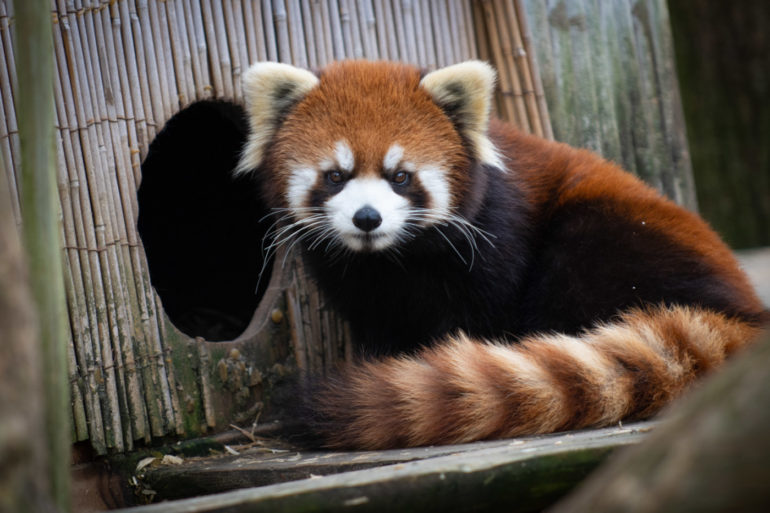 Update: The red panda has been found.

Kora was spotted by two guests who noticed her on the ground among dense foliage between the rhino habitat and the entrance of the Pachyderm Building in the Zoo’s Asia Quest region. As previously suspected by her care team members, she was not far from her habitat and her cubs. The guests quickly reported their sighting to team members at 4:43 p.m., who immediately called the Zoo’s Security and Animal Health teams.

As the team arrived to respond, Kora climbed high into a nearby tree. In attempt to coax her down, the team brought her favorite treats and, when that did not work, they carefully brought out her vocalizing cubs. While she was attentive to their sounds and moved toward them, she remained in the tree just above the rooftop of the Pachyderm Building.

Because rain clouds were moving into the area and the team did not want to risk prolonging her return with evening approaching, the decision was made to tranquilize her. She was asleep just six minutes later and at 5:56 p.m., she fell 10 feet into the waiting net of the response team.

Amid clapping and happy tears from Zoo team members, the sleeping Kora was placed in her crate and taken to the Zoo’s Animal Health Center for evaluation where she was provided care and given a clean bill of health.

One of the zoo’s cutest creatures is missing.

On Wednesday, July 22, the Columbus Zoo and Aquarium discovered that a red panda was missing from her habitat. Red pandas are non-threatening and nocturnal, roughly the size of a raccoon.

The Animal Care staff are conducting an extensive search of the dense vegetation in and around the Asia Quest habitat and the zoo. Other animals that live in nearby habitats have been taken indoors and their habitats are being searched as well.

Red pandas are fantastic climbers and make their homes in trees, using tree hollows to create dens. Footage from the red panda enclosure is being reviewed by staff but so far, there have been no obvious explanations as to how the animal went missing.

This red panda is a recent mom to two adorable cubs who are still nursing. The Zoo team is prepared to hand feed the cubs if necessary, but they are hoping to find the missing red panda quickly. The Animal Care team believes she’s likely close by and that she may return on her own, due to her two cubs.

If anyone in the vicinity of the Zoo spots a small red mammal approximately 19 pounds with a long, fluffy striped tail – likely in a tree – please contact the Columbus Zoo immediately at the Security Dispatch number: 614-582-1844. The Zoo asks that if you see the red panda, you don’t approach it. They are naturally elusive animals and the zoo doesn’t want her to be frightened.