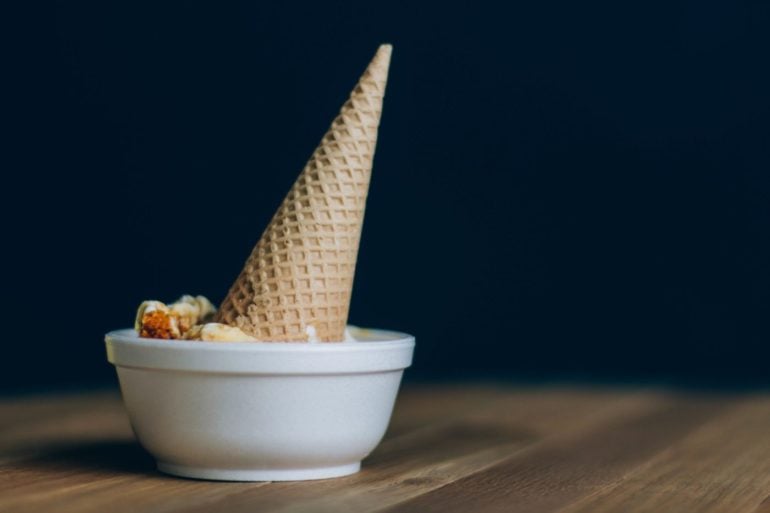 We’re stuck somewhere between summer and fall, and even though we’ve had some cool mornings, it’s still getting pretty warm in the afternoon.

You want some ice cream, but summer flavors just aren’t doing the trick. According to Google Trends, the most searched ice cream in the country is Cookies and Cream. Although I wouldn’t say no to a cone, it’s not what the people of Ohio are craving.

The most searched ice cream in Ohio is (drum roll please) pumpkin ice cream. That’s right. All year long, the basicness of Ohio is coming out in our ice cream habits. Luckily, we’re blessed to live in the ice cream capital of America. Here are the best places in Columbus to grab some pumpkin deliciousness.

Graeter’s has a seasonal pumpkin ice cream that is so creamy and delicious. They usually start offering it in late September/early October, so be on the lookout.

Pumpkin ice cream is already on the menu at Johnson’s. Pair it with a scoop of their Cinnamon ice cream and I promise, your brain won’t just be frozen, it will be blown!

Pumpkin Pie ice cream? Heck yes. Simply Rolled is serving up this fall treat, which consists of actual pumpkin pie mixed into their creamy vanilla base and sprinkled with cinnamon.

Starting September 30, Whit’s will feature their Pumpkin Spice Custard as their flavor of the week. The custard treat will probably be in high demand, so don’t wait too long to grab some for yourself.

Pumpkin Cake Roll ice cream is a thing, thanks to the geniuses at Jeni’s. The ice cream is a combination of ice cream, cream cheese, pumpkin, brown sugar, warm spices, and vanilla-spiced cake pieces. It’s available in the shops and online.